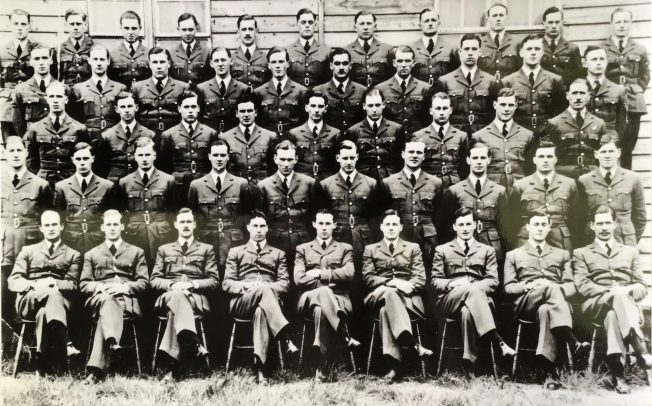 We are indebted to Colin Lee for this wonderful photo and the caption information to accompany it.

Some of these men were posted to 253 Squadron and served at RAF Kenley during the Battles of France and Britain.

John Greenwood (7th left in the front row) recalled his time at No.2FTS:

May 1st. 1939: We were all posted to No 2 FTS Brize-Norton in Oxfordshire, here we were divided into two lots, those to train on single engine North American Harvards, and those to train on twin engine Airspeed Oxfords, it was my lot to be on twins. There for 6 months I flew 80 hours duel and solo, during which time I did four hours dual, and 2 hour solo night flying, navigation cross country’s, forced landings, aerial bombing and machine gun firing at Porthcawl armament camp, after which we were awarded our wings, and posted to our new units in November.

Back row (from left)