You are here: Home>History>Timeline of RAF Kenley>Battle of Britain>Kenley's 'Hardest Day' - An Introduction and list of Casualties

Kenley's 'Hardest Day' - An Introduction and list of Casualties

In 1940, Hitler knew he had to destroy the RAF’s Fighter Command to gain air superiority and make the invasion of Britain possible. This had to be achieved before Winter set in.

Six days of attacks by the Luftwaffe, with substantial losses on both sides, had been followed by an ominous silence on Saturday,17th August, 1940, but it wasn’t to last. On Sunday 18th August, the peace was shattered by three major assaults intended to knock out Fighter Command for good. 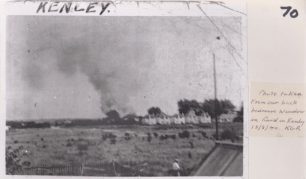 A remarkable photo of the smoke rising over RAF Kenley as the hangars burnt after the raids on 18/8/1940. (Ken Raffield).

18th August, 1940, was christened “The Hardest Day”, because it was the day of The Battle of Britain that saw the highest losses of aircraft on both sides. 100 German and 136 British aircraft are believed to have been destroyed or damaged. You can read more about the aircraft involved here.

The targets were the airfields at Kenley, Biggin Hill, Hornchurch and North Weald, Gosport, Ford, Thorney Island, and the radar station at Poling. Fighter Command’s defending Spitfires and Hurricanes would either be destroyed on the ground by bombing, or in the air by large numbers of escorting Messerschmitts.

RAF Kenley was singled out for a complicated pincer attack, by Bomber Geshwader 76, which, if successful, would destroy the airfield for good.

However, the operation did not go according to plan. Poor weather conditions made it difficult for the bombers to get into formation near Calais.

The Dorniers of the 1st and 3rd Gruppen were only six minutes late, but they had already overtaken the Junkers 88’s of the 2nd Gruppe. This had ominous consequences for the low-flying 9th Staffel, who arrived at Kenley first and found the airfield unexpectedly intact and fore-warned of their arrival. You can read more about Fighter Command’s efforts to counter the raid here.

Only a few minutes after the 9th Staffel’s devastating low-level raid, the onslaught began again as the main group of 27 Dornier 17’s arrived over Kenley and began to drop their bombs from high altitude. Over 150 bombs missed the airfield and caused a great deal of damage in the surrounding areas. Railway lines were hit and Valley Rd was impassable. A number of houses in Whyteleafe and Caterham were destroyed, while many more were extensively damaged.

Finally, the Junkers 88 dive bombers arrived. Seeing the smoke rising over Kenley, it was obvious that the timing of the raid had gone awry, so they headed for their alternative target – West Malling. 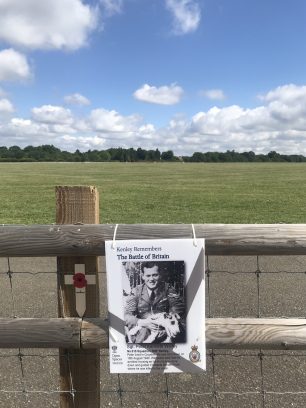 Sgt. Walley remembered at Kenley airfield along with the other RAF Kenley casualties of the ‘Hardest Day,’ for the 80th anniversary of the Battle of Britain, 2020. (Linda Duffield).

Kenley Service Personnel killed as a result of enemy action on The Hardest Day:

One Private of the 12(HD) Queen’s Royal Regt. was severely wounded and died on 20th August.  He was:

Killed in action at Kenley Waterworks:

Pilot Officer D. Looker – No.615 Squadron, severe shock. Hurricane L1592 (now on display in the Science Museum, London) damaged by Messerschmitt 109 of Fighter Geshwader 3 near Kenley at 1.23pm. Looker force-landed at Croydon and received further damage from their anti-aircraft gunners.

Pilot Officer Petrus “Dutch” Hugo – No.615 Squadron,  wounded. Shot down by Messerschmitt 109 of Fighter Geshwader 3, near Kenley at 1.23pm. Hurricane R4221, KW*M,  crash landed to the north of Orpington, damaged beyond repair.

No.111 Squadron, RAF Croydon, were scrambled to counter the attack by the 9th Staffel, KG76, over Kenley. 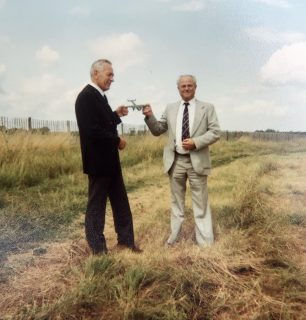 Sergeant H. Deacon – Rolf Von Pebal mentions a Hurricane being hit by the gunner aboard  Reichel’s Dornier. This is believed to be Deacon’s aircraft, N2340, which crashed on the edge of woods near ‘The Bull’  pub, Chelsham Green. Deacon baled out wounded around 1.30pm and came down near ‘The Harrow,’ Warlingham.

Damage to Aircraft on the Ground at Kenley

Damage to Kenley’s Buildings and Facilities 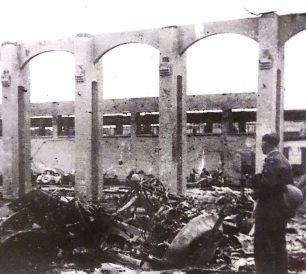 The remains of a burnt out hangar after ‘The Hardest Day.’

Civilian Casualties in the Surrounding Area

Roughly 150 bombs fell in the area around RAF Kenley. Alfred Price mentions six people were killed and twenty-one seriously injured, in his book “The Hardest Day.”
So far, we have identified five civilian casualties in Caterham, Kenley and Coulsdon.

Robina Elizabeth Hatch of 52 Malcolm Rd, Coulsdon, aged 79. Killed by a bomb splinter while in an air raid shelter at 50 Malcolm Rd.  She was the widow of Alfred James Hatch. Buried at Bandon Hill Cemetery, Plot P19a. 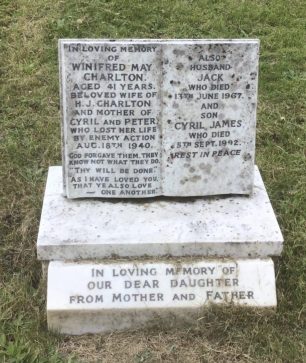 The grave of Winifred May Charlton. Photo: Kev Barnes.

Winifred May Charlton (nee Atkins) died at her home, 22 Oak Rd, Caterham, aged 41. She was the wife of Harry James Charlton and worked as a shop assistant prior to getting married. Peter Allam’s family remember that a child was killed in Oak Rd, but so far we have failed to find supporting records. 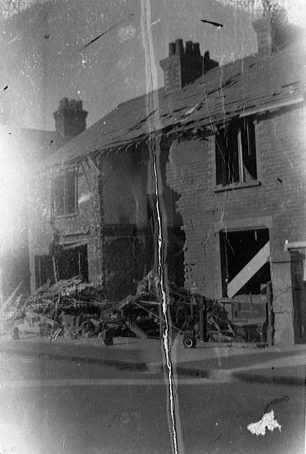 Peter Allam’s Grandprents’ home in Oak Rd, Caterham, after the bombing of ‘The Hardest Day.’ (Peter Allam). You can read their story here.

Kenley Revival has been privileged to collect several eye-witness accounts of the raids. Here are some of the most notable.

Despite the severity of the raids which took place on the 18th August, 1940, RAF Kenley stood firm. The airfield was back in use the following day.

Many thanks to Marcelle Williams (for researching Joseph Walter Williams) and Colin Lee.