You are here: Home>History>Timeline of RAF Kenley>Battle of Britain>My Mum's War - The Story of Flight Sergeant "Pat" Glover

My Mum's War - The Story of Flight Sergeant "Pat" Glover

My Mum was born 8th October 1915 during an air raid over London, by Zeppelin LZ.44. This was its second and final raid; on its return journey it flew into a mountain at Schnee Eifel and was wrecked.

Marjorie (known as ‘Midge’ by her family) lived with her parents and her brother and sister at Thornton Heath, Surrey. She did well at school and gained a place at Grammar School, but was unable to take up the place as the family needed her to go out to work. 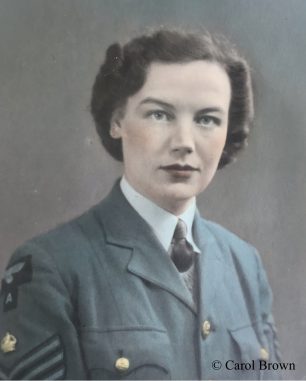 On 15th September 1939, Marjorie was one of the first women in her area to sign up. She joined the WAAF and was posted to Kenley Aerodrome.

Sept 15th 1989. I really can’t believe it was 50 years ago today, when I received a letter telling me to report to RAF Kenley forthwith! Wearing a navy suit and very high heels, I set out, but of course, I got off the bus at Kenley station instead of Whyteleafe, and walked miles to the aerodrome, coming in across the airfield instead of through the main gates.

It was great at Kenley – I was there all through the Battle of Britain – I made, and lost, many friends. In spite of the bombing, we managed to get up to London and Croydon to celebrate medal-winnings, or for dances, or even just for a good meal. Once, coming back from the local pub, we saw incendiary bombs had fallen on the roof of a bungalow and it was on fire, so we spent about half an hour or so helping the occupants to put out the flames – the outcome of which was that I got 4 days confined to camp for being late back! 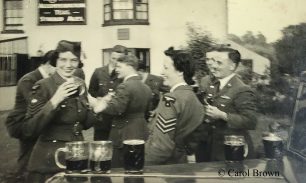 Marjorie soon settled into her new job as Equipment Assistant in the Stores, which supplied all personnel and aircraft with, “all the bits and pieces needed”. She also gained a new name and was now known as “Pat” Glover. It was a trend to call all people with the name Glover, “Pat” after the famous footballer, just like everyone called Clark ended up being “Nobby!”

Invitations to social evenings were issued by the Sergeants Mess from time to time. Two cards from Kenley show that she was addressed as ‘Miss Glover WAAF’ in July 1940 and as ‘Corporal Glover (Pat) WAAF’ in December 1940. 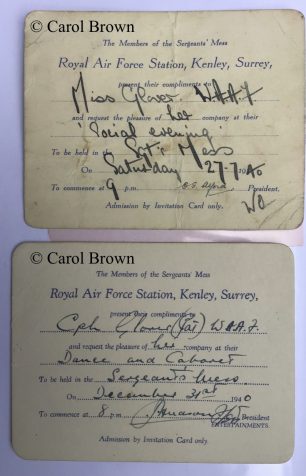 The war really got going in July 1940 at the start of the Battle of Britain. Kenley Aerodrome was badly hit by a bombing raid on 18th August 1940. My Mother told me that the whole airfield was taken by surprise and when the raid started everyone just dived for cover where they stood. She and a friend sheltered behind a building until it was safe to come out. It was only then that they realised they had been behind the fuel dump! A lucky escape! 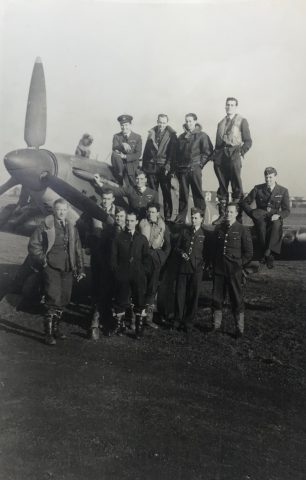 No.615 Squadron, with Hurricane, probably taken at RAF Northolt, November 1940. On the left, Joe Kayll, Petrus “Dutch” Hugo (hand on exhaust), Donald Stewart and “Midge” the dog on the nose of the aircraft, Claude Strickland sitting on wing. (Carol Brown)

There were some casualties and devastation everywhere. It must have been terrifying. So many pilots and crew were lost over the next few months. When I asked her how she managed when friends did not return from sorties, she was very matter-o-fact and just said, “That was the war”. It is hard for us to understand today, what it was like to be bombed and lose so many family, friends and comrades.

1941 brought a posting to Gloucester and promotion to Flight Sergeant.

In her own words:

In 1941, I was posted to Gloucester to start a WAAF Recruiting Depot; we had 2-3 thousand a week (girls) joining the Force. In March 1944 I went to Egypt with the first contingent of WAAF to go abroad. I was stationed at a camp near the Bitter Lakes – about 98 miles from Cairo, and we lived in tents in the sand. We spent our leaves in Cairo or Alexandria and of course we saw the Sphinx and the Pyramids. When the war ended in September 1945, I came home and became a civilian again.

She summarises her wartime experiences:

26th September 1989. Today 44 years ago, I left the WAAF – it was a sad day really. I had spent the six years at Kenley, Gloucester and several other places around the country for short periods, then finished up in Egypt. We went out on the Monarch of Bermuda in the company of soldiers, airmen and a few civilians. I was put in charge of the WAAF contingent. After a few days at sea, we were told that some of the airmen had contracted scarlet fever, so I had to line up my girls every morning and issue them with some awful looking bright yellow stuff with which to gargle. In spite of the fact that some of the girls did not bother, and were even meeting the airmen (supposed to be in quarantine) in the evenings, I was congratulated by a senior Medical Officer in Cairo because none of the WAAF were infected! Our ship had to leave the convoy to put off the fever cases at Gibraltar, then had to go full speed to catch them up in the Mediterranean. It was a lovely journey.

Mum’s posting was on the first convoy of shipping allowed in to the Mediterranean once it had been cleared and was open again. Before, all shipping had had to go around the Cape of Good Hope and through the Suez Canal. 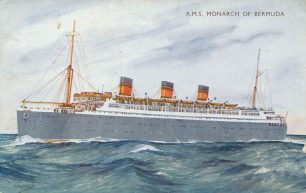 Postcard of “The Monarch of Bermuda” before she became a troop carrier.

She was stationed at Maintenance Units 106 and 107 at Kasfareet, Egypt and had a staff of 16. She led the 6th Anniversary parade of the WAAF at El Khanka and she was popular with everyone, especially a lad called Ahmed, who would run errands for her and help whenever he could! 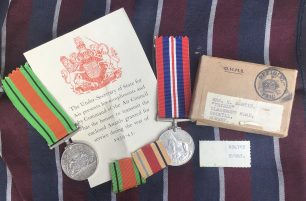 “Pat” went back to live with her parents in Burton-upon-Trent after her release. She found out that they had cleared her room of all her possessions whilst she’d been away! 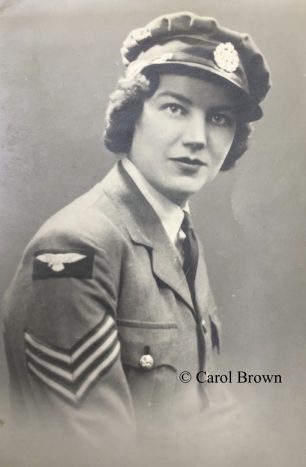 She married Edward Penfold Martin on 3 August 1946 at Epsom Register Office and they lived in Reigate for the rest of their lives. They had two daughters, Linda and Carol.

You can see some of F/Sgt. Glover’s documents, badges and keepsakes here.

Pat’s letter from “Dutch” Hugo, No.615 Squadron ace is here.