Aeroplanes from "The Hardest Day"

This is a brief outline of the planes that took part in the attack on and defence of the airfields defending London and south-east England on Sunday 18 August 1940, specifically RAF Kenley.

Although not the first or last attack of the Battle of Britain, the 18 August was known as “the Hardest Day”, for good reason – at the end of what started as a bright Sunday summer afternoon ended with 10 people killed, mostly at Kenley, with 19 wounded and around 63 RAF fighters destroyed, and a further 39 damaged. The Luftwaffe fared even worse: 94 aircrew killed plus 65 wounded or captured, along with around 70 aircraft destroyed and 31 damaged.

The planes shown below are in alphabetical order rather than their “importance” in the battle.

Commonly known as the “Flying Pencil” because of its shape, the Do17 was originally built in 1934 as a fast mail carrier and passenger plane for LuftHansa. Rejected by the airline in this capacity, it was taken up by the German Air Ministry as a high-speed bomber, and saw 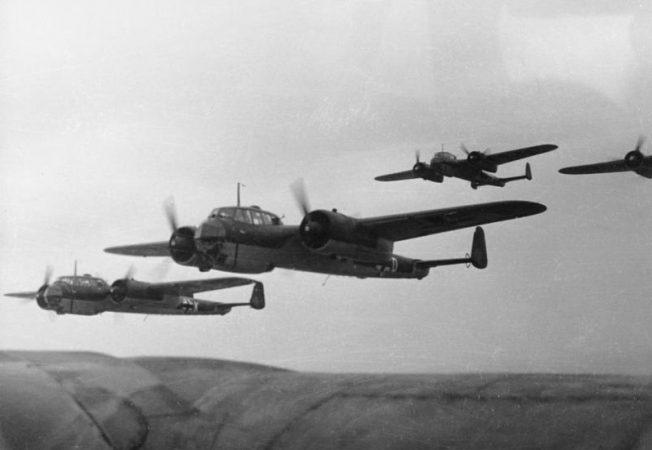 service in the Spanish Civil War. Dornier Do17s, from 9 Staffel KG76, were the main bombing attack force against Kenley Airfield on 18 August 1940, when 9 were shot down and destroyed.

The first RAF single wing fighter and the first capable of more than 300 mph, the Hurricane was the backbone of  Fighter Command, proving to be adaptable and versatile. During the first year of the War, it shot down more than half of the enemy aircraft destroyed. It was later used in the desert campaign as a light bomber and tank buster, on the sea to protect shipping convoys, as a night fighter in the Far East, with and alongside Soviet forces in Russia.

The Hurricane was designed in 1934 by Sydney Camm, and entered service with the RAF in 1937. They were used mainly for interception of raiding bombers as their speed was below that of the Messerschmitt 109. 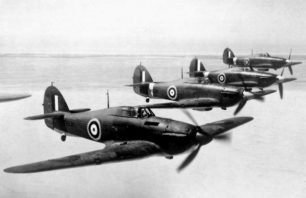 The Hurricane was also used in early attempts at the interception of Luftwaffe night time raids, albeit unsuccessfully.

The sea version, known as the “Hurricat”, was part of the Merchant Ship Fighter Unit formed to protect shipping convoys from enemy planes. It was launched by catapult from the ship that it was protecting – there was no return to the ship – the pilot had to make it back to land or ditch in the sea, hopefully to be picked up later.

Originally designed in 1935 as a civilian transport plane, it was delivered to the Luftwaffe in 1936, and a year later took part in the Spanish Civil War. As a result of lessons learnt on operations in Spain, Poland and France the Luftwaffe initially launched it on raids against Britian with no direct fighter escort – a tactic that was to prove costly in the Battle of Britain and it took considerable losses. It did however, remain a mainstay until towards the end of the war, due to lack of suitable replacement models. 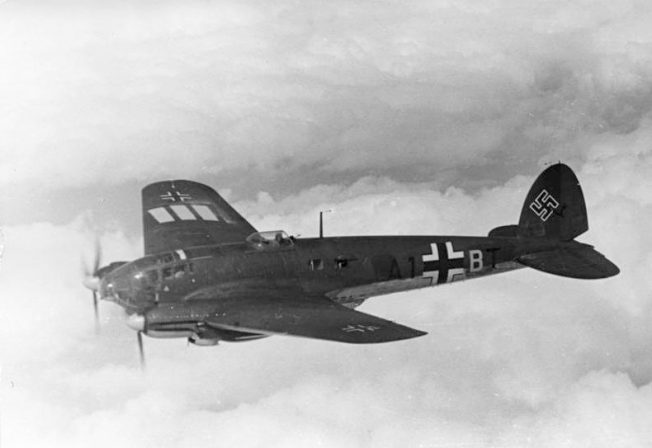 The Ju87 “Stuka” dive bomber first flew in 1935, originally with a Rolls Royce Kestrel engine, and gained notoriety during the Spanish Civil War and on the beaches of Dunkirk, releasing its bombs from a near vertical dive, its engine screaming like a banshee and producing a psychological fear and reputation not matched by its actual powers. Undefended civilians and troops were its match – when it came up against the fighters of the RAF it was soon dispatched, as its shortcomings – slow and cumbersome – left it wide open to fighter attack. Large numbers were shot down during the Battle of Britain. As a result of cumulative losses, it was withdrawn from the battle following the “Hardest Day”. 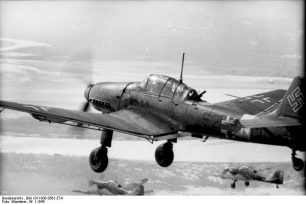 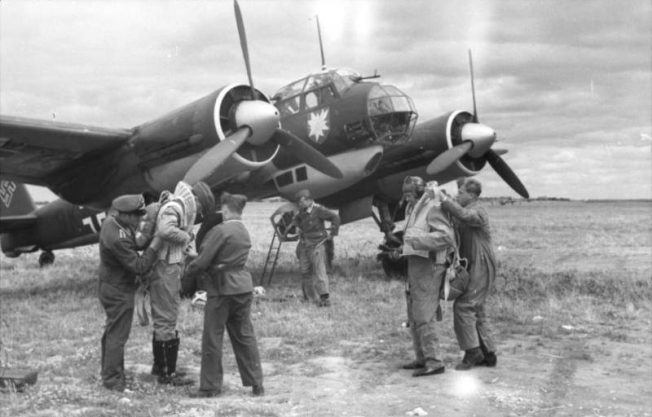 Designed in 1935 and first flown in 1936, the Ju88 became the most versatile and widely-produced German bomber of World War II with over 15,000 produced in various forms. It was adapted to perform many roles apart from that as a bomber, particularly night fighter, close support and reconnaissance.

The Bf109 was first developed in 1934 under the guise of a civilian plane, and the first prototype flew in 1935. Again, it was tried and tested in the Spanish Civil War and was widely recognised as a superior fighting machine. Initialy used in the “free hunt” role to escort bombers or engage British fighters, losses in 199 Staffeln increased once they were ordered to provide a close escort to the bombers. The Bf109 remained a mainstay of the Luftwaffe fighter force thoroughout the war and was adapted to other roles; also being used as a fighter-bomber during the Battle of Britain.  Some were still in use by the Spanish Air Force in the 1970s, ironically powered by the Rolls Royce Merlin engine. 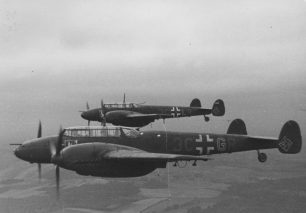 The Bf110 saw continuous service throughout the War, despite poor performance against British fighters in the early part of the War. It first flew in 1936, but was delivered too late to participate in the Spanish Civil war where many of its contemporaries gained valuable operational experience. It first fought in Poland in 1939, but was found wanting in the Battle of Britain against the faster, more agile Spitfires and Hurricanes. To defend against attacks by RAF fighters Bf110 crews would adopt a defensive circle with each aircraft covering the rear of the aircraft ahead, even this tactic did not prevent them from suffering heavy losses. It was therefore adapted for other roles, including as a night fighter to try to stem the Allied bombing of Germany.

Without doubt the most famous aircraft of World War II and beyond, Reginald Mitchell’s classic design was built in greater numbers than any other British aircraft, appearing in 40 different versions and in continuous production throughout the War. It was test flown in March 1936, reaching nearly 350 mph. Sadly, Mitchell died before it entered service with the RAF, which by the start of the war had 306 Spitfires at their disposal.

Whereas the Hurricane was seen as the “work horse” of the RAF planes, the Spitfire was leading-edge technology and constantly developed, refined and improved throughout the War and beyond. Upgraded versions were particularly successful against the V1 flying bombs. During the 12 years it was in production, 20,000 Spitfires of all versions were built.  It was popular with its pilots and unpopular with its opponents, and it is without doubt the 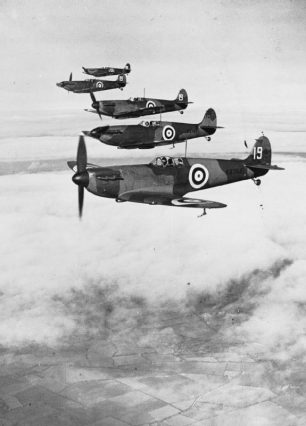 most iconic aircraft of the Second World War – a status that it retains today.