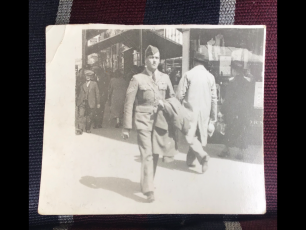 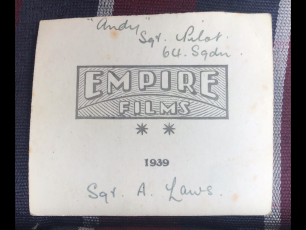 Reverse of the photo above
©️Carol Brown (From the collection of F/Sgt. 'Pat' Glover 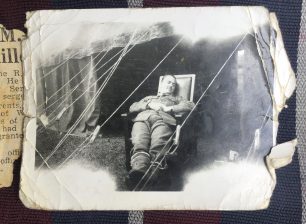 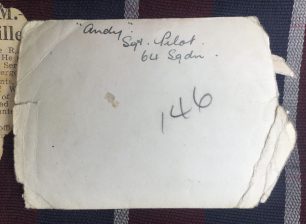 Reverse of photo above
©️Carol Brown (From the collection of F/Sgt. 'Pat' Glover 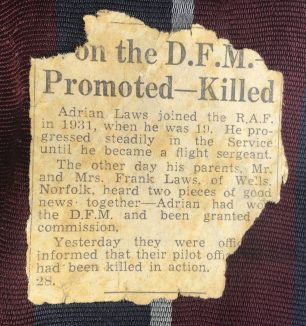 A newspaper clipping from the collection of F/Sgt. 'Pat' Glover, who served at Kenley during the summer of 1940, when Adrian Laws was with 64 Squadron.
Carol Brown

Adrian Laws tragically lost his life on the 30th September, 1940 in a mid-air collision while stationed at RAF Leconfield. As an experienced Spitfire pilot, he was helping newly qualified pilots with flying practice. The accident caused the entire rear portion of Adrian’s aircraft to break away. His Spitfire went into a dive, bursting into flames when it hit the ground. Adrian is believed to have been killed instantly. Just two days prior to the accident, he had been promoted to Pilot Officer.

Adrian Francis Laws (known as Andy to his colleagues) was born to shopkeepers Francis and Dorothy Laws (nee Fanthorpe) on the 10th August 1912 in East Dereham, Norfolk.

At 19 years old, Adrian enlisted with the RAF on the 30th March 1931, as an Aircraft Hand, training as a Storekeeper. The following year in November 1932, he was posted to the Middle East and whilst there, applied for Pilot Training. Having been accepted, he started flying at No.4 Flight Training School in July 1935 in Abu Sueir.

On the 20th April 1936, Adrian joined 64 Squadron at Ismalia as a Sergeant Pilot/Storekeeper. They returned to the UK in September 1936 and Adrian completed his training on Hawker Demons. In April 1937, whilst still with 64 Squadron, he became a Pilot/Equipment Assistant.

64 Squadron arrived at RAF Kenley on the 16th May, 1940 shortly after converting to the Spitfire Mk 1. On the 1st July, 1940 Adrian was promoted to Flight Sergeant. The squadron were in the front line as the Battle of Britain began and Laws added to his tally of victories during an intense period of combat.

After the trials of 18th August (the ‘Hardest Day’), Fighter Command redeployed 64 Squadron to RAF Leconfield in Yorkshire for a rest and the training of new pilots- during their time at Kenley, they had lost five pilots in the Battle of France and Dunkirk and then another five during the Battle of Britain. This didn’t mean they were taken off active duty but they weren’t on the front line and had the chance to recuperate.

The King has been graciously pleased to approve the under-mentioned award, in recognition of gallantry displayed in flying operations against the enemy :- Awarded the Distinguished Flying Medal – 514143 Flight Sergeant Adrian Francis Laws. The Airman has taken part in numerous operational flights since May, 1940.  He has destroyed five enemy aircraft and damaged another two.  His initiative, courage and tenacity have been outstanding.

Following that, on the 28th of September he was promoted to Pilot Officer.  He was very well liked by his colleagues who thought his promotion was well deserved! His good friend and fellow 64 Squadron pilot, Flt  Lt Arthur G Donaghue DFC, wrote in his book ‘Tally-Ho! Yankee in a Spitfire’:

29th September, Adrian appeared in the Officers Mess for the first time, wearing his new uniform as an officer, with the pretty, striped purple and white silk ribbon of his DFM looking very neat under his wings on the left side of his chest.  If anyone deserved a commission and the right to wear the King’s uniform, he did.  He had been a mainstay of the squadron all through the time of Dunkirk, acting as leader of the squadron’s rear guard section most of the time, often with pilots of higher rank following him in his section: and he had certainly served his King and Country well.

His parents received the two pieces of good news together, but sadly within a short time later, they were to be officially informed of his death.

Next morning Adrian had to give a group of new pilots some practice flying before we went to the target range; so as I was badly in need of some practice too I went for a little cross country jaunt in my machine, familiarising myself with our present sector of operations.  While I was up I could hear distant voices over the R/T which I knew were those of Adrian and the pilots he was flying with.  When I heard them plainly I could tell it was usually Adrian giving one of the others some order, or coaching them on their flying.  I didn’t pay much attention to what was being said, but I noticed that when I was returning to the airdrome Control seemed to be calling ‘Yellow One’ and having difficulty in getting a reply. The leader of Yellow section was Adrian and he wasn’t having trouble with his R/T.  Percy (Percival Beake), ran out to meet me as I taxied in and with agonised face told me, Adrian and Fred (Sgt Frederick Vinyard) have collided and Adrian’s “gone in” and looks like there isn’t much hope! There wasn’t.  After half an hour’s dumb sad waiting around the telephone in our pilots’ hut we heard the story.  His tail had been sheared off and his machine had gone all the way down, tumbling over and over, and for some reason he hadn’t bailed out.  Fred had managed to land safely at another airdrome, as his machine wasn’t badly damaged. Just another little sacrifice among the many thousands to curb one man’s savage desire for power, of course; but I think for most of us in the squadron the loss of Adrian was one of the most painful we’d had to bear’.

Two weeks after Adrian died, his wife, Mary gave birth to their first born, a daughter Susan, who he would never meet.

At just 28 years old, Adrian was laid to rest in the Wells Next-the-Sea Cemetery, Norfolk, Grave 101.

Photographs from the collection of F/Sgt. ‘Pat’ Glover, reproduced with the kind permission of Carol Brown.
Sources:
Tally-Ho! Yankee in a Spitfire by Arthur Donahue DFC
Men of the Battle of Britain by Kenneth G Wynn
https://www.cwgc.org/find-records/find-war-dead/casualty-details/2764568/ADRIAN%20FRANCIS%20LAWS/
https://www.tracesofwar.com/persons/49641/Laws-Adrian-Francis.htm
http://www.bbm.org.uk/airmen/LawsAF.htm