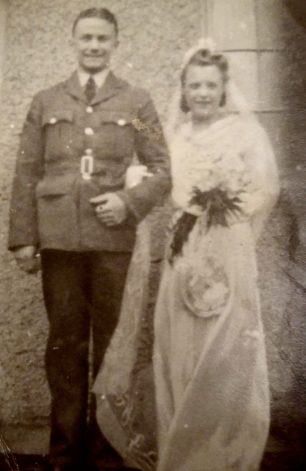 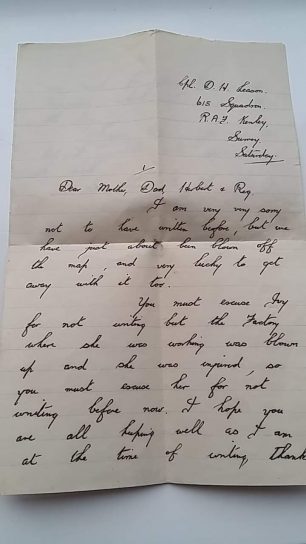 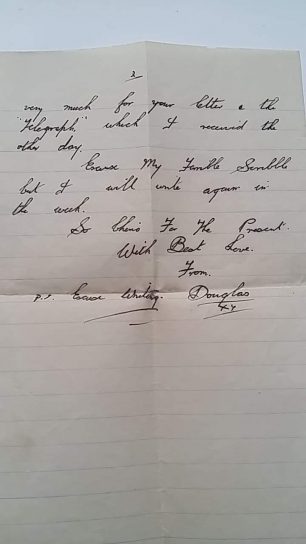 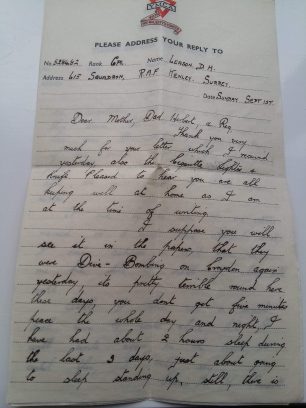 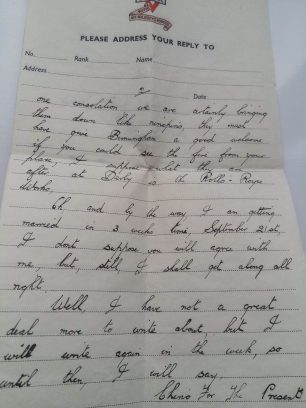 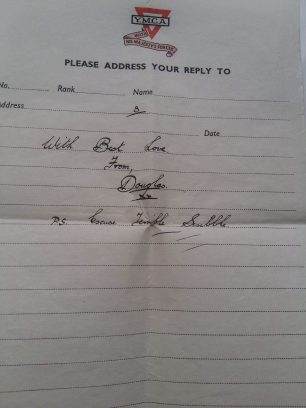 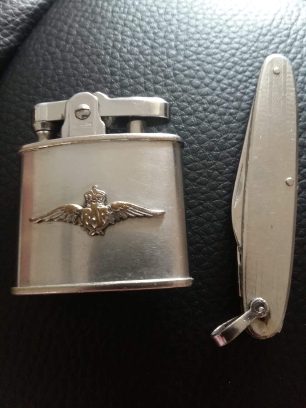 The cigarette lighter and knife which Douglas refers to in his letter.
Tony Leason

Douglas Harry Leason served in the RAF from the end of January 1936, until November 1945. We don’t have many details about his service, but know that he was with No.615 Squadron in France and at Kenley during 1939/1940.

Here are two letters which he sent home to his family. The first might have been written on 24th August, 1940, the week after the bombing of Croydon on the 15th, when the Bourjois factory was hit, and the ‘Hardest Day’ raid on Kenley on Sunday 18th.

I am very sorry not to have written before, but we have just about been blown off the map and very lucky to get away with it too.

You must excuse Ivy for not writing but the factory where she was working was blown up and she was injured,  so you must excuse her for not writing before now. I hope you are all keeping well as I am at the time of writing. Thank you very much for your letter and the “Telegraph” which I received the other day.

Excuse my terrible scribble but I will write again in the week.
So Cherio For The Present
With Best Love,
From
Douglas xx
PS Excuse Writing.

Thank you very much for your letter which I received yesterday also the cigarette lighter and knife. Pleased to hear you are all keeping well at home as I am at the time of writing.

I suppose you will see it in the papers, that they were Dive-Bombing on Croydon again yesterday, it’s pretty terrible round here these days, you don’t get five minutes peace the whole day and night. I have had about 2 hours sleep during the last two days, just about going to sleep standing up, still, there is one consolation, we are certainly bringing them down like ninepins. They must have give Birmingham a good welcome if you could see the fire from your place, I suppose what they are after in Derby is the Rolls – Royce Works.

Oh, and by the way, I am getting married in three weeks time, September 21st. I don’t suppose you will agree with me, but, still, I shall get along all right.

Well, I have not a great deal more to write about, but I will write again in the week, so until then, I will say,

Douglas and Ivy did indeed get married and lived in Coldharbour Rd, Waddon. They had two children, Douglas and Denise, but tragically, Denise passed away aged just 2 1/2. Sadly, Douglas and Ivy’s marriage ended in divorce after the death of their daughter. Douglas never re-married, and lived out his days in Purley.

You can see more of F/Sgt. Leason’s photographs and documents here.

We are indebted to the Leason family for sharing their story. Tony Leason would like to dedicate this article to the memory of his Father, Douglas Leason, and Grandfather, F/Sgt. D. H. Leason.