You are here: Home>Keywords>Battle of Britain>Colour Blind and in Bomb Disposal!

Colour Blind and in Bomb Disposal! 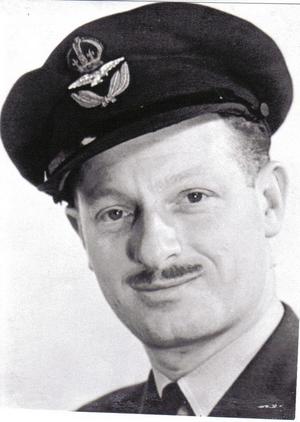 Despite normally being happy being at the centre of attention, he was most modest when it came to his wartime exploits. He was colour blind … and in bomb disposal! In fact, at the end of the war, he was in charge of clearing bombs, mines, booby traps etc. from the whole of Holland and was awarded an M.B.E.

In 1940, not wishing to enlist into the Army, he volunteered for the RAF. But shovelling coal in Stafford was not his idea of the RAF so he volunteered to join Bomb Disposal.

He was instructed to report to Hollywood – but to his chagrin it was Northern Ireland, not America! Not only did he know nothing about bomb disposal but neither did his squad and they lost a Seargeant and Corporal very quickly. My father decided that if he wanted to stay alive he had better learn quickly and was sent on a BD course at RAF Melksahm. On passing the course, he was promoted to Corporal.

He was then posted to Kenley and his first job, accompanied by six airmen, was to dig out German unexploded bombs. He had never been so scared in his life. ‘Like your first parachute jump, once you’ve done it, you can do it again.’

He worked at Kenley throughout the Battle of Britain and when the Germans shifted their attacks to the North East and were bombing the docks at North Sheilds, he was promoted to Sergeant and posted to Morpeth, near Newcastle.

After numerous other call-outs around England, he was acepted for a commission. On completion of the couse, he was sent to take over his new squad based under canvas at Chichester prior to ‘D’ day. They were due to go to France on ‘D + 5’ but on ‘D + 21’ he had to complete another course. The Seargent who took his place was killed on the beaches and he said he knew then that he was going to survive.

On completion of the course he was drafted to West Malling in Kent, known as ‘Doddlebug Alley’ because of the V1’s trajectory. There he trained American Servicemen on booby traps and learnt his lesson on familiary breeding contempt….

To simulate a booby trap, a detonator was wired up to the underside of a loose plank on a wooden bridge. When stepped on, the detonator exploded. Having wired this trap up numerous times, on a rainy day, he allowed the detonator wires ( that were attached to a battery ) to touch the damp board which caused an immediate circuit and ‘bang’. The thing blew up in his face.

Later he was sent oversas as adjutant to a BD Squadron with No. 2 Grp, Advanced HQ. He had various assignments, from demolishing bombs that were laying around, to checking houses for booby-traps, as they advanced.

One day, his CO came in and told him that there were reports of a forest fire and bombs exploding left, right and centre and told him to go and have a look.

Accompanied by his driver, they set out for the map reference and evetually arrived at Buren near Padaborn where he found the 20th anti-tank regiment guauding about 10,000 displaced persons. This was next to a German bomb dump that, so far, had not been reported to Allied Command.

It appeared that one of the displaced persons had got into the dump, which was built into a hillside, and warrened with crated H.E. bombs, high explosives, photo flares etc. Each tunnel was about a hundred yards in length by about 20 yards in width with approximately 30 yards between tunnels. The person who had infiltrated the dump in the hope of finding loot had yanked a piece of silk which was attached to a flare and set the whole tunnel ablaze!

My father checked the next tunnel and found it full of high explosive bombs and then decided that by demolishing the stack he migth be able to smother the fire. They wired up three bombs in the stack with detonators and, having only 400 yds. of demolition cable, they had to dig a trench to shield themselves from the blast. The army cleared all inhabitants from the surrounding dwellings and had all windows opened. Despite this precaution, the blast shattered windows for miles around! It also blew him off his feet!

By the time he regained his senses, the fire had been extinguished and a stream appeared, which eventually turned into a river … its origin remained a mystery.

By the time he was promoted to Flight Lieutenant and took up a post as liaison officer to the Belgian Government, his squad had demolished about 10,000 tons of bombs. This work was still continuing when he left to report to a Colonel Serverien at Louvain due to the fact that the Belgians were losing so many bomb disposal operatives. He returned to Brussels in order to submit his report to HQ but unfortunately that same evening the whole Belgian bomb dump exploded – 35 killed, numerous injured. Again he had been lucky!

53 years after the war, still being plagued by tiny fragments of metal catching on his razor as a result of the accident caused when teaching the Americans to defuse booby traps, my father lost an eye and finally died at the age of 84 from a rare type of skin cancer in his face. He was extremely brave to the very end.

Source:
WW2 People’s War is an online archive of wartime memories contributed by members of the public and gathered by the BBC.
https://www.bbc.co.uk/history/ww2peopleswar/stories/27/a4542527.shtml
Article ID: A4542527
Contributed on: 25 July 2005