James Metham of No.253 Squadron 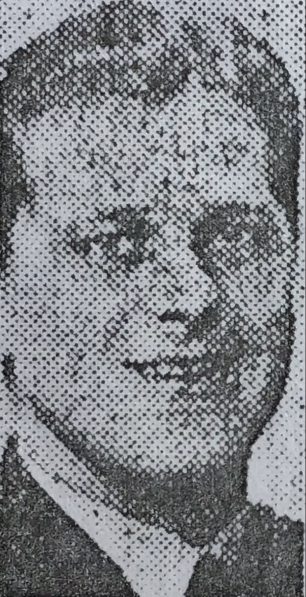 Sgt. James Metham served briefly at RAF Kenley with No.253 Squadron during the Battle of Britain, before being shot down and injured on 2nd September, 1940.

James, who seems to have been known as “Bill,” was born in 1914, the son of Richard and Clare Evelyn Metham. He was educated at the Palatine Central Boys’ School, Blackpool, and had two sisters: Peggy and Betty Winifred. In 1939, his Mother and sisters were living at Flat 14, 306 North Promenade, Blackpool. Clare was working as a Lingerie Sales Buyer, Peggy, as a Hotel Book-keeper, and Betty, as a typist/telephonist.

James joined the RAF in September, 1931, as an Aircraft Apprentice, aged 17, and passed out as a Metal Rigger in August 1934. He later applied for pilot training, which he completed successfully, before converting to Hurricanes at No.6 Operational Training Unit, Sutton Bridge.

Metham was posted to No.253 Squadron at RAF Kirton-In-Lindsay on 9th June, 1940, as a casualty replacement following the losses they had suffered during the Battle of France. In July, the unit was sent to RAF Turnhouse, to cover Edinburgh and the Forth Estuary, and then, in August, they moved to RAF Prestwick to defend Glasgow.

On 29th August, they were posted south to relieve No.615 Squadron at RAF Kenley and were immediately thrown into action the following day, losing three pilots in combat. The intense fighting continued on the subsequent days, with further losses. Metham flew his first Interception patrol from Kenley on the afternoon of 1st September, which appears to have been uneventful. However, it was a different story the following day, when he took off from Kenley at 7.25am, alongside eight of his comrades, detailed to patrol Hawkinge and Intercept an incoming raid. They climbed to 20,000ft and spotted a formation of 20/30 bombers, 10 miles south of Manston, accompanied by a fighter escort. 253 commenced a shallow dive towards the bombers, but were attacked by enemy fighters from above and behind, scattering their formation. At 8.15am Metham was shot down in combat with Messerschmitt Bf109’s over Thanet. He baled out but suffered burns; his Hurricane (P2946) is believed to have crashed at Warren Wood, Crundale.

Although the Operations Record Book states that Metham was “slightly injured,” he was in hospital for six months.

James Metham was commissioned on 29th October, 1941. He lost his life on 21st September, 1942 while serving as a Flying Instructor at No.59 Operational Training Unit when his Hurricane I (P3255) stalled in bad weather and spun into the ground in the circuit at RAF Cark, (Cumbria, formerly Lancashire).

His funeral was reported in “The Gazette and Herald,” a Blackpool newspaper, on 26th September, 1942:

Members of the Royal Air Force paid their last tributes to an esteemed comrade at the funeral of Flight-Lieut. Bill Metham, only son of Mrs. C. Metham of 306 North Promenade, Blackpool, who was killed whilst on active service. He was recently home on leave, and his promotion to Flight-Lieut. came through the day before he was killed. He was 28 years of age. He had an excellent record. During the Battle of Britain, he was shot down and spent six months in hospital. Flight-Lieut. Metham was a keen sportsman and had played both football and water polo for the Royal Air Force. He was also a member of the Caterpillar Club. He had many friends in Blackpool, one of whom was the late Flying Officer Walter Thornley, of Woodstock Gardens , South Shore, whose funeral Flight-Lieut. Metham attended at Holy Cross Church three weeks ago. The funeral service was conducted by the Rev. W. Yates, Vicar of St. Paul’s Church, North Shore, and R.A.F. Chaplain. The ceremony at Carleton was preceded by a service at St. Paul’s Church.

F/Lt. James Metham is remembered on Panel 3, of the war memorial at Blackpool (Carleton) Crematorium.

Many thanks to Colin Lee, for finding F/Lt. Metham’s funeral report and photo.
Sources:
The Battle of Britain, Then and Now by Winston Ramsey.
Men of the Battle of Britain by Kenneth G. Wynn.
https://www.cwgc.org/find-records/find-war-dead/casualty-details/4029216/JAMES%20METHAM/
http://www.bbm.org.uk/airmen/Metham.htm
http://www.oldhaltonians.co.uk/pages/rememb/ROH/24.htm