A Letter from "Dutch" 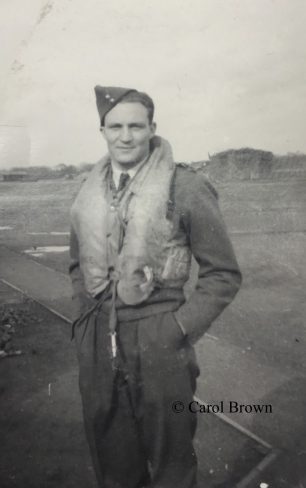 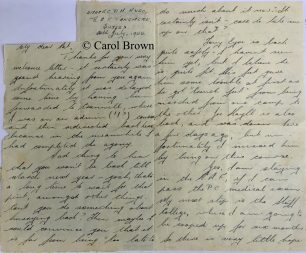 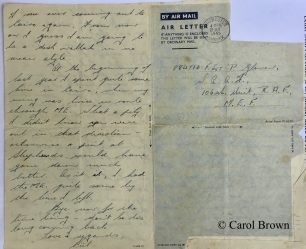 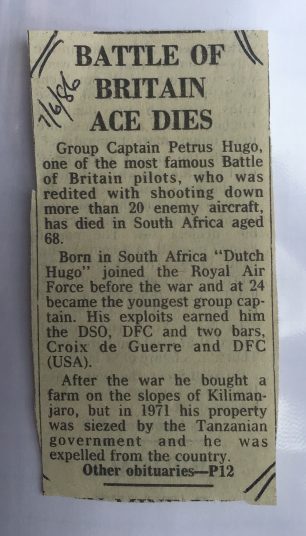 This letter dated 20th July 1945, was sent to Flight Sergeant “Pat” Glover by Petrus “Dutch” Hugo, who had risen up the ranks since the two had been stationed together at Kenley during the Battle of Britain. “Dutch” had served with No.615 Squadron, and mentions his Commanding Officer from those days, Joe Kayll and Anthony Eyre, both of whom had been taken Prisoner of War.

Thanks for your very welcome letter – it certainly was grand hearing from you again. Unfortunately it was delayed some time by having been forwarded to Cranwell, where I was on an admin (!!?) course and then redirected back here because in the meanwhile I had completed the agony.

Sad thing to hear that you won’t be back till March next year – gosh that’s a long time to wait for that pint, amongst other things. Can’t you do something about hurrying back? Then maybe I could convince you that it is far from “too late to do much about it now.” It certainly isn’t – care to take me up on that?

Tony Eyre is back quite safely – I haven’t seen him yet, but I believe he is quite fit. His feet gave him some trouble at first as he got “trench feet” from being marched from one camp to the other. Joe Kayll is also back, and was down here a few days ago but unfortunately I missed him by being on this course.

Yes, I am staying in the R.A.F., if I can pass the P.C. medical exam. My next stop is the Staff College where I am going to be cooped up for six months. So there is very little hope of me ever coming out to Cairo again. From now on I guess I am going to be a desk wallah in no mean style.

At the beginning of last year, I spent quite some time in Cairo, when my wing was twice en route through M.E. What a pity I didn’t know you were out in that direction otherwise a pint at Shepheard’s would have gone down much better. As it is, I had the M.E. quite some by the time I left.

Bye for the time being – don’t be too long coming back.

You can read F/Sgt. “Pat” Glover’s memories here and see her documents here.

PETRUS HENDRIK HUGO, known to “Pat” as “Piet,” and to No.615’s ground crews as “Dutch,” (because they had trouble understanding his accent), was born on a farm in Pampoenpoort, Cape Province, South Africa, on 20th December, 1917. He was the son of Pieter Francois Hugo and Susanna Catharina Hugo.

Piet studied Aeronautical Engineering at Witwaterstrand Technical College before quitting his studies and sailing to England in 1938 to join the RAF on a short service commission. He began his ab initio training as a pupil pilot at No.6 Elementary and Reserve Flying Training School, Sywell, in January 1939. By the Autumn, he had completed his flying training at Drem, where he was considered an “exceptional” pilot and went to the 11 Group Pool at St. Athan on 23rd October, before being posted to No.2 Ferry Pool at Filton in mid-November.

On 17th December, 1939, Hugo joined “B” Flight, No.615 Squadron at Vitry-en-Artois, in France. He was with them through the bitter winter and the Battle of France, in the Spring of 1940. During this period, the squadron converted from bi-plane Gloster Gladiators to the much more sophisticated Hawker Hurricane. “B” Flight were at Moorsele in Belgium for a few days from 17th May and Laurie Hale, of 615’s ground crew, remembered “Dutch” landing from a very early morning sortie looking white and shaken, saying, “I’ve just seen the whole f****** German Air Force!”

By this point, German Forces were advancing and the situation was rapidly descending into chaos. On 20th May, Hugo destroyed a He111 bomber, his first victory flying a Hurricane. The following day the squadron was withdrawn to Kenley, but non-flying personnel arrived back in dribs and drabs, making their way back to England as best they could.

On 23rd May, Piet was back to flying Gladiators as one of six pilots chosen to form “G” Flight attached to No.607 squadron at Manston for airfield defence, but on the 30th they returned to Kenley and “G” Flight was disbanded.

In the early stages of the Battle of Britain, “Dutch” claimed a string of victories: a Ju87 on 14th July, a Do.17 damaged on the 17th, probably 2 Messerschmitt 109’s on 20th and another on 25th. In addition he shared the claim for a He.59 floatplane on 27th with at least five other pilots of No.615 Squadron. Although the He.59 carried Red Cross markings, Churchill himself had ordered that they should be attacked as it was suspected that they were being used for observation work as well as picking up downed German airmen.

On 29th July, Hugo was sent to the Air Fighting Development Unit for a course and didn’t fly operationally until 12th August,  claiming another Messerschmitt 109. Around this time it was announced that Hugo had been awarded the DFC, (which he received on 23rd August). On 16th, Hugo made it back to Kenley after combat despite being hit by cannon shell splinters in the legs. His Hurricane had been severely damaged by a Me.110, but in return he had managed to damage a He.111.

On 18th August, “The Hardest Day” Hugo came off worse after a surprise attack by Me109’s which came out of the sun. He tried to bale out but was held in the cockpit of his Hurricane (R4221) by the strap of his harness which had become wound around a lever in his haste to get airborne. He made a crash landing near Orpington and was admitted to hospital with wounds to his left leg, left eye, right cheek and jaw, returning to the squadron on 22nd September.

During this time, Stan Ford, one of 615’s “B” flight ground crew, found himself “adopted” by Hugo’s dog, who used to come to him to be fed in the absence of his master. When Hugo was eventually posted away, Stan took the dog home to his family, where he lived a long and happy life.

In September 1941, “Dutch” was made a Flight Commander. He was awarded a Bar to his DFC and given command of No.41 Squadron at Merston, in November and continued to add to his string of victories.

In April 1942, Hugo married Angela Seeds, a nurse serving with the Voluntary Aid Detachment, at St. George’s Chapel in Hanover Square. His Fitter and Rigger attended the ceremony.

On 12th April, 1942, Hugo was made Wing Leader at Tangmere and damaged a FW190, but on the 27th, after damaging another FW190, he was shot down, baled out into the Channel and was very lucky to be rescued, wounded, by an Air Sea Rescue launch. He was awarded the DSO on 29th May, 1942.

Hugo was rested with a spell at HQ 11 Group, but returned to flying duties succeeding ‘Paddy’ Finucane as Wing Leader at Hornchurch, on 18th July – an appointment which only lasted a few weeks before he was sent to command 322 Wing in North Africa, where he added more victories to his score, being awarded a second Bar to his DFC on 16th February, 1943. In March, Hugo was posted to HQ North West African Coast Air Force, but returned to command 322 Wing again in June 1943.

322 Wing was disbanded in November 1944 and Hugo was posted to HQ Mediterranean Allied Air Forces. He was seconded as liaison officer to the Allied Military Mission with the 2nd Ukranian Army, under Marshal Tolbukhin at the end of 1944, before returning to the Central Fighter Establishment in Britain. Hugo served with HQ 11 group from 10 July, 1945, until his move to Staff College Bracknell as President Aircrew Reallocation Board on 7 August, 1945.

“Dutch” retired from the RAF on 19th February, 1950, as a Squadron Leader, retaining the rank of Group Captain, and returned to Africa.

The British Government gave him a farm on the slopes of Mount Kilimanjaro in Tanganyika (now Tanzania) where his main crop was wheat and he also ran 2000 head of cattle, as well as breeding Alsations.

However, tragedy struck in 1971, when Piet lost Angela to cancer and he was evicted from his farm by the police without being given leave to appeal or a reason for the eviction. He was only allowed to take eight small boxes of his belongings with him. The British government did nothing to assist Hugo, who had fought their cause so bravely. The deportation was probably a case of mistaken identity but the newly independent Tanzanian authorities weren’t prepared to lose face by admitting their mistake.

Hugo returned to South Africa and bought a sheep farm, ‘Canariesfontein,’ near Pampoensdrift, where he had been brought up. He died of a heart attack on 6th June, 1986, and was laid to rest in a simple ceremony in the graveyard of the family farm.

Sadly, “Piet” and “Pat” never did manage to get together for that pint.

Sources:
Letter and photos reproduced with the kind permission of Carol Brown.
Men of the Battle of Britain by Kenneth G. Wynn.
Battle of Britain London Monument
https://warriorsofthesky.co.za/group-captain-petrus-dutch-hugo/