In June 1917 an area of Coulsdon Common, part of which was in use as a golf course, was commandeered for use by the Royal Flying Corps (RFC) under the ‘Defence of the Realm Act’,  enabling soldiers of the Canadian Forestry Corps to clear the ground and make way for airfield construction.  Kenley aerodrome was born.

Seven double hangars were constructed and the airfield became known as the No.7 Aircraft Acceptance Park where aircraft manufacturers sent their planes by road and rail for assembly.  Sopwith Camel fighters (manufactured at Kingston-upon-Thames) and DH9a single-engined bombers were then tested and flown over to airfields in France and Belgium for duty with the Royal Flying Corps.  In 1918,  a larger hangar was built to accommodate the Handley Page 0/100 and 0/400 heavy bombers.

On 1 April 1918 the RFC became the Royal Air Force (RAF) and was no longer part of the Army.   Resident RAF squadrons with a variety of aircraft began to appear in 1918,  one being No.1 (Communications) Squadron which, after the Armistice of 11 November 1918, regularly conveyed officials to and from the Peace Conference taking place at Versailles in Paris.

After the war it was assumed the land would revert to its original use; for sure that was the wish of most locals.  However,  on 18th December 1919, Winston Churchill, who was then Under-Secretary of State to the Air Ministry, stated in response to a question tabled in Parliament that Kenley was too important to the defence of London to be given up.  The entry in the Parliamentary Record, Hansard, records:

Sir STUART COATS asked the Under-Secretary of State to the Air Ministry whether, in view of the danger to aviators landing at the Kenley Aerodrome on account of its exceptional altitude and liability to be enveloped in clouds and fog, as instanced by the recent fatal accident near Caterham, and also in view of the annoyance caused to the residents of the district by the noise of arriving and departing aeroplanes, he will consider the permanent abandonment of the site and the restoration of the common, so far as may be possible, to its original condition?

Mr. CHURCHILL. The situation of this aerodrome, on which a large amount of money has been spent, renders it of great importance in connection with the Air Defences of London, and it is considered desirable that it should, therefore, be retained as a permanent station by the Royal Air Force. The advantages and disadvantages of the prevailing atmospheric conditions at Kenley were fully considered at the time when this decision was taken. 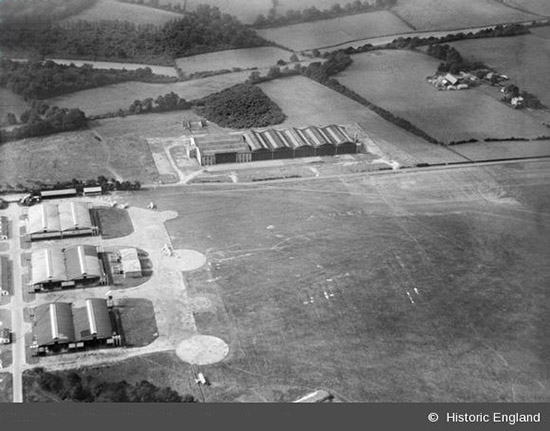 From 1922 Churchill lived at Chartwell just outside the nearby village of Westerham.  It was rumoured at the time that his attachment to Kenley was due to the fact that he was learning to fly here.

Throughout the 1920’s, further developments to the airfield took place and several fighter squadrons were rotated through and accommodated on the airfield, one of which was No.23 Squadron, arriving in early 1927 and staying until late 1931. It was equipped with Gloster Gamecocks and was joined in 1930 by a young pilot, Flying Officer Douglas Bader. The following year he was involved in a flying accident which resulted in the loss of his legs, the story of which was portrayed in the 1955 film Reach for the Sky.

The station closed in September 1931 for further reconstruction to turn Kenley into a station capable of accommodating two fighter squadrons at the same time. It reopened in May 1934 with the arrival of No.3 and No.17 Squadrons, both equipped with Bristol Bulldog fighters.

Of further local significance in this period was the formation of No.615 Squadron formed at RAF Kenley as part of the Auxiliary Air Force on 1 June 1937. Comprised of part-time volunteer pilots it was initially equipped with the Hawker Audax in the army-cooperation role. The Squadron was later to be adopted by the County of Surrey and today’s No.615 Volunteer Gliding Squadron, which flies from Kenley, nominated itself ‘615’ in its honour. 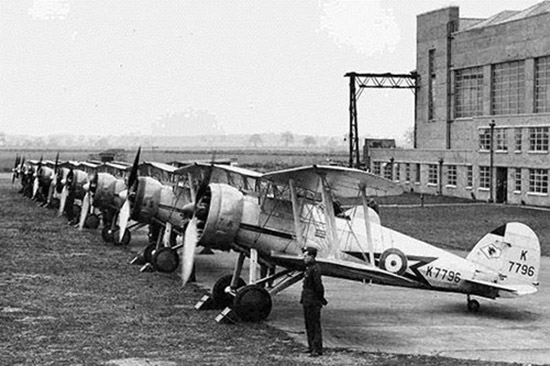 A line-up of Gloster Gauntlets of No. 46 Squadron in 1936, probably taken at RAF Digby.

Preparation for another war

As war approached, in August 1939 RAF Kenley was placed on a war footing at the same time as two concrete runways were being built to accommodate the new Spitfire fighters.  In addition, during late 1939 and early 1940, a perimeter track and blast pens were under construction, Hayes Lane was diverted, three pairs of the original 1917 hangars were demolished, as was the large 1918 Handley Page bomber hangar. The aerodrome was equipped with storage for 35,000 gallons of aviation fuel, 8,000 gallons of petrol, 2,500 gallons of oil storage and an armoury with space for 1.25 million rounds of small arms ammunition for use by the Hurricanes and Spitfires. Anticipating enemy air attacks, the airfield was defended by four army 40mm Bofors emplacements, two ageing 3-inch guns anti-aircraft guns and a number of Lewis guns.  A parachute & cable system, powered by rockets, was installed on the northern side of the airfield and was responsible for bringing down a German Dornier bomber on 18th August 1940.

It was a close-run thing.  But with runways and perimeter track completed and its new aircraft revetments built, Kenley was now prepared for the impending Battle of Britain.