RAF Kenley was re-activated at the end of January 1940 when Hurricanes of No 3 Squadron took up residence, even before the two new concrete runways, the perimeter taxiway and other facilities had been completed.

A flight of Blenheim fighter-bombers from No 604 Squadron arrived at the end of March but it was only on 16 May 1940 that the airfield was considered suitable for Spitfire operations with the arrival of No 64 Squadron – six days after the German invasion of Holland and Belgium on 10 May.

By June 1940 the British Expeditionary Force (BEF) and other Allied troops were on the retreat from the continent and fighter squadrons were returning to bases in England.  No 615 Squadron, equipped with Hawker Hurricanes, had a particularly tough time in Belgium, and along with the withdrawal from France of No 3 Squadron, Kenley’s Station Commander was faced with a huge logistical problem of where to accommodate these returning squadrons prior to their dispersal to other airfields.

Kenley squadrons played a great part in providing cover for the evacuation of Dunkirk. It soon became clear following the withdrawal that Britain faced the danger of being attacked itself.  As Churchill said in Parliament: “I expect that the Battle of Britain is about to begin.”

What General Weygand called the “Battle of France” is over. I expect that the battle of Britain is about to begin. Upon this battle depends the survival of Christian civilisation. Upon it depends our own British life and the long continuity of our institutions and our Empire. The whole fury and might of the enemy must very soon be turned on us.   ……….  Let us therefore brace ourselves to our duty and so bear ourselves that if the British Commonwealth and Empire lasts for a thousand years men will still say, “This was their finest hour.”                                         (Hansard, Winston Churchill, 18 June 1940)

The Battle of Britain

The Battle of Britain raged between 10 July and 31 October 1940 and Kenley’s pilots were very much in the firing line.

For a seaborne assault on the south coast of England, the German war machine needed complete mastery of the air which meant the RAF’s Fighter Command had to be taken on and beaten. So the Germans increasingly turned their attention to the airfields in the south-east, and particularly Kenley, whose importance had grown as it took on the role of a Sector HQ in 11 (Fighter) Group – Shoreham-by-Sea, Gatwick, Redhill and Croydon airfields were the earliest under its control. Kenley would not have too long to wait before it became a target for Luftwaffe bombers. On 18th August 1940, the airfield sustained major damage following a heavy bombing raid by the Luftwaffe.

18th August 1940.   A German Luftwaffe photograph shows the machine-gunning of one of RAF Kenley’s fighter blast pens located on the northern edge of the airfield: Hayes Lane can be seen in the background. (Stabler Heritage, RAF Museum, Hendon).  Amazingly, the photographer’s account of the raid can be read here. ***

***    Personal account of the raid on Kenley by Ralf von Pebal, a Luftwaffe photographer

The ‘early warning’ radar had picked up a lot of enemy activity across the Channel that sunny Sunday lunchtime. At around 12.45pm, the perceived threat resulted in No 64 and 615 Squadrons being scrambled, although the Germans’ targets were still unclear. At 1pm, some sixty Luftwaffe aircraft, comprising a high-level and a very low-level raiding force, crossed the Sussex coast at Cuckmere Haven near Beachy Head.  Air raid sirens sounded around Kenley and Caterham. Fifteen minutes later, the onslaught began from the south with nine Dornier Do17 bombers of the low-level raiding force flying across the aerodrome at about 100 feet, followed several moments later by a raid from the high-level bombers. 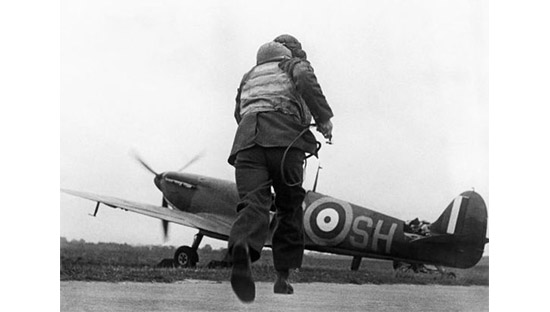 Damage to the airfield and its facilities is well documented: three of the hangers were well alight, the equipment stores were a write-off, as were four Hurricanes and a Bristol Blenheim bomber destroyed on the ground.  Damage was sustained to another four parked aircraft and the station’s medical facilities. Seriously, no communications now existed with the outside world.

Nine airmen were killed including the station’s much loved medical officer and local GP, Flight Lieutenant Robert Cromie; a further seven men and a WAAF were wounded.  One soldier died of his wounds the next day and two more suffered minor wounds.  Houses surrounding the airfield suffered major damage as airfield targets were missed: Valley Road in Kenley was particularly badly hit. A Hurricane of No 615 Squadron, badly damaged by bomb blast at RAF Kenley    (Unknown photographer)

Nevertheless, No 64 and No 615 Squadrons’ pilots did not allow the enemy to escape unpunished, claiming several enemy fighters and bombers as they headed for the safety of France. Of the nine low-level Do17s, only two made it back to their base north of Paris – four were shot down over England and two crash-landed in France.

While the German raiders appeared to have inflicted substantial material damage, the practical reality was somewhat different. The hangars destroyed were mainly surplus to requirements. The equipment stores were dispersed to the squadrons and the sick bay was relocated. Runway craters were filled in from mounds of rubble located around the airfield, and most importantly of all, the Operations Room remained intact. Kenley, despite the best efforts of the Luftwaffe, was ready for action within hours of the raid ending – except for one glaring problem. The raid had identified how vulnerable RAF Kenley was to having its communication system destroyed – and the same was true for other Fighter Command bases. Lacking contact with Bentley Priory in North London – the headquarters for Fighter Command – Kenley was effectively blind to what was going on across south-east England.

To rectify this, and ensure that there was never a re-occurrence, a new communications centre was established off the airfield in an empty butcher’s shop at 11 Godstone Road in nearby Caterham Village where it was assumed it would be safe from attack. The site is now the premises of a funeral director’s office, W. A. Truelove & Son Ltd.  On 1 November 1940 the communications centre moved again, about three-quarters of a mile west of the airfield to an old house called ‘The Grange’, still standing at the rear of St. John’s Church in Old Coulsdon, which offered more space and up-to-date equipment.

Squadrons operating from Kenley during the Battle claimed successes as an increasing number of Luftwaffe aircraft were now operating over the south-east. There were bad days as well as good – in one day No 616 (County of Yorkshire) Squadron lost seven Spitfires and No 615 Squadron lost four Hurricanes where three pilots were killed.  Yet Kenley’s pilots inflicted significant damage on the attacking bombers and fighters, many of them gaining “ace” status as a result. A Hawker Hurricane and members of No 253 (Hyderabad) Squadron RAF in 1940.   (Unknown photographer)

The gratitude of every home in our Island, in our Empire, and indeed throughout the world, except in the abodes of the guilty, goes out to the British airmen who, undaunted by odds, unwearied in their constant challenge and mortal danger, are turning the tide of world war by their prowess and by their devotion. Never in the field of human conflict was so much owed by so many to so few. All hearts go out to the fighter pilots, whose brilliant actions we see with our own eyes day after day, but we must never forget that all the time, night after night, month after month, our bomber squadrons travel far into Germany, find their targets in the darkness by the highest navigational skill, aim their attacks, often under the heaviest fire, often with serious loss, with deliberate, careful discrimination, and inflict shattering blows upon the whole of the technical and war-making structure of the Nazi power.                                            (Hansard, Winston Churchill, 20 August 1940)

By the end of the epic battle, on 31 October, there was no doubt that Kenley had played a highly significant role.  Across the six squadrons based on the airfield at various times during the course of the Battle, 33 young pilots flying out of Kenley had paid with their lives; many more suffered life-impairing injuries.  On the aerodrome, RAF ground crew and soldiers had been killed and wounded also.

In 1941 Kenley was on the offensive again, operating against enemy targets across the English Channel and escorting Bristol Blenheim bombers to their targets. An influx of Allied and Commonwealth airmen started that year with two Polish squadrons, a Czech, an Australian, and a New Zealand squadron being based at Kenley. After a Belgian Squadron arrived in 1942, six Canadian Squadrons, on rotation through to 1944, swiftly followed. Some of the leaders

RAF Kenley’s best known Commanding Officer (CO) was Group Captain Victor Beamish DSO & Bar, DFC, AFC, whose demeanour earned him the respect of everyone. As CO he also commanded the Sector, and despite being almost 40 – considered very old for a fighter pilot – still sometimes flew operationally, leading the Kenley Wing which comprised of three fighter squadrons. On 28 March 1942, he was leading the Wing and flying with No 485 (New Zealand) Squadron when they sighted a formation of  German Messerschmitt Bf109s and Focke Wulf Fw190s just south of Calais. He was shot down and killed in the ensuing engagement, his aircraft crashing into the English Channel.  He has no known grave and is commemorated on a panel at the Runnymede Memorial near Windsor. In 1943 Wing Commander Johnnie Johnson, who ended up with a CB, DSO & two Bars, DFC & Bar, one of the RAF’s best-known aces, was stationed at Kenley commanding No 144 (Canadian) Wing; during the course of the war he was credited with shooting down 34 enemy aircraft as well as seven shared victories, three shared probable, 10 damaged, three shared damaged and one destroyed on the ground. This score made him the highest scoring Western Allied fighter ace against the German Luftwaffe.

Other famous RAF pilots flew from Kenley. As a young flying officer posted to No 23 Squadron at Kenley, Douglas Bader’s Bristol Bulldog aircraft crashed on 14 December 1931 while on a visit to the Reading Aero Club; badly injured Bader survived the crash but lost both legs. He rejoined the RAF in November 1939 having regained full flying status and was shot down over France on 9 August 1941, becoming a prisoner of war (POW). Wing Commander Brendan ‘Paddy’ Finucane DSO, DFC & two Bars, who flew on No 452 Squadron from Kenley in 1941, was killed whilst leading the Hornchurch Wing on a ground attack operation against a German Army camp at Etaples on the Pas de Calais on 15 July 1941.  Aged 21, he was the RAF’s youngest wing commander.  He also has no known grave and is commemorated on a panel at the Runnymede Memorial.

The beginning of the end

As D-Day on 6 June 1944 approached,  the war was about to move further away from Kenley.  Command and control were restructured and No 421 Squadron left for RAF Tangmere in April 1944 leaving the airfield’s role diminished, while Sector Control was taken over by nearby RAF Biggin Hill.