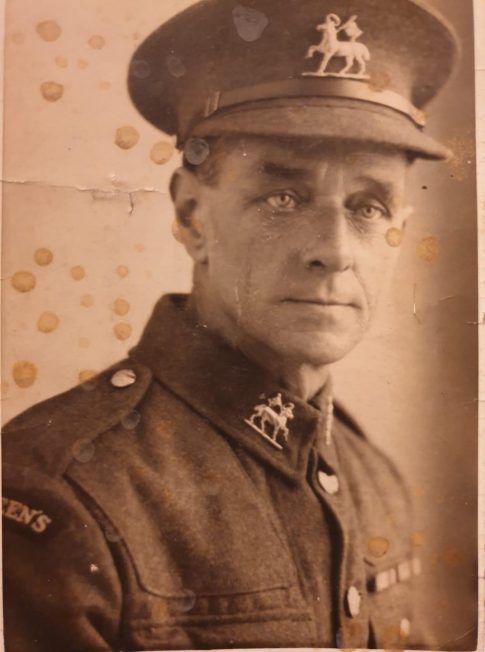 Kevin O’Brien has given us permission to share this wonderful photo of his Grandfather, George Francis O’Brien, who manned Anti-Aircraft guns at RAF Kenley during WW2.

George Francis O’Brien was born on 24th May, 1890, in Balham, South London. He was already in the Royal Navy when WW1 started. Little is known about his service except that he was treated for tonsillitis in May 1914 and his rank was given as “Officer’s Cook,” with H.M.S. Patrol, a Pathfinder-class scout cruiser.

On 2nd October, 1916, he transferred to the Huntingdonshire Cyclist Battalion, again his profession is noted as “cook” and his next of kin as living in Thornton Heath.

So George was already a Great War veteran by the time he donned a uniform again to serve at RAF Kenley. Judging by his cap badge, it appears that he was with the Queen’s West Surrey Regiment. We know that 12(HD) Battalion, Queen’s Royal Regiment had taken up general security duties and were manning defensive positions at Kenley from May 1940, so he may have been with them. Apparently he used to cycle to the airfield from his home in St.Saviour’s Rd, West Croydon – no surprise really after his service in the Cyclist Battalion!