You are here: Home>Keywords>Battle of Britain>'If the Invader Comes' Leaflet - June, 1940 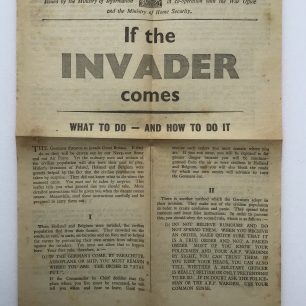 With fears of an invasion looming, this leaflet was issued by the Ministry of Information in co-operation with the War Office and the Ministry of Home Security, on 18th June, 1940. Over the next three days, fifteen million copies were distributed, supported by a publicity campaign.

It contains seven ‘rules’ about the way civilians should behave if faced with an invasion. However, some of the instructions are unclear or contradictory and further leaflets were distributed to clarify these points, notably “Stay Where You Are” in July, 1940, and “Beating the Invader” in May, 1941.

The original recipient of this copy was Mr. L. Ridley, of Upper Selsdon Rd, Sanderstead. It comes from the collection of Robin Grainger.