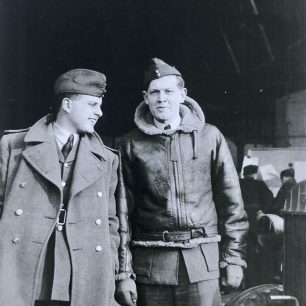 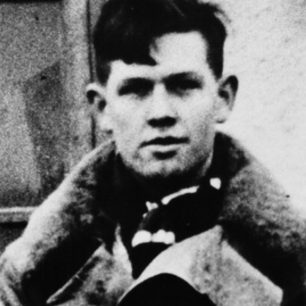 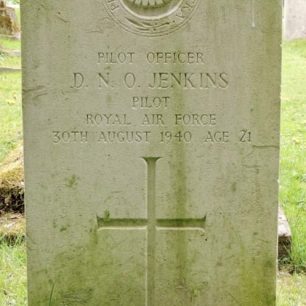 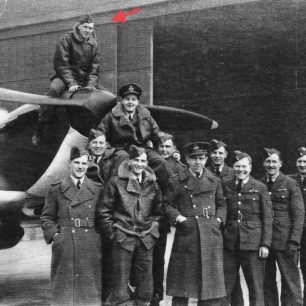 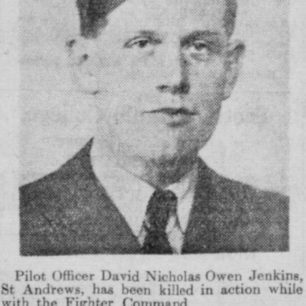 A newspaper report on the death of Pilot Officer Jenkins.
Dundee Courier and Advertiser, 2nd September, 1940

Pilot Officer Jenkins was born in May 1919 and was the son of the Rev.d Canon William Owen Jenkins, D.D. and Horatia Mary Jenkins, of St. Andrews, Fife. He spent four years at Marlborough College in the mid-1930’s.

David  joined the RAF on a short service commission, along with J. Kenneth G. Clifton, and began his initial training on 6th February 1939 at No.11 Elementary and Reserve Flying Training School, Perth. Following this, he joined No.2 Flying Training School at Brize Norton, and underwent training there between 1st May and 6th November 1939.

At this point No.253 was slated to be a Blenheim unit within Fighter Command. However, from mid-November the squadron was notified it was to be temporarily equipped with Fairey Battles. At the end of November, the squadron only had two Miles Magisters on strength. A further change of equipment came on 15 January 1940 when the squadron was notified it was to re-equip with Hurricanes. The squadron return for January shows one Hurricane, 15 Battles & 2 Magisters on strength. In February, the re-equipment with Hurricanes continued with the Battles gradually being transferred to No.22 Maintenance Unit at Silloth, however, 5 were retained for interception training.

On 14 February, the squadron made the move to Northolt for continued training which was hampered by the quality of the Radiotelephony sets and microphones they were using, a matter not resolved until the end of March. The squadron was declared operational as a day fighter unit on 3 April 1940, this was extended to cover night-fighting on 27 April.

No.253 began its first spell at RAF Kenley on 6 May, shortly before Germany launched its attack on Western Europe. On 16 May, the squadron sent some of its aircraft, with 9 pilots, to operate from Poix in France. Pilot Officer Jenkins together with Pilot Officer Clifton formed part of this contingent. Back at Kenley, the squadron formed a composite unit with part of No.111 squadron, sending their aircraft for daily patrols in France and returning each evening. It was during an afternoon interception patrol on the 18th May, that Jenkins shot down a Dornier Do.215 and claimed a Messerschmitt Me.110, diverting to Glisy to land.

The squadron flew extensively over France in the coming days covering the fighting and suffering several losses as a result. On 24 May, No.253 Squadron  was posted to Kirton-in-Lindsey.

At the end of June, the squadron still had 2 Fairey Battles on strength for interception training. The next two months saw the squadron rebuild and train – this continued to include night-fighting duties. There was another move, this time to RAF Turnhouse in July.  It was on such a night training flight in early August that Jenkins got into difficulties whilst on his return from Aldergrove to Turnhouse. He baled out and parachuted to safety, landing a half mile from his Hurricane a few miles from Prestwick.

On 29 August, No.253 was ordered to move to Kenley to relieve No.615 Squadron They flew all their aircraft and a limited number of groundcrew south by lunchtime.

The following day, on No.253 Squadron’s first operational patrol from Kenley, Jenkins took off with 13 other Hurricanes, initially tasked with patrolling over Maidstone to intercept an anticipated raid on Kenley or Croydon. As a result of the formation becoming separated, the squadron was ordered to return to patrol over Kenley, where they were joined by the remaining 5 squadron aircraft. The squadron was then directed to intercept an incoming raid near Redhill. During the ensuing fighting, the squadron claimed 3 Messerschmitt Me.110s and an Heinkel He.111 destroyed, a Me.110 damaged plus two Messerschmitt Me.109s and a Dornier Do.215 as probable. The fighting was intense with Pilot Officer Jenkins being killed, along with Pilot Officer Francis and Flight Lieutenant Brown injured. In addition Squadron Leader Starr returned to Kenley with a damaged aircraft. Jenkins baled out of his Hurricane at 11.45am, and is believed to have been killed by enemy fighters whilst descending in his parachute. However, the records of the 327th Searchlight Battery, based at Pendell Camp, Bletchingly, state:

Pilot Officer Jenkins was laid to rest in the churchyard of St. Margaret’s, Bagendon, Gloucestershire, in 2nd September, 1940. The funeral service was taken by The Rev’d Thomas Chadwick, rector of the church.

See the links below for more information.