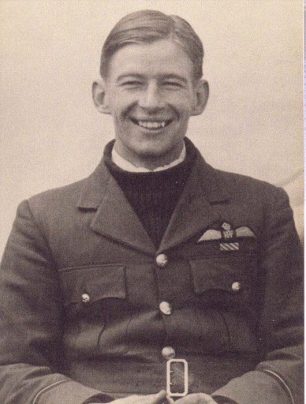 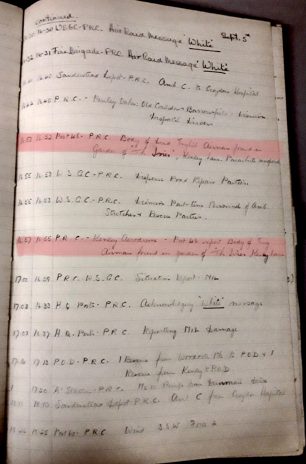 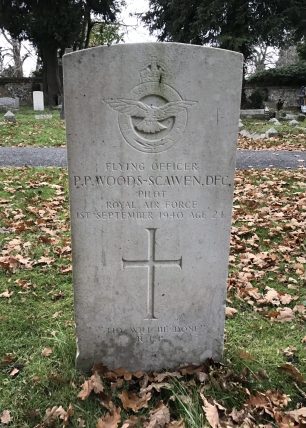 Sunday 1st September, 1940, saw 11 Hurricanes from 85 Squadron, based at RAF Croydon, sent out to intercept a raid approaching Tunbridge Wells and heading towards Kenley.

The Messerschmitts had the advantage of height and used it against 85 Squadron as they struggled to climb and intercept the bombers. Despite this, they claimed two Do.215s, one Do.17, a Me.109 and a Me.110 destroyed with a further Me.109 damaged.

However, of the eleven Hurricanes that had taken off, only six returned to Croydon that afternoon and two airmen were still unaccounted for:  Sergeant John Hugh Mortimer Ellis and Flying Officer Patrick Woods-Scawen DFC, who had been flying Hurricane P3150, coded VY-Z, his regular mount.

The whereabouts of Sgt. Ellis remained a mystery for many years but  at 14.08pm, Warden’s post No.45 (opposite ‘Ridgehurst’ in Uplands Road, Kenley),  saw an aeroplane crash in flames at Upland and Welcomes Rd.  By 14.23pm, the Fire Brigade were on the spot but the nationality of the burning aircraft hadn’t been established. At 14.27pm, an ambulance was sent to the scene and by 14.55pm the fire had been brought under control. The Hurricane was half-buried in Lime meadow at Welcomes Rd, Kenley, near the junction with Zig Zag Road. However, the cockpit was empty, and Patrick remained ‘missing’.

His family had been informed of the worrying news, but Patrick’s brother, Tony, also a fighter pilot, had no idea that his older brother had failed to return when he led yellow section of 43 Squadron into combat on 2nd September. Tragcially, his Hurricane (V7420) was hit during a dogfight with Me.109s over Romney Marsh, and he baled out at Fryland, near Ivychurch, so low that his parachute failed to save him. Tony was dead by the time a local parson reached him.

When the  Woods-Scawen family gathered near Folkestone for Tony’s funeral on 5th September, there was still a glimmer of hope that Patrick was alive. However, that afternoon at 16.53pm, the A.R.P post at Shord Hill reported that the body of a dead English airman had been found in the garden of “The Ivies”, Kenley Lane – a large house which was unoccupied at the time, just to the north of RAF Kenley, and only 500 yards from the wreckage of Patrick’s Hurricane. The circumstances of the airman’s death were unclear, but his parachute was unopened. The body was certainly identified by the following day, which is when the 85 Squadron Operations Record Book states that Patrick was found.

Flying Officer Patrick Philip Woods-Scawen DFC, was laid to rest in Caterham and Warlingham Burial Ground, to the rear of St.Mary’s church, Sec. A. Grave 180.He was 24 years old when he died.

There is a wonderful article by Dave O’Malley about the Woods-Scawen brothers on the Vintage Wings of Canada website,  here.

Rest in peace brothers-in-arms and thank you for your service.

The Woods-Scawens weren’t the only brothers to be killed serving with Fighter Command during the Battle of Britain. On 28th August, 1940, Pilot Officer Donald Kennedy McDonald, of 603 Squadron AuxAF, lost his life during his first operational sortie. Exactly one month later, on 28th September,  his brother, F/Lt. Harold Kennedy McDonald, was killed in action flying with the same squadron.
Sources:
Many thanks to Colin Lee.
Thanks also to LindsayOuld at Croydon Local Studies Archive and Edward McManus at Battle of Britain London Monument.
The Most Dangerous Enemy by Stephen Bungay
Battle of Britain Then and Now by Winston Ramsey.
Men of the Battle of Britain by Kenneth Wynn
https://www.cwgc.org/find-records/find-war-dead/casualty-details/2434165/woods-scawen,-patrick-philip/
https://www.cwgc.org/find-records/find-war-dead/casualty-details/2361233/
http://www.bbm.org.uk/airmen/Woods-ScawenPP.htm
http://www.bbm.org.uk/airmen/Woods-ScawenCA.htm