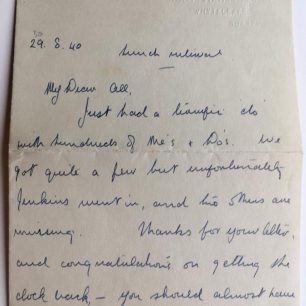 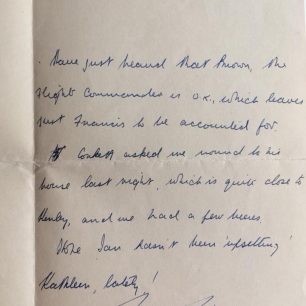 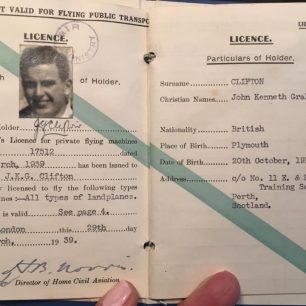 This letter, dated 29th August 1940, was written by Pilot Officer J. Kenneth G. Clifton to his family, only a few days before he was killed in action flying from Kenley with No.253 squadron. It appears to refer to sorties on 30th August, 1940.

Among the pilots mentioned in the letter is Pilot Officer David Nicholas Owen Jenkins, who had trained alongside Clifton and joined No.253 squadron at the same time. Jenkins and Pilot Officer Colin Dunstone Francis lost their lives on 30th August, 1940, and are remembered on our online memorial, together with Pilot Officer Clifton (see links below).

Flight Lieutenant George Alfred Brown managed to make a forced landing in Hurricane P3802, on 30th August. He was admitted to Preston Hall Hospital with a shoulder wound and shell splinters in his legs. Brown survived the war, as did Pilot Officer Allan Corkett, also mentioned. Allan was living in Brighton Rd at this time, which must have been where they shared “a few beers.”

My Dear All, Just had a terrific ‘do’ with hundreds of Me’s +Do’s. We got quite a few but unfortunately Jenkins went in and two others are missing. Thanks for your letter and congratulations on getting the clock back – you should almost have enough clocks for every room now! Have just heard that Brown, the Flight Commander is ok, which leaves just Francis to be accounted for. Corkett asked me round to his house last night, which is quite close to Kenley, and we had a few beers. I hope Jan hasn’t been upsetting Kathleen lately! Love, K

We are indebted to Daphne Clifton for allowing us to share Kenneth’s personal documents.