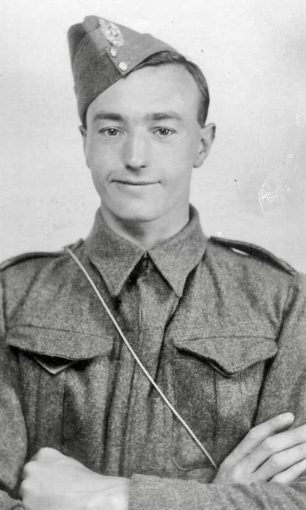 Sapper Ernest Arthur Wheeldon early on in his time with The Royal Engineers.
Martyn J. Wheeldon 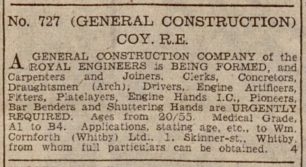 An advert typical of those placed in newspapers up and down the country, recruiting tradesmen for the Royal Engineers General Construction Company being formed in their local area.
Daily Gazette for Middlesbrough, 3rd June 1940 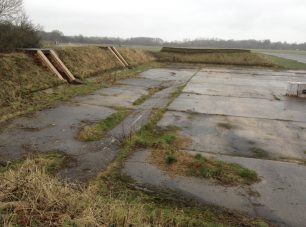 It is highly likely that 703 General Construction Company's work at Kenley incuded completing the construction of the airfield's 12 'E' pens, vital to protect aircraft when dispersed around the perimeter of the airfield.
Linda Duffield, 2018. 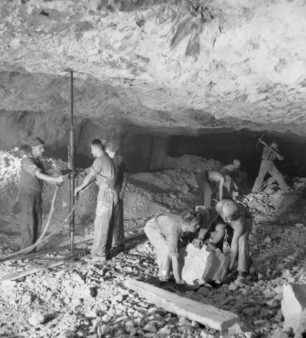 Royal Engineers tunnelling using a water pressure drill to clear solid rock while creating the maze of tunnels running through the Rock of Gibraltar.
©️IWM GM63 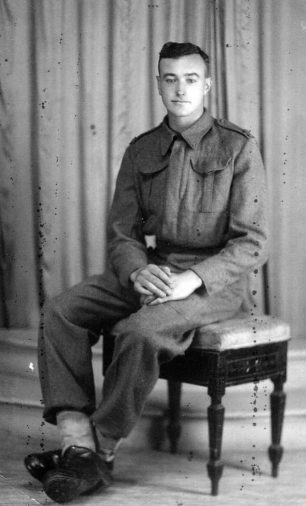 Arthur while stationed on Gibraltar in 1941.
Martyn J. Wheeldon 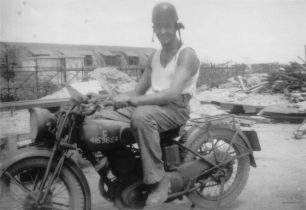 Arthur Wheeldon during his time as a Despatch rider.
Martyn J. Wheeldon 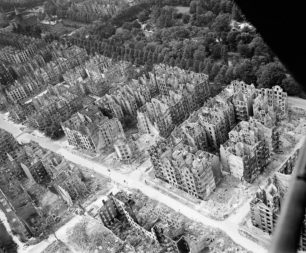 Arthur's war service concluded with the difficult and dangerous task of bomb disposal in Hamburg, Germany. This photo shows the devastated district of Eilbek.
©️IWM CL 3400 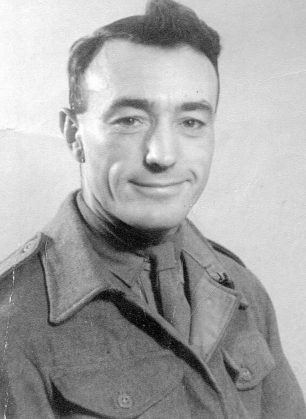 The war took it's toll on Arthur, as can be seen in this photo taken only a few short years later at the end of hostilities.
Martyn J. Wheeldon 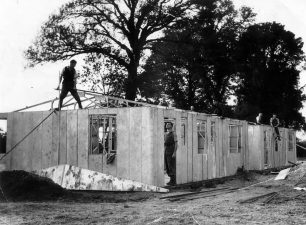 After he was demobbed, Arthur (seen here in the doorway) was engaged in the construction of prefab houses.
Martyn J. Wheeldon 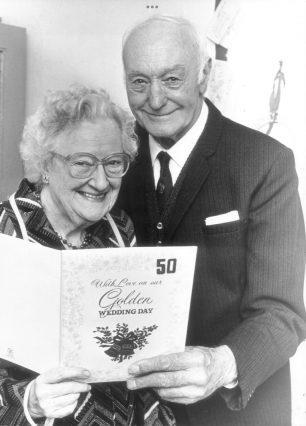 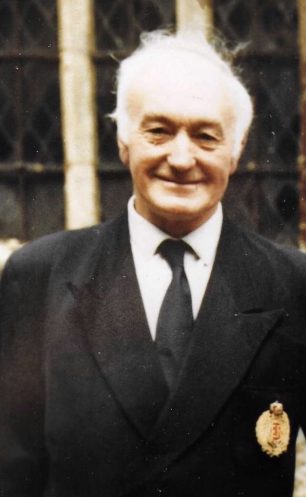 We are indebted to Martyn J. Wheeldon, for sharing his memories of his Father, 1989603 Sapper Ernest Arthur Wheeldon, who was known as ‘Arthur’ or by his nickname ‘Larry’ (as in ‘Larry the Lamb’ the character from the Childrens’ Hour ‘Toytown’ radio broadcasts).


Arthur rarely spoke about the war years, but we know that he was already a journeyman carpenter before he enlisted in the Royal Engineers, with 703 General Construction Company.

When Arthur received his call-up papers, he went to Northampton for his medical and trade assessments before being sent to Catterick Army Barracks for basic training, where he remembered the Regimental Sergeant Major shouting at him for walking across the ‘hallowed ground’ of the parade square. Despite being a considerable distance away, Arthur could clearly hear every ‘ uncomplimentary’ word! As part of his training he had to take a driving test. The Sergeant Instructor asked him what vehicles he had driven in the past, to which Arthur answered, “cars, motorbikes and tractors.” His test consisted of driving a jeep once around the barrack square whereupon he was given a ‘chit’ which allowed him to drive ANYTHING!

Most of the General Construction Companies were formed between January and April 1940 – a great deal of manpower was needed to construct fortifications, roads and buildings during the early months of the war, especially to support the British Expeditionary Force in France. Other units were also raised, including Road Construction and Artisan Works Companies.

To assist in recruitment, The Royal Engineers advertised in local newspapers for tradesman between the ages of 20 and 55 – blacksmiths, bricklayers, carpenters, joiners, masons, plumbers, painters, decorators, tinsmiths, concreters as well as drivers of concreting machinery. All of them had to pass a test in their particular trade.

Each company consisted of six officers and about 250 men, divided into four works sections. The bulk of the men were concreters (64) and pioneers (118). There were also 26 non-tradesmen, all drivers, with six of those acting as batmen to the officers.

64 Squadron with their Spitfires, had arrived at Kenley on 16th May followed by 615 with their remaining Hurricanes and personnel straggling back from France from 20th May. With the Continent in disarray, it seemed ever more likely that Hitler’s attention would turn to Britain, and the essential construction work to prepare Kenley for the trials ahead was still incomplete – work had been hampered by heavy snow and ice over the previous winter.

Concrete runways had been completed by the end of March 1940, but the bad weather delayed the completion of the taxi ways and dispersals until 10th April. However, although the dispersals were finished, authority to complete the blast pens essential to protect dispersed aircraft wasn’t even received until April – at the end of the month the station diary states that Kenley was “not fit for Spitfires except in runways”. It was estimated that “E” pens 1-4, (on the eastern side of the aerodrome) would be completed by 6th May, but there was still a great deal of work to be done to prepare Kenley for the trials ahead.

The arrival of the Royal Engineers must have been welcomed but there  is no further mention of 703 General Construction Company in Kenley’s Station diary, so we don’t know exactly what work they undertook, or when they left. Sadly, we have been unable to track down any other records for their movements either. However, we do know that three of their men were among more than 20 casualties inflicted at RAF Detling when it was attacked by Junkers Ju87 dive bombers on 13th August, 1940. In addition, another of their Sappers was killed when an air raid shelter at Biggin Hill was hit on 30th August, killing 39.  So it seems likely that 703 (or sections from the Company), moved from Kenley to Detling and then on to Biggin Hill. Arthur Wheeldon had vivid memories of digging casualties out of a shelter, which may have originated from one of these devastating raids.

In 1941, Arthur was posted to Gibraltar, where the Royal Engineers and Canadian Army were engaged in the excavation of a huge network of tunnels to support the expanded garrison based on ‘The Rock’.

Eventually, an amazing 34 miles of tunnels provided storage for food, supplies and ammunition as well as siege accommodation, creating a huge ‘fortress within a fortress’. The excavated debris was used to extend the Island’s runway out into Gibraltar Bay, allowing larger aircraft to operate from there, a vital factor during the invasion of North Africa in November, 1942. However, the tunnellers of the Royal Engineers had to contend with dirt and dust, often enduring long periods underground. Opportunities to wash off the grime were few and far between as the water supply was heavily restricted. Nevertheless, it was in this difficult environment that Arthur learned the art of demolition, blowing rocks to enlarge the tunnel system.

Arthur was given a month’s leave in the run-up to the Allied invasion of Nazi-occupied France, on 6th June, 1944, and then followed in the wake of the retreating enemy forces, clearing mines and deadly booby-traps. His motor-cycling skills were put to good use during a period as a despatch rider, but he was back in the front line during the ‘Big Push’ to Germany, building Bailey Bridges, often under enemy fire. In Germany, Arthur’s work switched back to clearing mines and booby-traps, finally concluding in Hamburg, mainly disposing of unexploded bombs dropped by the Allies. This work continued after the war ended, and Arthur wasn’t demobbed until late in 1946.

His service was recognised with a Mention in Despatches, gazetted 9th April, 1946.

The King has been graciously pleased to approve that the following be mentioned in recognition of gallant and distinguished services in North-West Europe.

When Arthur was demobbed in 1946 he initially went back into the building trade erecting prefabs. He had married in 1939, and his wife, Marie, gave birth to their son, Martyn, in 1950. During the early part of the 1950’s, he was approached by a representative of four brothers who owned a local 2,000 acre turkey and arable farm. Initially Arthur worked for them part-time, in the evenings, constructing nesting boxes.  However, the business was expanding and they needed someone who could build and restore the turkey sheds, look after the main residence (a manor house) and all the ancillary buildings, as well as constructing and maintaining the nesting boxes. Arthur was hired in about 1955 due to the quality of his work and remained at that post until well into the 1980’s, at which point he was stricken with emphysema and had to retire.

Arthur and Marie celebrated their fiftieth wedding anniversary on Christmas day, 1989. Although he was proud of his service in the Royal Engineers, he would never wear his medals, maintaining that the difficult and dangerous work he had done during the war years was, “just a job.”

Many thanks to Tony Adams for finding relevant information from Kenley’s Station Diary.