Would You ADDL and Eve It? 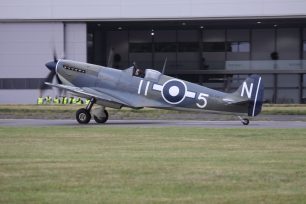 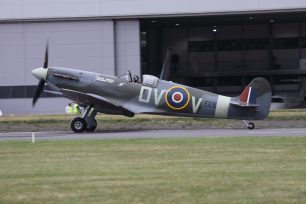 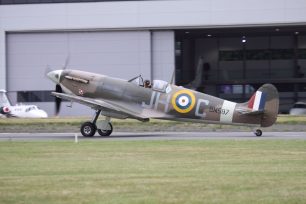 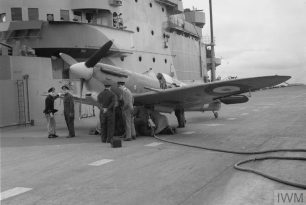 Why would RAF Kenley become involved with carrier-deck landings?
Answer: By 1942 the Admiralty were concerned over the ability of the Fleet Air Arm (FAA) to cover amphibious landings beyond the range of land-based fighters with the quantity of high-performance fighters available.

The Admiralty had been interested in a navalised version of the Spitfire back in early 1938 but opposition, including Winston Churchill, and prioritisation in supplying Spitfires for the RAF meant this did not bear fruit. With the Fleet Air Arm returning to Admiralty control on 24 May 1939, steps were taken to modernise the Fleet fighter force with the placing of an order for Grumman F4F fighters, initially known as the Martlet in British service; subsequently even taking on a French order after that country fell in June 1940, The French versions differed as they did not have folding wings.

Following the conclusion of the Battle of Britain, attention turned once again to supplying a naval Spitfire to the Fleet Air Arm. This resulted in Spitfires being diverted to the Fleet Air Arm for conversion in the second half of 1941, they were principally Mark Vs but also included several Mark Is, “navalisation” principally consisted of strengthening the fuselage, the addition of an ”A” frame arrestor hook, a tropical filter and a 30 gallon auxiliary/slipper fuel tank. The first Seafire IB, as it was designated, flew on 23 March 1942, was very much an interim type and it only fully equipped two Fleet Air Arm Squadrons. In parallel with this effort, steps were taken to produce a true naval Spitfire, culminating with the first delivery of a Seafire IIC on 2 June 1942. Improvements over the Seafire IC were; a strengthened undercarriage, four-bladed propeller and an up-rated Merlin engine, however, it still lacked folding wings. Five squadrons of Seafire IICs subsequently supported Operation Torch in November 1942.

As it became clear the Torch landings had been a success, attention moved on to planning the next steps beyond North Africa. Landings in the Eastern and Western Mediterranean were examined with Operation Brimstone, a combined amphibious landing on Sardinia coming to prominence at the end of November 1942. It was at this stage that the Admiralty raised the requirement for additional fighters to operate from its carriers beyond the range of land-based fighters. At a Chiefs of Staff Committee meeting on 9 December 1942, they set about examining the requirements of ship-borne aircraft for Brimstone and the provision of fighter support on combined operations. The following decisions were made; arrangements to be made for two selected Spitfire Squadrons to be given preliminary training in deck landing; the Admiralty were to determine likely carrier-borne fighter requirements for combined operations in 1943; to estimate how many RAF aircraft would be needed to supplement the FAA; and consequently the additional equipment requirements. By 16 December 1942, the RAF considered it possible to train one or two squadrons within a fortnight and the Admiralty had stated their requirement as 140 aircraft, to be delivered by 1 March 1943. On 22 December, 65 Squadron at RAF Drem, commanded by former 615 Squadron pilot Squadron Leader Rene Mouchotte, were given orders they had been selected for training in Seafire operation from carriers with a target date for completion of 5 January 1943. Their Dummy Deck Landing training began the next day on a:

“specially marked out portion of the aerodrome.”

By 29 December 1942, the training at Drem was complete and an initial party of pilots arrived at Arbroath for arrestor wire training, with additional pilots arriving on 31 December. Three days later the group moved to Machrihanish to embark on the training carrier HMS Argus, where each of the pilots carried out six deck landings. With their training complete, the party returned to Drem on 10 January. Following the resumption of deck landing training after Exercise Spartan in March 1943, the RAF identified a training programme between March and June for nine squadrons, with seven of these being Dominion.

RAF Kenley entered the picture on 30 March 1943 when Sub-Lieutenant Wilson, FAA, was attached to 411 (Canadian) Squadron to instruct in deck landings. He was followed in April by Eric ”Winkle” Brown who joined the Canadians “to teach them how to land their Spitfires on a deck.” Unsurprisingly, the Canadians were initially “lukewarm” to the training as no explanation was given as to why they were undertaking it and “Winkle” Brown had not been briefed either.  Eventually an arrangement was made where:

“for every deck-landing session I had to do a fighter sweep with them.”

Fitting the training in between their day job, 411 Squadron managed nine deck-landing sessions between 9 and 24 April providing “Winkle” Brown with plenty of opportunity to experience the excitement of fighter sweeps. By all accounts, Brown gained more from the sweeps than the Canadians did from the training. Nevertheless, a party of ten pilots and three Non-Commissioned Officer ground-crew from 411 Squadron were sent on a deck landing course at Machrihanish on 30 April.

In May 1943, it was the turn of 416 (Canadian) Squadron, when their training commenced from RCAF Dunsfold, initially still flying their Spitfire Mark IXs. On 17 May however, they took over the Mark Vs of 421 (Canadian) as these were more representative of the Seafire IIs the FAA operated. The training at Dunsfold continued until 22 May after which a “Party of 6 Officers and 6 NCO pilots and 3 technical NCOs under charge of F/Lt A Coles departed for RN Air Station Machrihanish, Scotland this morning.” The Canadians of 416 Squadron had already become somewhat disillusioned, as their squadron diary recorded earlier in the month:

“Throughout the afternoon pilots carried on with deck landings while squadron personnel wonder “Where do we go from here.””

The task of deck-landing training returned to 411 (Canadian) Squadron on mid-June when Lieutenant Hobbs of the FAA arrived; he gave lectures to the pilots in the dispersal huts then 12 pilots undertook deck-landing training at Dunsfold. The Squadron diary noted “On completion of ADDLs pilots are to proceed to Ayr on 24th June for phases 2 and 3. Additional personnel consisting of 2 ground crews are to accompany the squadron.” They were still training at Dunsfold on 25 June however, although this may have been more in connection with the testing of the impregnated hessian temporary runway that had been laid there.

Even by mid-June Vice-Chief of the Air Staff Douglas Evill had noted that 59 Spitfire pilots (including a Squadron Leader and four Flight Commanders) had been “satisfactorily” trained in deck-landing, against the Admiralty target of 100. On 1 July, Evill highlighted, to Vice-Admrial Sir Neville Syfret, that the 100 pilot target had been attained with the addition of 14 RAF pilots and the disbandment of the Merchant Ship Fighter Unit. There is a sense of relief in his memo, coming as it did shortly before the invasion of Sicily was launched on 10 July. In the same memo, Evill proposes the suspension of deck-landing training. In reply, Vice-Admiral Syfret agreed to the abandonment of the training but highlighted preparations in-train at the Admiralty for another amphibious operation “about the end of 1944” that they estimate would require 200 RAF fighters (plus pilots). He went on to request the RAF prepare plans for “an appropriate number of squadrons” and provision of a “requisite number of suitable aircraft.”

Conversations on the subject of deck-landing training continued to the end of October 1943 but no activity was authorised other than the plan to produce 200 RAF fighter pilots for use on aircraft carriers and an examination of the types of Spitfire that may be in use in the future when the requirement materialised. Fortunately for the Canadians, not just those at Kenley, the need to operate from an aircraft carrier never arose as events overtook the scheme and the war ended before any large scale amphibious operation by British and Commonwealth forces was put into effect. The Canadian experience was just another case of what might have been.

As a postscript in 1945, due to the shortage of Fleet Air Arm pilots, twenty-four RAAF Spitfire pilots joined the Royal Australian Navy Volunteer Reserve (A) to train as naval fighter pilots. The Australians were all veteran Spitfire pilots, with around 2,000 flying hours, and some were former squadron commanders. At the time new replacement Seafire pilots arrived with around 150 flying hours and their calibre was regarded as low. Their conversion training took five weeks at Schofields in Australia with their carrier qualification being achieved on HMS Indomitable. To their disappointment the war ended before they could see operational service, but did join HMS Indefatigable and HMS Implacable immediately after.