You are here: Home>History>Serving at RAF Kenley>Memories of Kenley Airfield in 1941 by Polish officer, Jan Jokiel

Memories of Kenley Airfield in 1941 by Polish officer, Jan Jokiel 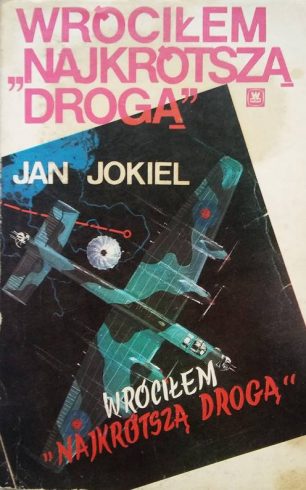 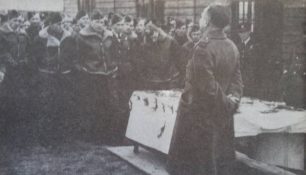 Piotr Łaguna gives good wishes to his colleagues on Easter 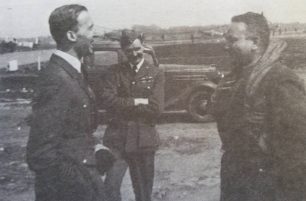 Jan Jokiel was a Polish Intelligence Officer participating in the Battle of Britain. He was known for his passion for photography and after the war he published 2 books with the photos of Polish pilots in Britain and with his memories of those times.

In April 1941 No. 302 Polish Fighter Squadron, which Jokiel was part of at that time, received an order to move to Kenley airfield as their next station. Jokiel remembers his first impression of Kenley in the following way:

“Kenley, in spite of being heavily damaged during the Battle of Britain, still had solid buildings and very nice surrounding. The airfield itself however, was built in the 30’s and it was small and situated on a hill which had the shape of a reversed pan.”

At that time, wing commander John Peel served as the commandant of Kenley airfield. He was well-known to the pilots of No. 302 Polish Fighter Squadron as they already had opportunity to interact with him socially and in the battle. Jan Jokiel was sent to Kenley before his colleagues’ arrival on a mission to learn about the airfield as much as he could, also to share the ambitious plans with Kenley’s commandant – this was the Polish Squadron’s decision to impress the English pilots already stationed at the airfield and arrive in formation of 9 aircraft, three at the same time. He notes the reaction of John Peel to this revelation:

“At my statement John Peel emphasized that the Kenley airfield is narrow, with short roll-out that ended and a sudden drop area, but he knew the fine piloting skills and great ambitions of my colleagues, so he was convinced that all would look spectacular. At the end of a nice conversation he added that he would do everything to make our squadron feel as good as possible at their new base, because he was aware of the pleasures that they experienced during the long winter months in Tangmere.”

In the end the whole squadron landed flawlessly gaining trust and admiration of the rest of the crew.

No. 302 Polish Fighter Squadron transferred to Kenley in April, just in time for the celebration of Easter. For Polish pilots Easter was fundamental and the most important festival and they had already prepared for it at their previous station, Tangmere, where they kept a pig which was to be used to make hams and sausages. Unfortunately, they couldn’t bring the pig with them when the order for transfer arrived so they needed to acquire their food through other channels – with the help of the warrant officer Zamiara and the adjutant Funio, who knew many vendors of the greatly stocked kitchen in the “Rubens” hotel. Finally, they ended up with plenty of goodies – beautiful hams and sausages, and painted eggs – which they also shared with Englishmen interested in Polish food.

“The mood in the squadron clearly improved at the new airfield. People felt better and immediately their good mood returned. Well, they finally left Tangmere, which was already a cause for joy. Besides the weather was beautiful and sunny, and the hosts welcomed them with warmth. Quiet pace without the surprise attacks from the sky at night allowed me to be reminiscent of the time passed in a more insightful fashion, and try to recap all the things we’d experienced since August 1940.”