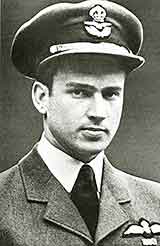 On 27th July, 1943, George Clinton Keefer, who had been in command of 412 squadron RCAF for about 6 weeks, was leading them on a late afternoon sweep 15 miles over France, when the engine of his Spitfire, packed up.


He managed to make it over the French coast and was roughly four miles north-west of Cayeux, at 1000ft, when he baled out. Having landed safely in the water and inflated his dinghy, Keefer began to paddle for the English coast, but it was already 6pm and although the alarm had been raised, poor weather conditions hampered efforts to rescue him. Keefer paddled for six hours until he was finally picked up by a Supermarine Walrus of the Air-Sea Rescue Service at 11.45pm.

The effort to locate Keefer appears in 403 squadron’s Operations Record Book entry for Tuesday 27th July, 1943. Ramrod 164 was their second sortie that day.

The role of our Wing on Ramrod 164 was forward target support and W/C Johnson led the Wing reaching Tricqueville on schedule at 29,000 feet. From here, the Wing swept to Harfleur and Londinieres at 25,000 feet and then crossed out at EU. They lost height off the coast, going to sea-level to Le Touquet where they orbitted in search of S/L Keefer who was in a dinghy thereabouts. Two small and empty dinghies were seen 10? West of Le Touquet, and nearby were two fishing vessels. The Wing crossed in at Hastings at 2,000 feet.

WING COMMANDER GEORGE CLINTON KEEFER, DSO and Bar, DFC and Bar, Netherlands Flying Cross, French Croix de Guerre with Gold Star.
Born in New York of a Canadian mother and an American father, George Clinton Keefer spent part of his childhood in Charlettown, Prince Edward Island, Canada. After receiving a scholarship to study Mechanical Engineering at Yale University, he enlisted in the RCAF in October 1940, receiving his “wings” in April 1941. He had soloed after only four hours instruction and graduated at the head of his class.

Keefer was quickly posted overseas to an Operational Training Unit and then to RAF Squadron No 274 flying Hurricanes in the Middle East. He returned to Europe in May of 1943 and flew Spitfires with the RCAF’s 416 and 412 Squadrons.

During the course of the war, Keefer rose to the rank of Wing Commander, and flew three tours of operation accounting for 12 enemy aircraft destroyed, 2 probables, 5 destroyed on the ground, with 9 others damaged and over 60 enemy vehicles and ground installations destroyed. ‘Johnnie’ Johnson spoke very highly of Keefer in his autobiography, “Wing Leader.”

By the time he retired from the RCAF in 1947, George Keefer had flown more Ops (468) than any other Canadian pilot except Stan Turner (500). He joined the management team of Canadair, eventually rising to become their Vice-President. In 1968, he bought ‘Plastal’ (today Avior) an aerospace composites manufacturing company based in Granby, Quebec, which he ran very successfully until his death in 1985, in Montreal.

Rest in peace, George, and thank you for your service.