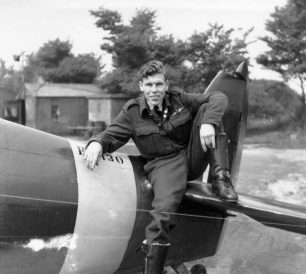 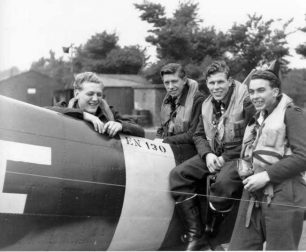 P/O James Abbotts sitting third from right. I think the two pilots sitting to his left are George Rawson Brown and George Uttley, both killed in May 1943, so this photo was probably taken between February and early May, 1943.
The Abbotts family, Dean Black, Pierre Lagace. 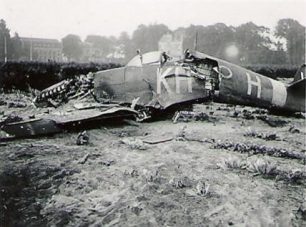 Abbott's Spitfire KH-H, in the bulb fields of Hilegom. The photo was taken by a German soldier who was tasked with guarding the wrecked aircraft.
R. L. (Grandson of the guard who took the photo), Pierre Lagace.

While relating the stories of fighter combat during WW2, we often talk of ‘miraculous escapes,’ but what happened to P/O James Elmer Abbotts, of 403 squadron, RCAF, on the 29th July, 1943, was really something akin to a miracle….

The first job of the day for Kenley’s Canadian Wing was Ramrod 22, escorting Marauder bombers. The wing went to Coltishall for this operation. P/O J.E. Abbotts and F/L Goldberg were flying as White 3 and 4 with 421 Squadron (who were short of pilots) and so they went in to attack with other sections of 421 squadron when enemy aircraft were spotted, while 403 stayed as top cover. They were south-west of Amsterdam. Abbotts, who was flying Spitfire BS509, coded KH-H,  described what happened next;

“I spotted 2 – ME 109s below. Winco ‘Johnny’ Johnson told me to keep an eye on them; finally he said ‘Go after them’. I rolled out of the formation and was just coming up nicely through the odd puff of flak when something hit me; lots of oil and smoke. I fired anyway but was out of range.”

According to a German soldier, who witnessed the action from the ground, Abbotts had been ‘bounced’ by a Me110 while he had been concentrating on attacking the Me109s.
Jimmy turned towards the North Sea, but his engine failed and he was still being pursued by the 109s;

“I spun away to about 4,000 or 5,000 feet and decided to bale out. I rolled over and came out but hit the fuselage and was knocked out. When I regained consciousness, the shoulder strap of my parachute was around the aerial mast. I was hanging on the right hand side of the a/c, the a/c was right side up, wings level and in a nice glide. I held on with one hand and tried to tear the chute out, but I was getting too close to the ground. I decided that it was all over. And thought ‘I’ve had it’. I passed out. I woke up 3 hours later safe in the arms of – Germans.
Several letters from Dutch people tell me that the a/c just missed a house, belly-landed, jumped a ditch, went through a hedge and started to burn while I was still hanging on. They cut me free.”

Somehow Abbotts had survived..His only injury was a broken leg.
The pilot’s weight hanging over the side of the fuselage, together with the way the controls had ended up, resulted in a gentle flat spin and the aircraft glided earthwards with fate at the controls..Albert Philipps, a resident of Hilegom, watched Jimmy’s perilous descent towards the bulb fields…

“The weather was beautiful, but the sky was dampy (fog) so we could not clearly count the bombers and the fighters we just only could hear.
Suddenly however a plane came down circling around with its engine heavy smoking. We noticed at once when it came out of the damp that it was a British fighter. The lower it came the more scared we got because we didn’t know where it should come down, because of its circling around. You should have seen the workers in the fields, they were also running a circle. When the plane came lower we saw the pilot was hanging besides the plane near the tail. His parachute was hooked on the little radio mast, behind the aviator’s seat. He was a lucky fellow, because the plane came on the ground all by itself with not too much speed, after flying over the roof of a little house with it missing it by a few inches. The aviator was dirty and black from sand and mud, and injured not severely. I asked what he was, and he said a ‘Canadian’. Then I had to shut my dirty mouth, so as the German soldiers said to me, which showed up by that time.”

Jimmy Abbotts became a Prisoner of War and was taken to Stalag Luft III, where the Great Escape took place. He did not attempt to escape but did exercise sessions in the yard while men made the tunnel. After the War, he returned to his hometown, Owen Sound, Ontario, Canada. Jimmy got married and had two children, but was sadly killed in a drink-driving accident on December 19th, 1959.

I haven’t been able to find out a great deal about Jimmy’s life, but he is mentioned in the 403 squadron Operations Record Book entry for 27th March, 1943;

“Sgt J.E. Abbotts was posted back to the Squadron from AFDU. He had been with us at Catterick.”

The Air Fighting Development Unit (AFDU) was an air technical intelligence part of the R.A.F. which developed operational tactics and tested captured enemy aircraft. Fellow Canadian, Hugh Godefroy, also flew for AFDU and used it as an opportunity to significantly increase the number of aircraft types he had flown. It’s a tantalising hint that Jimmy may have had an interesting time in the RCAF before he was taken Prisoner of War.

Rest in peace, P/O James Elmer Abbotts, and thank you for your service.

Stephen M. Fochuk has written a great article about Abbotts for the Vintage Wings of Canada website. You can read it here.

Sources:
Many thanks to Pierre Lagace for allowing me to use photos from his excellent 403 squadron blog..links below: