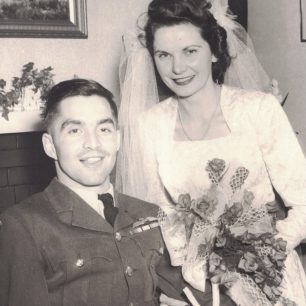 Bob and Marie on their wedding day
Graham Bennett 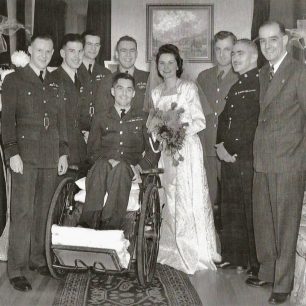 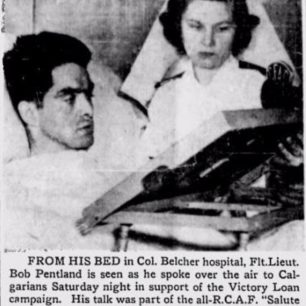 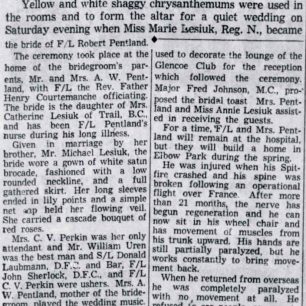 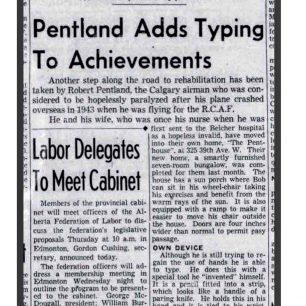 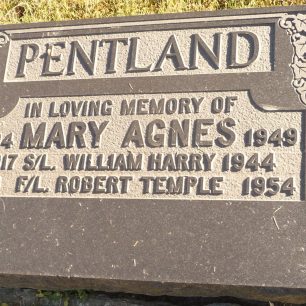 His accident is mentioned in the squadron’s Operations Record Book..

“Today was sunny with very little cloud.  The Wing went on two sweeps today.  F/O Pentland damaged one FW 190 on the first operation and 421 Squadron destroyed four FW 190s, one ME 109 and damaged one FW 190 and three ME 109s.  S/L Lambert of 421 Squadron is posted as missing.  On the second sweep no enemy aircraft were seen………..F/O Pentland crash-landed on the edge of the aerodrome today after the second sweep.  He was admitted to the hospital in a very serious condition, and action has been taken to have him posted non-effective sick to 127 Airfield HQ wef 20-12-43.”

However, the entry in the informal squadron diary gives more away…

“Another tragedy occurred today. Bob Pentland’s motor quit and he hit a tree landing. He broke his neck and apparently there is little hope for him: we hope he will recover.”

The records of 2704 Anti-Aircraft Squadron, RAF Regiment, Kenley, indicate that on 20th December, 1943, they mounted a guard on a crashed Spitfire behind Grove House, Whyteleafe, at 1500hrs. As no other crashes were recorded at Kenley that day, it seems likely that this was Pentland’s aircraft. The guard was dropped on the 22nd, presumably when the Spitfire was removed from the site.

There was more news on the 23rd December…

“Bob Pentland is in pretty bad shape. Paralysed from the neck downwards. We hope he will recover. He is a great athlete, so if it is physically possible, he should pull through.”

W/C Hugh Godefroy and a group of Bob’s friends from the squadron went to visit him in hospital:

“Having remembered what a fine physical specimen he was, I was horrified to see how much the muscles of his arms and legs had wasted away in just these few weeks. His hands, like bony claws, lay motionless on towels at his side. His head was held in a nest of pillows and small beads of perspiration dappled his forehead. All he could do was follow us with his eyes, and he spoke so faintly that you had to get close to hear what he was saying.
‘You guys are the only ones that would understand, for God’s sake help me. Do something! Cut my throat, shoot me in the head! For God’s sake have mercy! I can’t stand it, this is a living death!’
As we stared at him in silence there wasn’t one of us who didn’t feel tempted to comply. Fortunately, they only let us stay for a moment.”

When Bob was repatriated to Canada, he was completely paralysed and refused sustenance or company, but that changed when he fell in love with one of his nurses, Marie Lesiuk, and she became the motivation for his efforts to recover from his injuries.


Graham Bennett, who knew the Pentland family as a boy, remembers:

“[Bob] refused to stay in the Belcher and first moved into his parents living room with Marie looking after the nursing and orderlies coming out to the house. He treated the orderlies very well and there was great kidding back and forth. There were  a host of friends who came by daily, Stew Aitken, manager of the Glencoe Club, Billie Uren who he had played endless badminton and tennis with, John Sherlock who was a childhood friend of both boys and survived two tours as a fighter pilot including one in Malta. Sherlock was in 421 Squadron at the same time Bob was in 403 flying under W/C Hugh Godefroy out of Kenley.”

“Bob and Marie built a nice bungalow on 39th Avenue east of Elbow Drive in Elbow Park and it was a happy place full of friends and was designed to accommodate Bob and was built by John Sherlock’s dad.”

Bob was able to type using a pencil tied to his hand and had adapted controls for his electric wheelchair. He worked as a sports announcer, giving daily radio broadcasts. He died shortly after kidney surgery in 1954, aged around 35, in Col. Belcher Military Hospital, Calgary.

Robert Pentland was born at Lake Saskatoon, Grande Prairie Census Division, Alberta, Canada, in 1918, and, together with his brother Bill, had shown promise as a sportsman from an early age. Bob won the Calgary Men’s badminton title, aged only 15.
He was Alberta champion in 1935 and 1936 and the following two years he was a finalist in all three open events in the Canadian championships.
Bob held the Calgary and Alberta tennis doubles championships in 1938. In hockey he played with the New York Rovers of the eastern league and with Edmonton Athletic Club juniors.
In Rugby he was a teammate of Tony Golab with the RCAF Hurricanes when they lost the Grey Cup semi-finals in 1941.

Frequently, Bob and his brother Bill (who was also in the RCAF) triumphed together, forming an outstanding sporting partnership. S/L William Harry “Big Bill” Pentland DFC, was C.O. of 111 and 440 squadron, flying Typhoons, before he was killed in action on 7th October, 1944, three trips short of completing his second tour of operations. He is buried in Rheinberg, Germany. Graham Bennett, who knew the Pentland brothers well, has written about them, here.

Graham Bennett’s caption for Bob and Marie’s wedding photo (above):
From the left; Vance Perkin who Bob played badminton with at the Glencoe; John Sherlock great friend before and after RCAF service; Don Laubman who went overseas with Bob. He had an incredible WWII career and rejoined the RCAF in January 1946. He retired as a Lieut. General. He and Doug Lindsay (RCAF) opened the Canadian Tire Store in Red Deer. Jim MacDonald-I can’t find his war record but he shot down many German aircraft; Dr. Mitchell who was Bob’s surgeon: Col. Fred Johnson who was a great friend of the Pentland family and was an executive in Motor Car Supply who Bob worked for before the war; Doug Gunn who was a tennis or badminton partner of Bob’s. There are great RCAF stories in that group.
More of Graham Bennett’s memories of Robert Temple Pentland.
I thought of some additions such as the name Bob gave to Stew Aitken, Manager of the Glencoe, who was a champion badminton player when he was a good deal younger and not as heavy. Stew had grown fat and had a very red face but he was a great guy and a good friend of mine as years went on. Bob dubbed poor Stew as “Baron Farouk”, Farouk being the king of some Middle Eastern country, or the shortened version of just, “The Baron.” Billie Uren couldn’t join the service because of medical reasons but all these fellows loved to play the horses and there were great horse handicapping sessions when they had the race sheets before the race which they would attend or bet through a bookie. Bob had a great picture of ‘The Baron’ and Billie Uren walking together both looking at a race sheet and arguing vigorously. I was drawn into this game as a young junior high kid with a deal Bob proposed that if I would mow the lawn then they would place a bet for me in payment. Needless to say, I wasn’t sure that they ever placed a bet for me but I never won and I mowed his damn lawn many times for fun and no profit.

Bob had a great sense of humour and my mother was subject to this one day in the summer at the old Pentland house that was only two doors away from our house. My Mother, who everybody called, “Gladys” including my friends and I, let out one of her world class sneezes, that I inherited, and Bob called out from his back yard, “Was that you Gladys?” My mother replied, “Yes Bob” to which he said, “I thought so Gladys because I heard your teeth hit the back fence!”

Bob was unfailingly kind to me as a young kid. He bought me a new badminton racquet just like the ones he played with in tournaments and on occasion would smash against the post holding the net when things weren’t going well. It was a Slazenger Queens and at age 90 I still have it. He arranged for Marie’s first aeroplane ride and insisted that I go with her. We circled their house and Bob was out there in his wheel chair waving at us. He had a nickname for everybody and mine was, “Champ” which was nice because I wasn’t one.

Years went by and I had graduated in Business from UofA and was serving my articles toward writing the final Chartered Accountant exam. I continued to be a frequent visitor at Bob and Marie’s but I was home studying one night and Bob called me saying his orderly hadn’t shown up and would I go over and help turn him. I hustled right over and the orderly had been there all the time but he wanted to tell me that he was going into the Belcher the next day to have Dr. Mitchell clean out his kidneys again. We had a visit and I wished him well and went home. The next day I was coming home from the office and I saw Stew Aitken, Billie Uren and John Sherlock coming out of Mr. Pentland Senior’s house so I kept on walking an extra house and said, “Hi, what’s going on?” Stew said to me, “Graham, Bob’s gone.” I turned around and went into my house in tears because Bob was like the older brother I never had, being an only child. He had called me over to his house the night before because he knew he wasn’t going to survive this surgery. Marie told me that he came to after the operation and said “I’m going” and just passed away. Such a fun guy and such a friend. He got more out of life as a quadriplegic than a lot of people get who have all their faculties. I am attaching my life history for you to scan because I have always wished that he had lived longer, had met my dear wife Beverley and shared in some of my peripatetic triumphs along the way.

One more story about Bob relates to the time when he was doing his Service Flying Training at Currie Barracks (#3 SFTS) and the athletic director wanted Bob and another fellow to play hockey for #3 SFTS and the boys said no, because they wanted to study and become commissioned officers. The athletic director said that he could guarantee that they would pass first and second in the class so the boys agreed. The bad news was that the Athletic Director was transferred to another station right before the exams and Bob and the other hockey player graduated as Sergeant  Pilots. Bob was made an instructor until he and Laubman would fly their Harvard down the railroad tracks until they saw a train coming and then turn on the Harvard’s landing lights! Many a train ended up with flat wheels and very soon the RCAF thought overseas was a better alternative to instructing for both of them.

While playing hockey for #3 SFTS some opposing player high-sticked Bob and cut his forehead and they decided to teach this guy a lesson after Bob was patched up. Out they came and gave this guy a body check that put him over the boards, such nice boys!

Many thanks to Graham Bennett, Anne Gafiuk, John Verner Slater and ‘Bear Hugs’ from findagrave, for their assistance with research and photographs.
Thanks also to Colin Lee who obtained information from The National Archives files on 2704 AA Squadron, RAF Regt.