You are here: Home>History>Timeline of RAF Kenley>World War II>F/Sgt. Jack Parsons Remembered by F/Sgt. Vic Milner - His "Buddy" From 615 Squadron 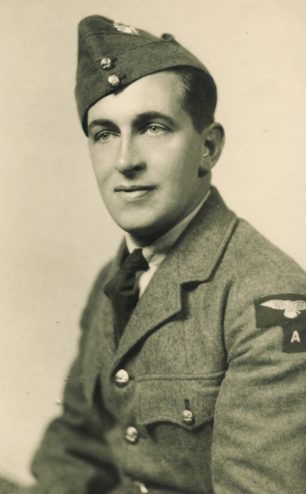 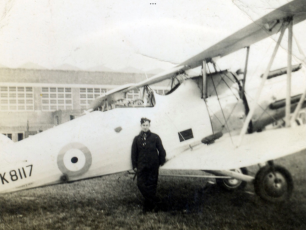 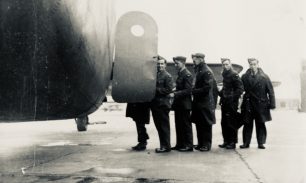 Croydon Airfield, November 1939, boarding an RAF Ensign bound for Merville, France. Jack is second in the queue to board.
Ian White via Peter Parsons 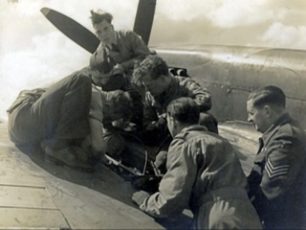 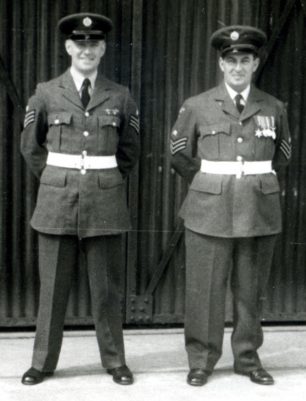 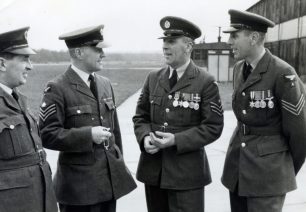 We are indebted to Peter Parsons for sending in the information he has about his Father’s service with 615 (County of Surrey) Squadron, much of which comes from Jack’s Service file and a letter written to him in 1999 by Vic Milner, who served alongside Jack on 615’s ground crew.

“Jack enlisted first in April 1938 and being of the same trade – W/T metal riggers – we teamed up as buddies.

“Re-reading your resume on your Dad is fairly accurate. Jack’s service number is slightly ahead of my original number 819038. He enlisted in March ’38, I in April ’38. Being of the same trade, U/T [under training] metal riggers, one like any class, teamed up with a buddy. Attending summer ‘39 practice camp, we were recalled to Kenley during the second Thursday of the two week camp, and were promptly embodied into the regular RAF, collecting our £5. Fortunately, by now, we had both passed our trade test as AG1 metal riggers, both missing our Leading Aircraftman by a few percentage, mine was 67%. For the chance to sew up your props badge, it was 70% or above. The squadron moved to Croydon to enable the installation of runways at Kenley.

“Now we were all being jabbed for overseas and signing away one of our rights, there being two. One was only to serve in the UK, the other to only serve on our enlisted squadron. Both of these eventually went by the board as the war years dragged on. We had an uncomfortable hour after our jabs, during which time Jack Parsons and I were employed on a tank change. We both kept going rather than report sick, which would have meant not being allowed off camp that evening.” *

“We left Croydon in November 1939 on an Imperial Airways Ensign to land at Merville, a mud-up-to-yer-knees airfield; grass, no runways. This necessitated a move to Vitry, another grass airfield along the Arras Douai road.

“By now the warmer days had arrived with the balloon going up and Jerry pushing west. We returned to Vitry to service U/S kites. I recall fitting a new port wing to a Hurricane which we were now flying, only to be instructed with others to burn the aircraft before a hurried departure to Auchy in a coal mining district from whence we, some twenty remaining 615s, were airlifted out by Ensign arriving the evening of May 20 at Hendon, then on to Uxbridge to be re-kitted out and on to two weeks leave.

“The rest of the squadron made their own way out of France via the docks or the best way they could. After leave, we were posted back to 615, now returned to Kenley. Jack achieved his tapes ahead of me – at the time we were both in the servicing echelon whilst the squadron had earlier departed for Valley in North Wales where I was to rejoin them on promotion to corporal. This for me, though at the time proved a great posting. Later in ’41 the servicing echelon with a large number of 615 were posted overseas only to arrive at Java and Sumatra only again to be evacuated ahead of the Japanese. It being the Dutch Resistance accounting for a number of Japanese parachutists, not before unfortunately some of our chaps were killed. We, that is 615, were on the boat overseas in March ’42. Not to know where! After a re-fuel and re-water in Freetown arriving in Capetown. Here the convoy separated some going north for the desert campaign, whilst 615 proceed east after a 3-4 day shore pass to arrive in Bombay April ’42. That started a four year tour getting the Japanese back to their own country, from Bombay via train to Calcutta, two days later found us at our first Indian Airfield, Jessore, a concrete runway cut out of the jungle, where we met up again with the Java Sumatra survivors. At Jessore we received our Hurricane IIc.

“After two years moving from one airfield to another, we were back to Alipore for re-equip with Spitfire Vc. These were good against the Japanese but not good enough, so we re-equipped again, this time with the Spitfire IXc. They proved excellent, they enabled our pilots to gain the height advantage which on three occasions manage us to down Japanese photo reconnaissance planes, they did not survive to return with any pictures.

“I apologise for this tirade of events only to illustrate how Jack and I lost touch until ’46  when we met up once again on re-enlisting back with the new post-war 615, dropping rank to corporal, later to get our third stripe back, later again to have the crown. Thus, as flight sergeants, we were disbanded in 1957. Jack and I enjoyed ourselves at the subsequent practice camps in Germany and Malta.”

Peter picks up Jack’s story at the end of The Battle of Britain:

Back from leave, and with the Battle of Britain seemingly over, Jack was recommended for training as an Airman Pilot (non-commissioned) and was passed medically fit, but he withdrew the application in December. His record does show him being transferred from 615 to No 2 Flight Training School and back to 615, but the dates don’t quite align. It also appears he was preparing to transfer to 3 Flight, No 2 AACU (Anti-Aircraft Cooperation Unit), but this wasn’t actioned.

In March, with the rank T/Cpl (temporary Corporal) Jack was transferred to HQ Ferry Service Pools at RAF Kemble which co-ordinated overseas ferrying of single-engine aircraft and was formed in November 1940 within No 41 Group, Ferry Command.

The Ferry Service Pool then relocated to RAF Honeybourne and was transferred to No 44 Ferry Group and renamed 1 Ferry Training Unit (FTU) in November 1941, training pilots for ferrying aircraft to overseas theatres.

In March 1942, now a T/Sgt, Jack moved to RAF Lyneham with the FTU which was redesignated No 301 FTU. Apart from a two week posting to RAF Huntsdon (No. 85 Squadron, Mosquitos), he stayed at Lyneham for two years. In March 1943, No 44 (Ferry) Group was absorbed into the new Transport Command to train crews to ferry aircraft abroad, initially Bristol Beaufighters, Beauforts & Blenheims and Vickers Wellingtons, then Lockheed Hudsons and Handley Page Halifaxs.

In March 1944, Jack moved with his unit to RAF Pershore where No 1 Ferry Unit was formed from No 301 FTU and No 1 Ferry Crew Pool within No 44 Group, ferrying multi-engined aircraft from factories to front-line operational units, mainly Bristol Beaufighters and Blenheims, de Haviland Mosquitos and Douglas Dakotas. This was, of course, the period of the build up to Operation Overlord and D-Day, the Allied invasion of Europe and the Normandy landings in June 1944.

During this posting, Jack spent a month at the Vickers Armstrong factory (possibly at Brooklands) where they built the Wellington bomber, and a week at de Haviland’s factory at Hatfield where they built the Mosquito; I assume both of these were qualification courses. Jack’s records show he was qualified on Wellingtons, Beauforts, Blenheims and Hudsons.

In April 1945, he was transferred to HQ 44 Ferry Service Group, probably back at RAF Kemble, who were responsible for overseas air transport.

With victory in Europe secured in May, Jack was de- mobilised via PDC102 – Personnel Dispatch Centre, Cardington – in September 1945 with a Class A release to Reserve.

With the reactivation of the Royal Auxiliary Air Force, 615 was reformed on 10 May 1946 at RAF Biggin Hill as a day fighter squadron equipped with Spitfire F.14s. Spitfire F.21s were received in 1947 and these were replaced by F.22s in 1948, both marks being flown until 1950.

In July 1947, Jack was released from his RAF Reserve commitment and immediately re-joined 615 at Biggin Hill. Both he and Vic Milner re-joined as Corporals, but both regained their Sergeant stripes and then Crowns, denoting Flight Sergeant.

The squadron re-equipped with Gloster Meteor F.4 jet fighters starting in September 1950. Meteor F.8s were received in September 1951. These were flown in the annual UK air defence exercises and at annual summer training camps. It seems these annual camps at Horsham St. Faith in Norfolk (August 1947), Tangmere (1950), Malta and Germany featured large in squadron activities.

600 and 615 squadrons were great rivals. No 600 had the Queen Mother as Honorary Air Commodore and 615 had Sir Winston Churchill. In September 1954, Churchill was at Biggin Hill to present the Esher Trophy for the Most Efficient Squadron to 615. The Squadron was disbanded two years later.

One thing everyone knows about the Battle of Britain is that it was won by “the Few” in their Spitfires but, in fact, it was the Hurricanes and their squadrons that scored more kills, and, while the skill and bravery of the Pilots – a bravery we simply cannot understand or imagine now – was undoubtedly the deciding factor, without the extraordinary and under-celebrated efforts of RAF ground crews, victory would have been impossible, and the Army and Navy would have not have achieved their later successes in the different theatres and operations without air support from the RAF’s bombers and fighters.

We should be – we are – intensely proud of Jack’s war.

Nb: This paragraph is a quote from Vic Milner which comes from Norman Franks history of 615 Squadron.