You are here: Home>History>Timeline of RAF Kenley>World War II>American Spitfires Over Dieppe - The 308th Fighter Squadron at RAF Kenley 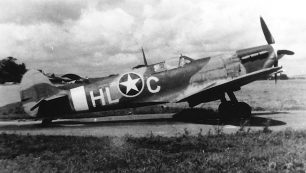 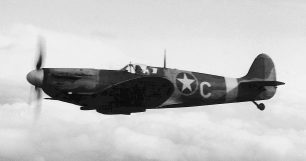 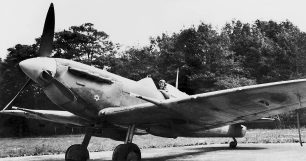 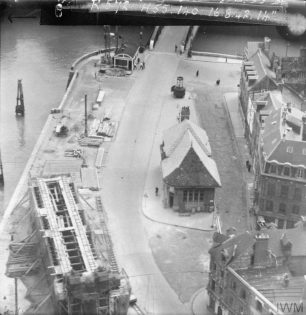 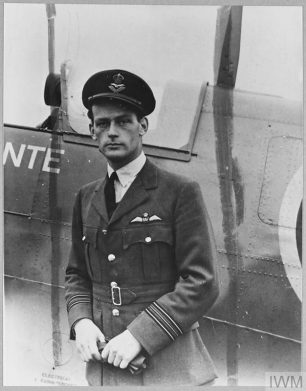 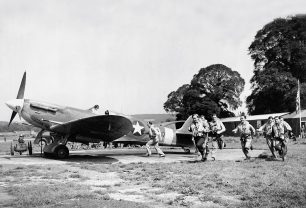 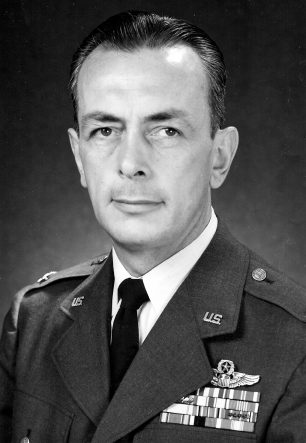 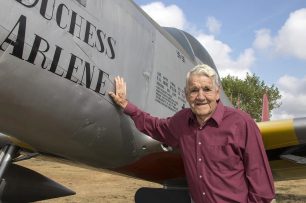 Having left their US-built fighters in America, at Atcham, the 31st were equipped with the Supermarine Spitfire Mark Vb taken from RAF stocks. After a period of familiarisation and work up the squadrons moved south to 11 Group on 1 August 1942, with 308FS arriving at RAF Kenley, 307FS going to Biggin Hill and 309FS to West Hampnett. At Kenley, 308FS replaced 350 (Belgian) Squadron who had moved out to the satellite airfield at RAF Redhill the day before.

The move to 11 Group was a means of providing the Americans with operational experience in the European Theatre, but also, a reinforcement of the Group for the upcoming Operation Jubilee. 611 Squadron, at Redhill, were keen to meet the new members of the Kenley team:

“After some practice flying we stopped early and went to Kenley to the monthly guest night, to meet our new squadron – 308 U.S. Army Air Corps. After a good party we agreed to do an unofficial escort for them tomorrow when they go to do a sight-seeing tour of France.”

308FS took part in their first operational sortie, or “sight-seeing tour”, on 5th August, led by Brian Kingcome with a flight of Spitfire IXs from 611 Squadron. Their role was as top-cover for a Rodeo between Le Touquet and Calais, it was a gentle introduction as their sortie passed off without incident:

“…nothing was seen of the enemy although they did follow us home a long way behind.”

After poor weather precluded operations on 7th and 8th August, 308FS, following some morning training, joined 111 Squadron on the afternoon of the 9th in a feint sweep between Dieppe and Le Havre; again, the sortie passed off without incident.
Building up their experience, on the afternoon of 11 August, 308FS engaged in practice interceptions with the junior pilots of 111 Squadron, while the Kenley Wing performed a feint Rodeo between Hardelot and Sangatte.

As the preparations for Operation jubilee gathered pace, 402 (RCAF) Squadron and 611 Squadron moved to Kenley, for an “exercise”, on 13th and 14th August respectively. Of the five Kenley Wing squadrons, this left only the Belgians of 350 at Redhill. The space at Redhill was filled by 303 (Polish), 310 and 312 (Czech) Squadrons who operated with 350 (Belgian) Squadron on 17th and 18th August. Back at Kenley, the Spitfire V Wing, with 308FS, led by Squadron Leader P R W Wickham DFC of 111 Squadron carried out a diversion for Circus 204 in company with the North Weald and Debden Wings. This mass of Spitfires provided escort to just three Flying Fortresses to just east of Dunkirk and along the coast to Calais, then returned home. This diversion operation marked the third uneventful sortie for 308FS.

Unbeknown to 308FS, Operation Jubilee was fast approaching. As a result they did not take part in any operational flying on 18th August, with the remaining Kenley Wing squadrons also flying at a much reduced level. During the afternoon, all Wing pilots were summoned to Kenley and at 18.00 hours they assembled in the Station Cinema for a briefing, by the Station Commander and Wing Commander Flying, on operations the next day. Afterwards, the 611 Squadron diary recorded:

“We sing a few songs with the band and all went to bed at 10 p.m. in view of tomorrow’s operations.”

Operation Jubilee was a scaled down Combined Operations raid on the port of Dieppe, originally planned as Operation Rutter and scheduled for June 1942. It was one of a series raids planned by Combined Operations Headquarters (COHQ) in January 1942 and was by far the largest to date, including the first use of tanks in support of the infantry. Debate over why Dieppe was selected, and the purpose of the raid, has raged since August 1942, with various explanations being posited. Perhaps the only one that can be ruled out is that it was a rehearsal for the invasion of the Continent. Ultimately the lie of the land around Dieppe dictated a frontal assault was the only option, with all the tragic consequences that followed.

308FS were not called upon to participate in the earliest patrols over the assault convoy and landing area, but were airborne around 7.00 a.m. for their first patrol of the day, likely forming up with 350 (Belgian) Squadron from Redhill. By this time the landings at Dieppe were well underway and the ground mist in France had cleared allowing the Luftwaffe to respond aggressively. Fighter cover over Dieppe flew at between 3,000 and 8,000 feet. For this patrol 308FS flew as top-cover, a vulnerable position where they were exposed to diving German fighters; Blue Leader, 1st Lieutenant Frank Hill, was flying at 8,000 at 8.00 a.m. when the squadron was attacked by around twelve enemy fighters. In the ensuing dog-fight Hill claimed an FW.190 as a “probable”, however, in his Combat Report he recorded the loss of a 308FS Spitfire:

“My number three man called that he was going down and I saw him bale out and his parachute was streaming behind for a good six to ten seconds before it really opened up. He landed in the water and two boats were approaching him. It was soon after that that we came home.”

This would be the only claim made by 308FS during the day however, as they lost two pilots First Lieutenant Robert “Buck” Ingrham and Second Lieutenant William Dabney, it cannot be said for certain who was the pilot of Blue 3. Ingrham would later be captured by the Germans after his dinghy was washed ashore. No trace of Dabney or his aircraft was ever found.

In total 308FS mounted four patrols over Dieppe during the day, this was matched by 111 and 350 (Belgian) Squadron but 402 (Canadian) and 611 Squadrons added a bomber escort mission to Abbeville to their tally. The endurance of the Spitfire meant the Kenley Wing were able to spend thirty minutes over Dieppe before heading for home. The final patrol by the Wing, launched between 15.15 and 15.20, covered the withdrawal of raiding fleet. In three of their four sorties, 308FS were led by Squadron Leader Peter R W Wickham DFC of 111 Squadron who was awarded the Bar to his Distinguished Flying Cross after the raid and, in 1944, was detached to the Headquarters Squadron of the 4th Fighter Group. The Wing returned to base between 16.45 and 16.50 and by 17.00:

“…it was raining hard with thick low cloud”

The Wing had lost five pilots and consequently, at 06.15 the following morning, 308FS took off on an Air Sea Rescue patrol to look for downed pilots, unfortunately their efforts were unsuccessful. A return to normal operations swiftly returned and, later that afternoon, the Kenley Wings took off as part of the escort to Circus 206, a Fortress raid on the Amiens marshalling yards. 308FS formed part of the Spitfire V Wing, along with a 12 Group Wing, providing rear cover to the Circus and flying as the middle squadron at 26,000 feet. German fighters were not tempted into the air and the Circus passed off uneventfully. 21 August brought another Spitfire V Wing operation involving 308FS, they rendezvoused with other Spitfire Wings off Bradwell. The intention was to provide a diversion to Circus 207 on Rotterdam, due to the bombers failing to meet up their escorting fighters returned home. However, the diversion proceeded as planned and the Kenley Spitfires reached the enemy coast at Ostend, they then patrolled south westerly to Dunkirk and, after orbiting the Dover Straits returned to base without seeing any enemy aircraft.

21 August marked the last operational activity for 308FS at Kenley with the next two days being confined to non-operational duties. So, on 24 August, 308FS moved to West Hampnett where 31st Fighter Group were reunified for operations, although 307FS relocated from Biggin Hill to Merston. The Group continued to operate from West Hampnett until November when they moved to North Africa to fly in support of the Torch landings, they continued to fly the Spitfire until April 1944, when they converted to the P-51 Mustang.

Frank Ackerman Hill had taught himself to fly after restoring a vintage glider with his high school flying club around 1937. He began his U.S. Army Air Corps career in 1939 and graduated from flying school in November 1940. After serving as a Flight Commander with 308FS, he became the commander of 309FS and subsequently commander of 31st Fighter Group. He was also the Group’s first ace, achieved while with 309FS, with seven victories to his credit. At the end of his tour of duty he returned to America on 24 November 1943 and remained in the United States air Force until his retirement in 1969. During this time  he had served as the senior air instructor for the New York Air National Guard, served as director of operations at Air Defense Command in Colorado, and was commander of the 33rd Air Division in Virginia. He passed away in January 2012 at the age of 92.

First Lieutenant Robert “Buck” Ingrham survived being shot down on Operation Jubilee and was eventually captured by the Germans after washing ashore in his dinghy. He spent the remaining thirty-three months of the war as a prisoner of war, including time at Stalag Luft III during the Great Escape where he helped excavate the escape tunnels, one of three American airmen to do so. He later claimed his greatest memory of the Air Force was being liberated by troops from General Patton’s 3rd U.S. Army. He remained in the United States Air Force after the war serving for 28 years in Panama, Puerto Rico, Canada and Laos during the Vietnam War, later he flew on the Embassy Run from McGuire AFB. Ingrham then joined Pan American where he worked at the NASA Space Centre in Houston as a contractor on the Shuttle Programme. He retired after 20 years with Pan American.

The 2022 incarnation of 308FS is known as the “Emerald Knights” operating from Luke AFB in Arizona where it trains train pilots for the Royal Danish Air Force and Royal Netherlands Air Force on the F-35A Lightning II.