You are here: Home>History>Serving at RAF Kenley>Ronald Parsonson - No.602 (City of Glasgow) Squadron Ground Crew 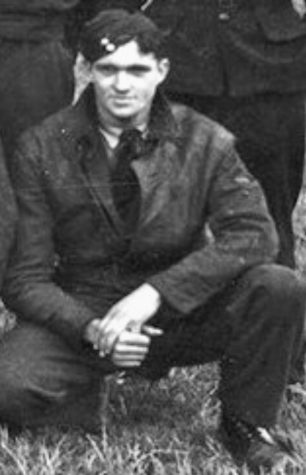 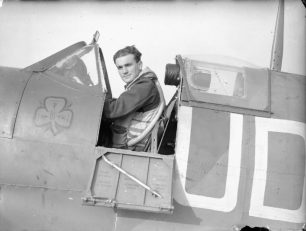 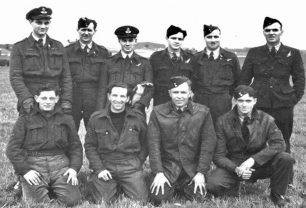 My father, Ronald Parsonson, volunteered for the RAF when war broke out . He was prompted to join the RAF by his school friend and tennis partner Robert (Bob) Palmer, who was later awarded a posthumous Victoria Cross as a Squadron Leader whilst acting as a Master Bomber in an attack on the Gremberg Railway Yards.

After square bashing on Blackpool Promenade he was sent on a Flight Mechanics course at nearby Wharton. While at Wharton he was on a parade when volunteers were called for. As no-one stepped forward the Flight Sergeant in charge began the normal service practice of getting volunteers by using weeding out questions:

“Step forward all those from the South of England” – 5 came forward.

“Step forward all those from Kent” – 3 came forward.

All were asked, “How far is your home town from Rochester?”

The Flt Sgt, much to everyone’s astonishment, said, “Congratulations Lofty, you’ve just volunteered to be sent to Short’s Aircraft at Rochester!”

So, for over a year he lived at home and, wearing civvies, travelled to Rochester everyday on the bus to work on Sunderland and Stirling manufacture.

Eventually the RAF caught up with him and he was posted to Kenley, near Redhill, in Surrey, shortly after the Battle of Britain with 602 (City of Glasgow) Squadron. While there he made a life long friend in Harry Wherry, a Glaswegian who was a pre war member of the RAFVR Squadron, and they worked together, on the flight line, servicing Spitfires and other aircraft.

After one such routine F700 service on an Anson the pilot asked if Dad would like to take a flight where his home was and if there were any landmarks nearby. On arriving at Gravesend he told the pilot that the Shaw’s Laundry chimney was immediately opposite his parents’ house, whereupon the pilot flew round the chimney several times, (much to the delight of the staff, who rushed out to watch) to enable Dad to observe his home from the air.

When he returned home on leave later, his mother said:

“You and your bloody Air Force, some idiot kept flying round and round the chimney and blew mine, and the neighbours washing, off the line and down the gardens. Took us days to sort it all out!”

He told me that he never did own up that it was he who had directed the pilot to the chimney!

At Kenley he learnt how to top up the oil on Spitfires, between sorties, with the engine still running (a dangerous procedure, as the filler cap was just behind the propeller) and to change a wheel in an emergency by 2 men bending beneath the wing and straightening their backs while the third replaced the wheel, then rolling away under the wing to enable immediate take-off – something he later demonstrated to the Battle of Britain Memorial Flight (BBMF) at Coningsby,  during a visit arranged for his 65th birthday, when he was also allowed to assist with the pre-flight servicing of the ‘City of Lincoln’ Lancaster. He was immensely proud of the young people who were looking after the BBMF aircraft so carefully.

He was once hauled up before his flight commander by the Service Police on a charge, which proceeded as follows:

Service Policeman: “Riding a bicycle without means of illumination, Sir”

Paddy Finucane: “This man is my Flight Mechanic. Every time I fly, my life is in his hands. For all I care he can cycle around here (Kenley) stark b…..k naked, singing God Save the King. Now f..k off out of here!”

He was then posted to Iceland, for 6 months, in the winter season, working on Liberators. At the end of that detachment he was posted to 625 Sqdn at Kelstern, Lincolnshire, for the remainder of the war working on Lancasters, specifically the aircraft of Warrant Officer Ted Ellis CGM and Flight Lieutenant Jack Ball DFC (with whom he remained lifelong friends).

Bombs are, by their very nature inert, until electrically fused on take-off but, always handled with care. On one occasion, while a 4000lb ‘Cookie’ was being loaded, the cry went up ‘bomb loose’. Dad swore that he ran 100yds to the nearest slit tench in under 7 seconds, passing another erk on a bicycle!

Operational secrecy was always tight but, the ‘erks’  nearly always knew the where destination was before the aircrew were briefed, simply by the fuel load that had been ordered.

While at Kelstern, there was no flying for a period due to heavy snowfall and the ‘erks’ took great pleasure in blocking off the chimneys of the Officers Mess with snow and, when the occupants emerged from the smoke, bombarding them with snowballs! What ensued was described by Dad as ‘the world’s greatest snowball fight.’

Ron retained his love of the Merlin engine, Lancaster and Spitfire until his death in 1997.

Many thanks to Keith Parsonson for sharing his Father’s story. For further details see: A Seven Year Scratch – Memories of a World War II Pilot – Arthur John ‘Jack’ Ball, DFC)