You are here: Home>History>Serving at RAF Kenley>An unexpected guest at dinner – June 1927

An unexpected guest at dinner – June 1927 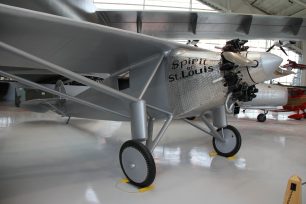 The Spirit of St Louis: the aircraft in which Charles Lindburg made the first solo crossing of the Atlantic Ocean

Due to its proximity to London, RAF Kenley received many famous visitors over the years. Possibly none more so than the 25 year-old Charles A. Lindbergh in June 1927, following an epic 33½ hour first solo crossing of the Atlantic from New York to Paris in his aircraft the Spirit of St Louis.

After touching down at Le Bourget aerodrome in Paris on 21 May 1927, he was feted for a week like a film star. On 30 May, at the invitation of King George V, Lindbergh flew his fabric-covered Spirit of St Louis to England.

Dr. George Conyne, lecturer in US History at the University of Kent, described the scale of public interest Lindbergh attracted 1:

“You have to put together the sort of fame we associate with someone like the Queen, J.K. Rowling and the Beatles together in order to understand how famous this man was.   In modern times we’ve never really seen anything which was quite so unifying as the adulation Lindbergh received both in the United States as well as in Great Britain.”

It was estimated that up to 100,000 people were on hand to welcome his arrival at Croydon aerodrome. They broke through cordons and swarmed around the aircraft:  a strong police presence ensured the crowd didn’t help itself to fabric souvenirs from the aircraft as had happened after arrival in Paris, where his plane had to be completely re-covered.  Over three days in England he met senior members of the Royal Family and was given a rare standing ovation by MPs when he visited Parliament.

Of his visit to Buckingham Palace, Flight magazine 2 noted:

After this he went to Buckingham Palace and was presented to the King and Queen. His Majesty asked many questions about the great flight, and then bestowed upon Lindbergh the Air Force Cross. As the airman was leaving the Palace, little Princess Elizabeth waved her hand to him, whereupon Lindbergh went up, shook hands and patted her cheek!

On 2 June, with his plane safely on the Southampton docks crated up for its return to the USA, Lindbergh drove to RAF Kenley.  From here he was to fly to Paris in a loaned RAF fighter aircraft before boarding an American battleship, the USS Memphis, at Cherbourg the following day to return home.

Things didn’t go quite according to plan, as the entry from Kenley’s Operations Record Book 3 reveals:

Col. Lindbergh arrived at Kenley to fly from here to Paris in a Woodcock aeroplane. His departure was delayed owing to bad weather conditions & Col. Lindbergh remained overnight in the officers’ mess.

Col. Lindbergh left Kenley for Paris at 0650 hrs escorted as far as Lympne by two Gamecocks from 32 Squadron.

Although his departure from Kenley was meant to be a secret, ‘half a hundred’ 4 locals turned out to wish him farewell.  He landed in Paris just after 10am.