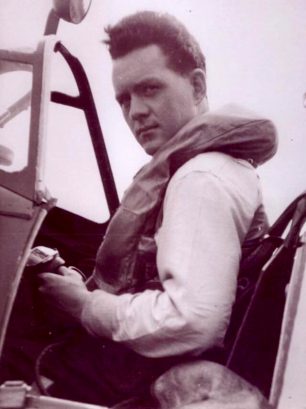 On 13th July, 1943, a routine Fighter sweep for 403 squadron came to a disastrous conclusion for F/O James Ian McKay, when his engine cut out during a downwind landing, causing him to crash land on the airfield at Kenley, hitting a “sand pit,” according to the accident card.  He was taken to hospital in a serious condition.

I haven’t been able to ascertain any details of Mckay’s injuries, but happily, he survived not only this crash, but the entire War, returning to Canada and eventually becoming a Superior Court judge.

JAMES IAN MCKAY was born in Owen Sound, Ontario, Canada, on April 1, 1921 to Norman McKay and Catherine Ferguson Foote. He grew up in Owen Sound and attended Dufferin School. During the summer, Ian worked for the Owen Sound Transportation Company as a Watchman/Wheelsman on the S.S. Manitoulin. After graduating in 1939, Ian worked for the Canadian Imperial Bank of Commerce until he enlisted in Toronto, at the age of 19, in August 1940.
During his time in the R.C.A.F. as a fighter pilot, Mckay served in Halifax, Iceland, Scotland and England, receiving seven campaign medals.

CANADIAN FLYERS DEMONSTRATE CHIVALRY IN WAR IS NOT DEAD
Hard – Hitting Fighters Hold to Scruples in Tough Going
BOCHES DIFFERENT
With the R.C.A.F. Somewhere in England, June 11, 1943 — (CP) — Chivalry in war may be on the wane (this is a very tough war), but it has yet to disappear altogether from aerial combat. There are still some niceties observed in the air by fighter pilots of both sides in this war.

“Flying Officer J.I. (Skip) McKay, of Owen Sound, Ont., said a lot must depend on the way you feel in the air, which may account for some of the things he ran across during fighter work in Malta.
Shoot Own Mates.
“Sitting here in the mess, we all say no, we wouldn’t shoot a man in a parachute,” said Skip. “None of us would want to think otherwise. But in the ‘Med’ I’ve seen one of my best friends ‘get it’ while he was going down in his parachute so I guess everybody doesn’t think the same way. “Out there, too, I’ve seen the Jerries shooting up fellows in dinghies. “Once he even saw them shooting up fellows in dinghies when Skip and his flying mates knew these targets were Nazi airmen who had been shot down. “What did we do then?” asked Skip. “Well,” he smiled, “to tell you the truth, we just laughed like hell and went along home.”

After he was discharged in May 1945, McKay began law school at Toronto’s Osgoode Hall and completed his law degree in 1949. In 1982, he was appointed a Judge of the Federally Administered District Court of Ontario for Bruce County. On April 1, 1996 at the age of 75, Ian retired as a Superior Court Judge, but continued to serve on a Pension Appeals Board.

F/Lt. James Ian “Skip” Mckay was married twice, the first time in April 1944 to Jacqueline McCullough and then to Loretta E. Briggs in 1983. He had three children, and had become a Great-Grandfather when he passed away on May 22nd 2015, at the age of 94.

Rest in Peace Sir and thank you for your service.

Sources:
Special thanks to Emily Jolliffe of the Bill Bishop Home Museum, Archives and National Historic Site, Owen Sound, Ontario, for information and the wonderful photo of James Ian McKay in his RCAF days…
https://www.owensound.ca/en/billy-bishop-museum.aspx
Many thanks to Colin Lee for information from the accident card.