You are here: Home>History>Timeline of RAF Kenley>World War II>Leading Aircraftman "Taff" Powell - 253 Squadron during The Battle of France

Leading Aircraftman "Taff" Powell - 253 Squadron during The Battle of France 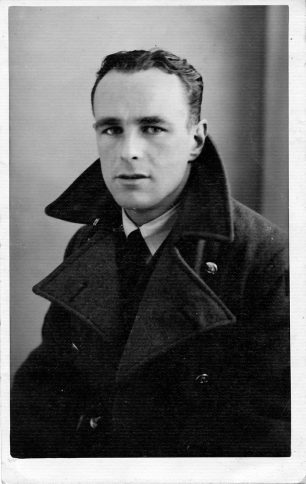 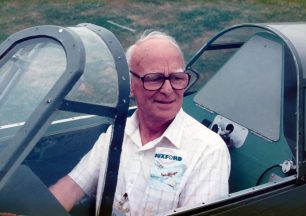 Frederick Gordon Powell sitting in a Hawker Hurricane of 'The Fighter Collection,' taken in 1992.
©️Stephen and Lynne Reglar

Stephen Reglar has generously allowed us to share this article that he wrote for the Battle of France (RAF 1939-1940) facebook group, about his Father-in-Law, “Taff” Powell, who served with 253 Squadron.

My late father-in-law, Welshman, Frederick Gordon “Taff” Powell, joined the RAF in 1936 and trained as a fitter/mechanic and worked on Oxfords, Audaxes and Blenheims amongst other aircraft. May 1940 found him at RAF Northolt with Green Section, “B” Flight, 253 (Hyderabad) Squadron with Hurricanes. What was known later as the Battle of France was in full swing and fighter aircraft were being sent to France from the RAF to try and hold back the advancing enemy.

253 Squadron had not been reformed very long at RAF Manston, before it moved with its Hurricanes to RAF Northolt in February, 1940. They were a rag bag collection of Hurricane Is with fixed pitch two bladed propellers, no armour plating, fabric covered wings and obsolete radios. All their aircraft had been “donated” by other Hurricane Squadrons – i.e. directed to hand over certain numbers of aircraft. You can imagine which ones they parted with.

Whilst at Northolt at least three of 253 Sqn’s pilots were posted as replacements to 3 Squadron at Merville in France. . Not long after “B” Flight (6 Hurricanes, pilots and groundcrew) of 253 Sqn were ordered to France – John Greenwood was one of those pilots as was Sgt. Pilot Gilbert Mackenzie and father-in-law (Taff) was one of the fitters in the groundcrew. “Mac” and father-in-law were friends. Meanwhile “A” Flight which had remained at Northolt moved to RAF Kenley around this time and was subsequently, sent, each day, to bolster the Air Component in France and return to base in the UK in the afternoon.

Recently, following the death of father-in-law, aged 97 years, some papers were discovered with very brief notes of an account of the next few days. He did not talk a great deal about his wartime experiences, but his memories of France and the chaos remained with him.

Thursday 16th May “Taff” and other groundcrew of “B” Flight left RAF Kenley for RAF Manston. They were then flown in an Ensign aircraft to France – whether it was direct to Lille/Marcq is not known, but they slept in that aircraft on arrival. Friday 17th May they were at Lille/Marcq and billeted on a farm adjacent to the airfield – their accommodation being a barn. The family at the farm were very hospitable and did their best for the groundcrew; they were able to get a meal of eggs in a local village. They spent the day attending to their aircraft and ground equipment, not really knowing what was going on. After sleeping in the barn, the morning of Saturday 18th May saw them being told they were now just a mile away from the front and they were to be at immediate readiness to move; each airman was issued with 100 francs. As the day went on there was a lot of aerial activity and “B” Flight flew a good number of sorties and claims made for damage inflicted on enemy aircraft. The notes in the little diary do not give away anything about the atmosphere or conditions then prevailing.

On the morning of 19th May 1940 everyone was awoken by the sound of aircraft and gunfire – it was 0720 and five Bf.109s had just shot down two Lysanders over the airfield. “Mac” and “Taff”, using a bucket of cold water, wet shaved alongside each other outside of the barn. “Taff” asked “Mac” how he thought it was going. “Not good” was the reply. Later that morning, around 1000 the Hurricanes were scrambled and Mac and the Flight Commander, Flt Lt. Harry Anderson, failed to return. Later it was learnt they had been shot down in their Hurricanes and killed.

That afternoon, 1750hrs the order was received to destroy any unserviceable equipment and make for the Coast overland. Quite how this was managed is not known, (some groundcrew travelling via Arras) but they reached Boulogne at 0520hrs on Monday 20th May and had a few hours at a rest camp before breakfast in a restaurant for 50 francs and were bombed (no charge!). It would seem they managed to board a vessel and cross the Channel to Dover, spending the night at Tidworth.

The following day, (the date is not clear but thought to be the 22nd May) they proceeded to RAF Kenley arriving 1800hrs. Accommodated in dispersal huts they were reunited with some of the aircrew from France – Plt Off St. D. Jefferies being one, and supplier of a crate of beer for the returning groundcrew. The following day, Friday, they travelled to RAF Kirton-in-Lindsey arriving at 1000hrs, Saturday 25th May where the squadron was now posted. That day the Squadron was declared non- operational. It had taken heavy losses with men and machines and it needed time to lick its wounds and build up its strength. It stayed there until July – with some detachments at Coleby Grange and Ringway (now Manchester Airport) – when it moved to Turnhouse and then Prestwick in August – both in Scotland. Later that month it returned to Kenley having been declared operational and joined in the Battle of Britain. “Taff” was, almost immediately, posted away from 253 Sqn to 235 Squadron at RAF Dyce using Blenheims – such were the demands of the Service.

“Taff” continued with the RAF until 1943 when he was invalided out of the service. He never, ever forgot those hectic days, the chaos, the refugees and the people he served alongside. His friend “Mac” was always in his mind and he was often casting his mind back to that farm, that barn and their conversations on the morning he was shot down. “Mac” didn’t get the opportunity to be “One of the Few” since he became “One of the very Few.”