You are here: Home>History>Timeline of RAF Kenley>1917-present>47 Days: Kenley & the Battle of France

47 Days: Kenley & the Battle of France 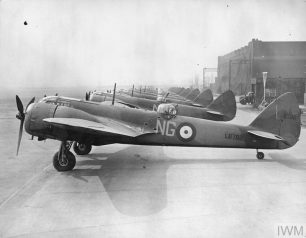 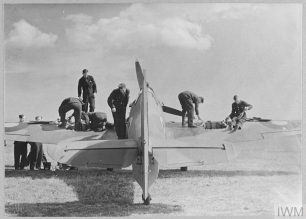 37 ENEMY AIRCRAFT SHOT DOWN BY ONE SQUADRON IN A DAY (CH 191) Original wartime caption: During a subsequent patrol the 'Defiants' accompanied by 'Hurricane' aircraft shot down a further 12 enemy aircraft and damaged three others. One of the 'Hurricanes' is here seen being re-armed immediately on its return ready for yet another patrol. Believed to be RAF Manston
Copyright: © IWM. Original Source: https://www.iwm.org.uk/collections/item/object/205442051 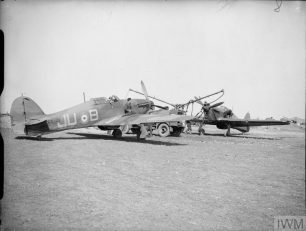 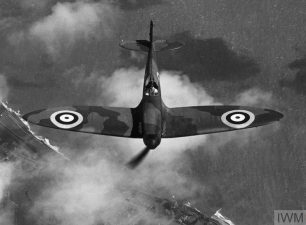 RAF Kenley is more commonly known for its role in the Battle of Britain or the Canadian Wing, under “Johnnie” Johnson, but it also featured heavily in the Battle of France. Between 10 May and 25 June 1940 eight squadrons, or parts thereof, were based at Kenley.

When the Germans invaded France and the Low Countries on 10 May, RAF Kenley was in the final stages of a major reconstruction begun in September 1939. The severe weather early in 1940 had greatly impeded the progress of the works. The majority of the facilities were complete but work on the dispersal pens was still ongoing. At the time the flying units stationed at Kenley consisted of “B” Flight of 604 (County of Middlesex) Squadron, with their Blenheim fighters, who had arrived at Kenley on 27 March and the Hurricanes of 3 and 253 Squadrons. 253 Squadron had only arrived on 8 May from RAF Northolt.

At 14.00 on 10 May, following the German invasion in the West, 3 Squadron left for Merville. 604 Squadron’s six aircraft of “B” Flight took off on the station’s first offensive mission of the war, when they left Kenley at 15.05 heading for Wattisham to act as part of the escort to the twelve Blenheim bombers of 110 Squadron in an attack on beaches north of The Hague. The target was a string of Ju.52s, which had landed on the beach the bombers destroyed two of the machines in their attack. 604 Squadron then strafed the transports destroying four and damaging the remaining three. However Blenheim L1517 flown by Pilot Officer Joll was hit by ground fire and force landed, fortunately both crew escaped safely and returned to friendly lines.

253 (Hyderabad) Squadron had arrived at Kenley on 8 May but, as the situation on the Continent became more chaotic as the Germans advanced, they quickly sent a Flight to France on 16 May. This lead to a shortage of fighters at Kenley, “B” Flight 604 Squadron had moved out to Manston rejoining the rest of the squadron on 13 May, the day the Germans crossed the Meuse at Sedan, and stopgap measures were put in place to make good. In rapid succession flights from 111 and 229 Squadrons were sent to Kenley to form “Composite Squadrons” with the remaining Flight of 253. Lasting only a few days these “composites” were disbanded by 24 May, when 253 Squadron also left Kenley.


The chaotic scenes on the Continent were almost matched by those at Kenley, with 64 Squadron moving in from Church Fenton on 16 May was swiftly followed by the arrival of 615 County of Surrey) Squadron on 20 May and 17 Squadron from Debden on 24 May. At this point, 64 Squadron had only been operational on their Spitfires for four weeks, having converted from the Blenheim fighter in April. 17 Squadron stayed only sixteen days at Kenley before being sent to France, but had been involved at the height of Operation Dynamo. 615 Squadron, were returning to their “home” station after six months in France. Together with 64 Squadron, 615 formed Kenley’s fighter force going into the Battle of Britain. 3 Squadron also made a brief return to Kenley, in a non-operational role, between 20 and 23 May. Returning from France they quickly moved to RAF Wick in the north of Scotland.

23 May also marked the decision to launch Operation Dynamo and the evacuation of the British Expeditionary Force from the Channel ports. Efforts beginning the evacuation began on 26 May, but not before Boulogne had surrendered and the next day Calais also fell. Kenley’s contribution to Operation Dynamo came from 17 and 64 Squadrons, despite the latter being relative novices on their Spitfires. Although also at Kenley, 615 Squadron were recuperating from their spell in France and did not conduct operations until after Operation Dynamo was closed down.

On 5 June, the Germans launched “Case Red” their attack deeper into France, after initially meeting stouter resistance from French ground forces, they succeeded in breaking through. 9 June saw the effective collapse of the French Air Force, the next day Paris was declared an Open City. The 51st Highland Division was forced to surrender at St Valery-en-Caux on 12 June, after evacuation attempts were thwarted by the weather and Paris fell on 13 June. By 18 June Cherbourg had also been captured. Between 15 and 25 June Britain launched Operations Ariel and Cycle, evacuations of forces from western France.

To increase the patrol time over the Continent, 11 Group practise was to send squadrons from their home station to one on the coast. Those at Kenley initially deployed to Hawkinge and Manston each morning to operate during the day before returning home at dusk, sometime even refuelling in France; after the end of Operation Dynamo RAF Tangmere was also used as a forward operating location. This enabled the bulk of the flying time to be spent over France, increasingly important as the situation deteriorated and British and allied forces fell back on the Channel ports.

Fighter Command ensured its squadrons were well trained in fighter tactics and attacks, but these were predicated on meeting unaccompanied bombers not the mixed formations found over Boulogne, Calais and Dunkirk. As the Kenley squadrons found, even the bombers had a bite, and they quickly had to adopt tactics to counter the Me.110s and Bf.109s they encountered over the near Continent.

Air combat reached its peak during Operation Dynamo, when Kenley squadrons lost seven pilots killed, with 64 Squadron losing three pilots on 29 May including their Squadron Leader, Eric Rogers. This was the second occasion when a Kenley squadron suffered three losses in a day, 253 Squadron had suffered a similar fate on 19 May, but it would not be the last; 17 Squadron suffered  similar fate on 6 June, also losing their Squadron Leader, Geoffrey Emms. Overall, during the Battle of France, Squadrons based at Kenley suffered 15 aircrew fatalities in the 47 days of the campaign compared to 36 in the 114 days of the Battle of Britain. The experience of 17 Squadron was comparable to that of 616 Squadron in the Battle of Britain, when they lost six pilots in 16 days. However, unlike 616 Squadron, their reward was to be sent to France on 9 June to cover the continuing retreat. By 15 June they were in Brittany and made their way back to Debden via Jersey, Guernsey and Tangmere on 19 June.

The Battle of France is frequently overshadowed by the Battle of Britain in terms of RAF contribution, with Fighter Command being criticised for its apparent lack of commitment to the fighting on the Continent and in particular the provision of air cover for Operation Dynamo. However, the evidence of the experience of RAF Kenley is that this was not the case. Although Dowding had his eyes on the bigger picture, beyond the Battle of France, he did what he could to provide fighter cover to the British forces on the Continent, at  time when Fighter Command was having to adjust to new tactics as it faced escorted bomber formations.