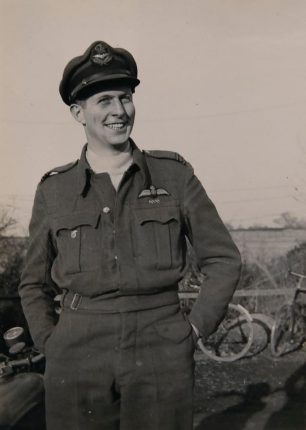 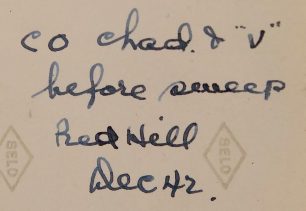 The reverse of the photo of Chadburn shown above.
F/Lt.Edward Lefferts 'Doc' Thorne

On 1st May, 1943, 403 Squadron’s diarist noted the arrival at Kenley of one of the RCAF’s great personalities..soon to become one of their most inspiring Wing Leaders.

Lloyd Vernon “Chad” Chadburn was born on the 21st August, 1919, in Montreal, Quebec, but grew up in Oshawa, Ontario and Aurora.

He applied to enlist in both the Army and Navy, in 1939, but was turned down. The RCAF accepted him as an Air Gunner in April 1940, but he re-mustered as a pilot, graduating from No.2 Flying Training School in Ottawa, on the 9th October 1940, as a Pilot Officer.

Lloyd was posted to the UK in 1941 and swiftly rose up the ranks to become the first graduate of the British Commonwealth Air Training Plan to take command of a Fighter Command squadron when he took the reins at 416 squadron. At 21 years old, he was also the youngest Squadron Leader in the RCAF.

Chadburn claimed his first victories covering Canadian and Allied troops during the Dieppe raid, on the 19th August, 1942. Shortly afterwards, he was awarded the DFC.

After a period of leave spent in Canada, he was back in England with 402 and then 403 squadrons, prior to his promotion to Wing Commander, when he took over the RAF Digby Wing in June 1943.

Chadburn was a gifted pilot and leader even though he was scarcely older than those under his command. He had the ability to inspire confidence while remaining approachable and had a wicked sense of humour, which he used to good effect in his operational briefings.

In his company laughter abounded. Chad instilled confidence in all who flew with him. He was an excellent pilot and marksman and superb Wing Leader. Steady and cool, he gave his orders calmly and nearly always with some quip that made you smile and relax.

Many of the pilots who served under him recall his uncanny navigation skills.

Chad always seemed to know where he was geographically and on numerous occasions when returning from an operation short of fuel and full of concern for our whereabouts, Chad would unerringly lead us down through several thousand feet of cloud almost on top of our strip.

He could take you through your girlfriend’s back door from any point in England.

Chadburn was dubbed “The Angel” for successfully escorting American bombers, and those of No.2 Group, RAF, on their sorties. During this period, he received the DSO twice, the first RCAF officer to be so decorated and one of only four in history. After a War Bond drive in Canada, he returned to Europe as wing commander of Number 127 Wing RCAF, comprising 403, 421 and 416 Squadrons.

On the 13th June 1944, Chadburn was leading a patrol at 17.30hrs in the Cherbourg/Caen area, flying at 12,000ft. 421 squadron were returning from a patrol at the same height, at cloud base, and the two squadrons flew into each other head-on. Violent evasive action was taken by both formations but unfortunately Chadburn and Flight Lieutenant Frank Joel Clark collided and both men were killed in the ensuing crashes.

Frank had been with 421 squadron since October 1943, joining the squadron not long after they arrived at Kenley. He was 23 years old and married to Ida June Clark. The couple had a 21 month old son, Barry Joel Clark. Flight Lieutenant Clark is buried in Bretteville-Sur-Laize Canadian War Cemetery, Calvados, France.

Lloyd Chadburn never married but, according to his biographer Robert Forbes, his girlfriend, a WAAF named Nancy MacKay, gave birth to a son, Ian Nicholas MacKay, in September 1944, who was adopted and renamed Andrew Cockshott. He met some of his Father’s comrades at a 416 squadron reunion in 1992.

Chadburn is one of only three RCAF officers to become a Knight of the French Legion d’honneur and also received the Croix de Guerre avec Palme. He is buried in Ranville War Cemetery, Calvados, France. Grave reference: V.F.2.