You are here: Home>History>Timeline of RAF Kenley>World War II>Flying Officer Albert "Dickie" Ball of No.3 Squadron 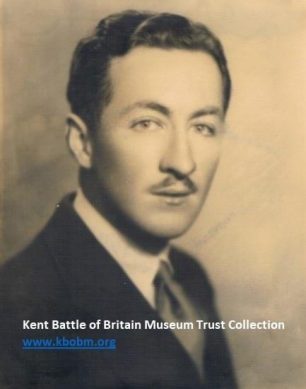 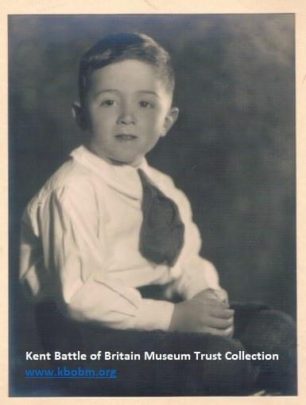 Albert Ball as a child
Kent Battle of Britain Museum 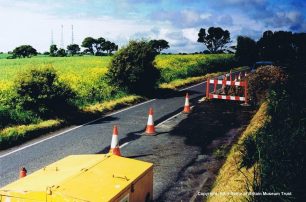 The excavation underway in Dover Road, Westcliff, near Dover of the Hurricane, Serial No. N2333, of No.3 Squadron and flown by F/O 'Dickie' Ball. The three towers of the former Dover RDF Station can be seen in the back ground.
Kent Battle of Britain Museum 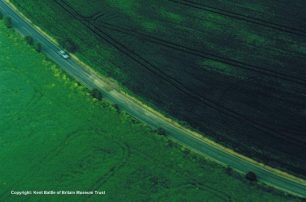 On 10th May 1940, Germany attacked the Low Countries and what became known as ‘The Blitzkrieg’ was on. That morning No.3 Squadron’s pilots were at their base at RAF Kenley. The day was bright and clear although the early morning peace had been disturbed when a section of Hurricanes had been scrambled to investigate an unidentified aircraft approaching the coast.

On returning to base after a fruitless chase the pilots were greeted by the news that the expected German assault on the Low Countries had started and that they would be departing immediately to France. Squadron Leader ‘Pat’ Gifford DFC, gave the squadron a sketchy pep talk, the pilots hastily packed their kit and shortly after lunch, took off for France. Only a few maps were available and these were allocated to the senior pilots. The Squadron landed at Merville and shortly afterwards, were joined by No.79 Squadron from RAF Biggin Hill.

At about 19.30 hours, No.3 Squadron were airborne when, near Lille, they sighted 20 to 25 Heinkel He 111P’s (believed to be from III/KG 54 and which were already under attack by No. 85 and 607 Squadrons) at approximately 7,000 feet. Flying Officer Albert ‘Dickie’ Ball in Hurricane, Serial number L1901, shared in the destruction of a Heinkel with Pilot Officer Frank Carey DFM.

F/O Ball wrote in his combat report; ‘Blue 1 (Ball) attacked No.2 of enemy vic formation. Blue 2 (Carey) attacked No.3. Black smoke issued from both these aircraft and No.3’s wheels went down. Air gunner of No.2 – when I attacked – ceased firing shortly after I opened fire.’

P/O Carey wrote in his; ‘E/a seen almost immediately after take-off and chase. E/a flying in open vic formation at approximately 7,000 feet and climbing. E/a constantly changing direction and full use of this was made by Blue Section cutting corners. E/a eventually attacked at 15,000 feet and fire opened at 300 yards, using 20˚deflection. Blue 1 (Ball) and 2 (Carey) concentrated on attacking wing aircraft and attack continued by Blue 2 until engines were very badly damaged and emitting clouds of smoke, with e/a losing height. Blue 2 immediately returned to base owing to failing light. Possibly two e/a shot down (one by Ball).’

F/O Ball and P/O Carey were each credited with a Heinkel shot down.

This is where the story gets slightly confusing. For many years it has been our belief that unable to make Radio contact or find Merville airfield in the dark, F/O Ball set course for Dover to try and locate RAF Hawkinge. He was unable to locate it due to the darkness and blackout, and running low on fuel, he was forced to bale out over St. Margaret’s Bay, within sight of the Dover RDF Station. His Hurricane, Serial No. N2333, smashed into the Dover Road, Westcliff, St. Margaret’s Bay (the spot from which we excavated it’s remains sixty-nine years later). Unhurt, F/O ‘Dickie’ Ball was taken back to RAF Kenley in a Miles Magister from RAF Hawkinge and returned the following day to Merville with a replacement Hurricane.

However, recent research has suggested in actual fact that F/O Ball found that the undercarriage of his Hurricane Mk. I, Serial No. N2333 and coded QO-C) was jammed after attacking the Heinkel’s over Lille. He was ordered up to 6,000 feet in the dark by Squadron Leader Patrick ‘Pat’ Gifford while heading for Dover and bailed out at 22.30 hours landing near a searchlight post at St. Margaret’s Bay. He had been warned by his C.O. not to lose the parachute ‘D’ ring, which if he did would incur a 5 shilling fine for its replacement!

Over the R/T, he was heard to call for help when he was attacked by five Messerschmitt Bf 109E’s (believed to be from 1/JG 21). Seriously wounded in the thigh, he crash-landed his badly damaged aircraft between Louvain and Wavre at 13.30 hours and was captured. He sadly succumbed to his wounds whilst a prisoner of war on 4th June 1940. Albert Ransome Ball, son of Sidney Hastrell and Isabel Gilman Ball, of Montreal Province of Quebec, Canada, was twenty-five years old and is buried in plot 28.E.13 in the Reichswald Forest War Cemetery in Germany (about five kilometres south-west of Kleve).

On 2nd June 1999, the Kent Battle of Britain Museum at Hawkinge were contacted by Barbara Moody, Senior Engineer (Highways) of Dover District Council, regarding the possibility of a Second World War aircraft being buried under Dover Road (B2058), Westcliff, near Dover. The road had been ‘humping’ and had been initially investigated Dover District Councils ‘Contract Services’ whilst carrying out road repairs in the area. The reason for the ‘humping’ of the road was believed to be the corrosion of the aircraft wreckage expanding and pushing the road upwards.

We were aware of a Hawker Hurricane Mk. I, Serial No. N2333, of No.3 Squadron crashing in that vicinity on 10th May 1940 –  quite a rarity, as it was a veteran of the Battle of France and was lost on the first day of the German attack on the Low Countries.

On the evening of 2nd June 1999, the Museums Chairman and Historian, Dave Brocklehurst MBE, visited the crash-site, confirmed that it was in fact the remains of an early-built Hawker Hurricane and concluded, on that evidence backed up with 1940 crash-reports, that it was the location where ‘N2333’ had impacted with earth.

Barbara Moody, on behalf of Dover District Council, kindly gave us a window of opportunity to investigate the location further, as long as all work had been completed by Sunday night, 6th June 1999. Luckily the carriageway was already closed and under traffic light control which would make further exploration viable as long as we could gain the necessary licence under the ‘Protection of Military Remains Act 1986’.

The next morning Dave made contact with Dee Sheldon of the Royal Air Force Personnel Management Agency, seeking an emergency licence. With faxes being fired off in all directions between Dave, Dover District Council and the RAF, an emergency licence was granted (PMA/133159/2/1/CS1b1) the following day (4th June) and subject to any excavation being carried out over the weekend of 5th and 6th June 1999!

Luckily, at this time Dave was a senior manager of a local civil engineering company which gave him access to a JCB, driver and all the necessary road permits to work within the public highway to pacify the local authority. A JCB and a driver (the one and only Tom Page) was made available from a contract in Dover Harbour Board, being only a short distance away from the crash-site.

On the evening of the 4th June, Dave visited the crash-site with another ‘aircraft digger’ who had happened to be visiting the Museum and also happened to be carrying a deep penetration metal detector (Forster). On setting up the detector, Dave was told exactly where the ‘Browning machine guns’ were located and that the ‘digger’ requested one in exchange for the information! The following day when we dug down at this location it turned out to be the 30,000 volt mains cable to St. Margaret’s Bay! If we had cut through this with the excavator all of us would have been turned into ash within a split second!!

The excavation was carried out on Saturday 5th June 1999. Sadly, very little of the aircraft was unearthed, but it was sufficient to create a lasting memorial to the pilot, Flying Officer Albert R. Ball, within the Museum. By six feet down, virgin subsoil had been reached and the excavation was abandoned. It would appear that having crashed into the road, the wrecked Hurricane was accessible for wartime recovery vehicles and at a depth they could easily reach. As it crashed in May 1940, still out of range of Luftwaffe fighters, it would also have been safe from aerial attack for a recovery team.

You can find out more about the Kent Battle of Britain Museum and their unparalleled collection, here.