You are here: Home>History>Local Places and Incidents>The 35 Club, Old Coulsdon 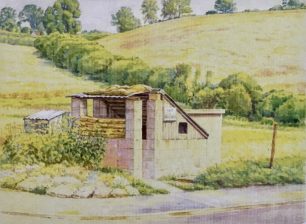 Cecil Glenn Barber, who was a commercial artist, executed this painting of Wardens Post No.35 from his front garden at 202 Chaldon Way.
The History of The 35 Club by Margaret Davison 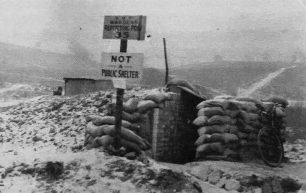 The outside of No.35 Wardens Post.
The History of The 35 Club by Margaret Davison The interior of Wardens Post No.35.
The History of The 35 Club by Margaret Davison Wardens Post No.35 listed in the Coulsdon and Purley A.R.P. Handbook, giving the address as Marden Way, which didn't exist! 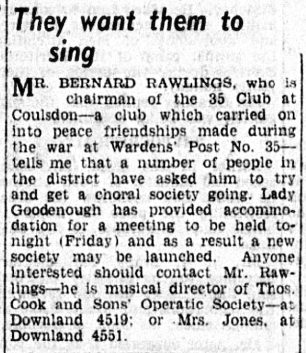 A coach trip to Bracklesham Bay in 1956. A card school was arranged on the lower deck of the coach as the seats were arranged around a table seating four people.
The History of The 35 Club by Margaret Davison The Club's Christmas party in 1957, held at the Co-op Hall Woodcote Grove Rd, Coulsdon.
The History of The 35 Club by Margaret Davison

In September 2022, I had the privilege of being invited to give a talk about RAF Kenley to ‘The 35 Club’ in Old Coulsdon and was delighted to discover that this wonderful social club has a long and distinguished history…

The Club was formed in 1946 and takes its name from Air Raid Wardens Reporting Post No.35, which was situated on the left hand side of Chaldon Way, between Nos. 145 and 147. Prior to the outbreak of war, the land was due to be developed into a new road, Marden Way, but hostilities put a stop to the project. After the war, Post No.35 was demolished, houses filled the gap in Chaldon Way and all thoughts of developing the proposed Marden Way, disappeared. The land was open fields that, in the course of time, became woodland which was bought by the City of London in 2004.

On 15th October, 1945, a meeting was held to discuss the formation of a social club for the ex-Wardens and Fire Guards of Post 35, as well as their families and any other residents they nominate, subject to the committee’s approval. The aim was:

“to perpetuate the comradeship built up during the war and to provide social, recreational and educational facilities for its members.”

Several of the other Wardens Posts in the area were also starting clubs, though we are unaware that any of those have survived.

Soon The 35 Club committee was planning a social programme for its members and had booked the Scouts’ Hut, near Coulsdon South Station, for the first Wednesday of every month.

One of their earliest events was a Christmas party for about 40 children of the former wardens of Post 35, held at Fairdene School. There was “a sumptuous repast” followed by party games, a film and a magician. Each child also received a present.

During 1947 the club’s summer programme consisted of four Putting competitions, two tennis tournaments, a Scavenger hunt in Grange Park, three rounders  matches, a Ladies vs. Gents cricket match on Farthing Downs (which was interrupted by a horse!), one ramble and a childrens’ party. Membership had now risen to 54.

Whist drives soon became a popular feature of the Club’s activities, and by 1950, there were trips to the theatre and seaside, quizzes and visits from an Operatic Group.

In August, 1995, the Club celebrated its fiftieth anniversary. To commemorate the occasion, a seat was placed on Bradmore Green, and dedicated by the Rev. Neville Biden, Rector of St. John’s Church, Old Coulsdon.

Sadly, all of the original club members have passed away, but I’m sure they would be gratified to find the spirit of comradeship, that they sought to preserve, still alive and well among the current membership, 76 years later.