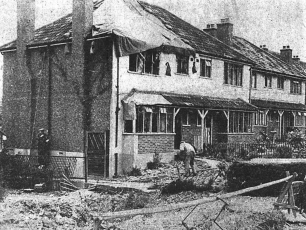 Newspaper clipping showing damage to houses caused by the crash of the No.109 Squadron Mosquito (ML962).
Coulsdon History Facebook Group 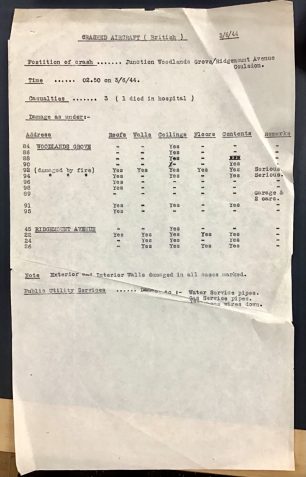 The casualties and damage caused by the crash of Mosquito ML962 recorded in Coulsdon & Purley UDC Air Raid Messages.
Museum of Croydon

On the night of 2/3rd June in 1944, a terrible tragedy befell a Coulsdon family:

“CRASHED IN FLAMES ON HOUSES.”

“A NIGHT fighter crashed in flames early this morning at the corner of Ridgemount-avenue and Woodlands-grove, Coulsdon, Surrey, and severely damaged a number of houses. Mr. and Mrs. Roote and their 18-months-old baby boy, who were asleep, were injured and taken to Purley Hospital, where the baby died. The aircraft hit the front garden of a house in Ridgemount-avenue and was smashed to pieces. A hole was made by the aircraft about 20 feet across and 10 feet deep.”

“The blazing petrol tank came adrift and fell through the roof of a house in Woodlands-grove, but the N.F.S. extinguished the flames before they spread to other houses. The crew of the aircraft, two Canadians, baled out safely.”

They had taken off at 23.20pm on the 2nd June, 1944, from Little Staughton, bound for the synthetic oil plant at Leverkusen, north of Cologne. The Mosquito was equipped with a new magnetron valve used in conjunction with their ‘Oboe’ equipment – an improvement which revolutionised the tactics of night bombing. Despite the new equipment and unfamiliar target, everything went to plan until they got close to the German border and were hit by flak. As they approached the target, they expected to find it lit up but it seemed that the markers dropped by the first Mosquitos had failed. It was now vital that they dropped their green target indicators accurately for the Light Night Force bombers that were coming in after them. Carter was already struggling with the port engine when there was a huge bang – the aircraft had been hit again! They dropped their target indicators and another explosion jolted the Mosquito, severing the aileron and elevator controls. With the port engine in flames, Carter managed to regain control of the aircraft and escape the searchlights that had ‘caught’ them over the target. The engine fire had burnt itself out but had spread to part of the wing – Garrett managed to get it under control but the side of the cockpit was too hot to touch.

They limped towards Belgium above the clouds and guessed that they had reached Calais when the coastal flak began, but continued  towards Dieppe before turning north, staying over land to make the risky Channel crossing at the shortest point. After crossing the Sussex coast and a near miss from ‘friendly’ anti-aircraft fire, they called on the emergency channel to establish their exact location and were given a course to steer.

As they approached the outskirts of Surrey, fire had broken out again. Despite Carter’s best efforts, it was clear that the Mosquito was too unstable for him to attempt a landing and their only chance was to bale out through the floor hatch. Carter kept the aircraft steady while Garrett baled out, but he became stuck in the hatch and Carter had to put his foot on Garrett’s head and push him out, ‘like a cork from a bottle!’

Carter knew the Mosquito would go into a dive as soon as he released the controls, but managed to get free in time – the impact of the parachute opening was like ‘being thrown against a brick wall.’ He landed in a field where he was approached by a soldier on guard duty and marched at gunpoint to his Headquarters. He had landed in the midst of a sealed military unit awaiting instructions to leave for D-Day! A phone call to Little Staughton confirmed Carter’s identity and he was eventually released.

Ernie Garrett had floated down onto the roof of Caterham Town Hall. Luckily his parachute got caught on a chimney, saving him from falling, but he was stuck! It was 3am and his cries for help were answered with calls to, ‘Shut up!’ Eventually, he broke a window and made his way to the ground floor where some Fire Watchers were on duty. After phoning his squadron, Garrett was taken to RAF Kenley, where he was re-united with Carter. The pair were picked up by a Lancaster on the afternoon of 3rd June, and flown back to Little Staughton.

After a period of leave, Carter and Garrett returned to operations on 21st June – the day they were both awarded the DFC. They flew a further 19 ‘trips’ together and completed their tour of operations in mid-August, 1944. Both men survived the war.

The occupants of the houses hit by the stricken Mosquito weren’t so lucky.
Mr. Robert Roote, an aircraft worker and his wife Mrs. L. W. Roote, of 35 Warwick Rd, Coulsdon, were badly burned when one of the Mosquito’s engines tore through the roof and into the bedroom where they were sleeping with the baby. They were rushed to Purley Hospital with their 12 month old son, Alan, who died later of his injuries. His four brothers and sisters escaped unharmed.  The N.F.S., soldiers and neighbours worked for several hours to remove furniture and valuables from the damaged houses. The only other casualty was a warden – Mr. A. E. Playle, who cut his knee badly while tackling a fire in his home.

Alan Roote’s short life is commemorated on the Civilian War Dead Roll of Honour, located near St. George’s Chapel in Westminster. It is likely that his remains were interred in the mass grave at Mitcham Rd cemetery.

This is very interesting to me as Mr & Mrs Root ( no e ) were my Uncle and Aunt. Robert ( Bob ) was my Father’s brother, and my favourite Uncle. I used to visit them in Ridgemount Ave as a child. Bob was the electrician at the old Orchid Ballroom and would often take me there when he was working. This tragic accident happened one month after I was born. R.I.P. Allan. 🙏