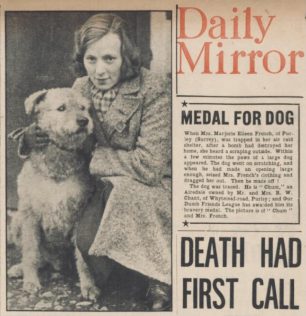 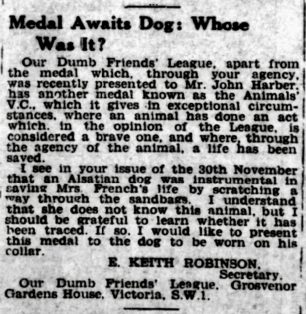 The letter from the secretary of 'Our Dumb Friends' League' appealing for information about the canine rescuer.
Croydon Times and Surrey County Mail, 14/12/1940 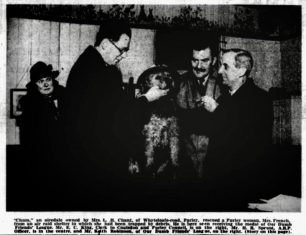 On the evening of 27th November, 1940, Mrs. Marjorie French sat alone in the air raid shelter at her home in Glenn Avenue, Purley. Warmed by an electric fire she was awaiting the return of her husband, John, a toolmaker by trade. As she listened for the sound of his car, the drone of an aircraft caught her attention…and then a bomb dropped.

“The explosion did not seem to me to be loud but immediately afterwards there was a terrific din as slates and brickwork fell in all directions,” Marjorie later explained. “The entrance to the shelter was blocked and I could not get out. To make matters worse a gas main had been burst and I could smell the fumes. I thought that I might well be killed by the gas when there was a scratching at the entrance and I saw the paws of a dog digging away. The animal, I have never seen him before to my knowledge and I don’t know to whom he belongs, cleared a way for me to get out.”

As she hurried to safety, the dog persistently jumped up at her, barking and blocking her path. In the darkness, she hadn’t realised that she was dangerously near the edge of the bomb crater, which had blocked the road, and the dog had effectively prevented her from falling in.

Marjorie joined her friends in the street and her canine rescuer made off into the night. It was only some time later that she realised the rescue workers digging in the debris were, in fact, looking for her, unaware that she had already been brought to safety by more unorthodox means.

The story of Marjorie’s canine rescuer appeared in the Croydon Times on 30th November, 1940, and attracted the attention of Mr. E. Keith Robinson, secretary of ‘Our Dumb Friends League,’ (dumb in this case referring to the animals’ inability to speak, rather than a lack of intelligence). He wrote to the paper appealing for help in tracing the dog, and received this reply from Mr. Robert William Chant, a Great War veteran:

“Re: Your letter published in the “Croydon Times” under the heading ‘Medal Awaits Dog,’ I am pleased to inform you that the dog was my wife’s. “Chum” is an airedale dog. He is always keen on going out during a raid. The incident mentioned by you can be vouched for by Mrs. French, also by the A.R.P. wardens at the Christ Church Post, Purley. The dog’s identity disc, issued by the League, was found among the debris of Mrs. French’s shelter. Thanking you for the interest you have taken in this matter.”

In early January, 1941, Mr. Keith Robinson presented 12-year-old “Chum” with the ‘Animal VC’ at Christ Church Hall, Purley. Mr. R. C. King, Clerk to Coulsdon and Purley Council , who presided, said that in their area they had a large number of names on their register of civil defence volunteers, but that afternoon they were giving honour to one whose name was not included on that list.

After a night when twelve houses in the area had been wrecked and nearly a hundred damaged, the story of Chum’s instinctive gallantry must have been a tonic to the spirits of the local people. In saving Marjorie French, he earned himself a well-deserved place among the Second World War’s four-legged heroes.

Nb. The 1939 Register for England and Wales shows Mr. Robert William Chant, a  62-year-old mechanic, and his wife, Lilian (58) living at 224 Brighton Rd, roughly 25 minutes walk from the French’s home in Glenn Avenue. However, we cannot be certain that they were still living there in November 1940, as many of the local houses had already been damaged by previous raids and some families would undoubtedly have been displaced. One newspaper reports gives their address as ‘Whyteleaf Road, Purley,’ but, although the similar-sounding Whytecliffe Rd is very close to Glenn Avenue (where the French’s lived), Whyteleafe Rd is in Caterham, near to RAF Kenley, which is what prompted me to research this story initially.
Sources:
Croydon and Surrey County Mail 11/1/1941
West Sussex Gazette and South of England Advertiser 2/1/1941
Croydon Times and Surrey County Mail 30/9/1940
Croydon Times and Surrey County Mail Saturday 28/12/1940
Daily Mirror 30/12/1940
Croydon Times Saturday 4/1/41
UK British Army Service Records 1914-1920
1939 England and Wales Register