You are here: Home>History>Local Places and Incidents>Canada Hall, South Merstham 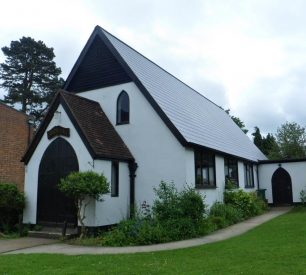 In the Spring of 1943,  Canadian sappers began work in South Merstham, rebuilding All Saint’s Church, which had been completely destroyed when a parachute mine landed on All Saint’s Green, on 19th April, 1941.

A total of ten people died in the blast, the vicarage and two other houses were also destroyed. The 84-year-old vicar, who had been reading in his study, suffered severe injuries. One of his two sisters was killed and the other, like the vicar himself, was in hospital for several months.

Since mid 1940, a corps of the Royal Canadian Engineers and the 9th Field Ambulance, Royal Canadian Army Medical Corps (RCAMC) had been at Merstham House, parts of Church Hill and were also billeted in nissen huts at Pendell Camp, Warwick Wold.

Serving with the RCAMC was Corporal George Hedley Wolfendale, a priest of the Church of England. At the time of the disaster, and the resulting injuries to the vicar, he took over and saw that life and worship at the church continued.
During 1943, he was attached to the Royal Canadian Engineers as a chaplain but he didn’t forget the parishioners of Merstham and he used his engineering connections to get a new church building constructed for them.

In March 1943, the work began under the watchful eye of Lieutenant Frederick Eaton. All the material used was salvaged from the wreckage of the destroyed church and vicarage. In five weeks the building was completed and on Easter Day 1943 the ‘new’ church, was dedicated for worship by the Bishop of Southwark. Worship continued there until the new All Saints Church was completed on 19th April 1950, exactly seven years later.

The little church built by the Canadian sappers continues to exist as Canada Hall, named in memory of it’s origins and as a reminder to the fact that thousands of Canadian servicemen and women made their temporary homes in Surrey during the war years.

In 2014 the foundations were laid for a new building which would link Canada Hall and the church. The Link, as it has become known, provides a common reception area for both the church and the hall as well as a fully equipped kitchen, a meeting room known as the Wolfendale Room and toilet facilities all with easy level access. At the rear of the Link is a grassed secure children’s play area.