A Double Funeral for Redhill's Canadians 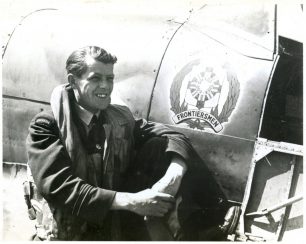 F/Lt Thomas Karl Ibbotson. This photo was found affixed to the flying logbook of his brother, Donald Alleyne Ibbotson, who served with 202 Squadron in Gibraltar and Ireland.
JMV 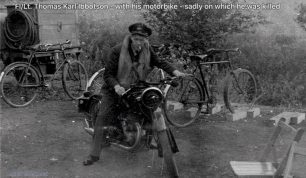 F/Lt. Ibbotson riding the motorcycle on which he lost his life.
Francois Dutil via Aircrewremembered 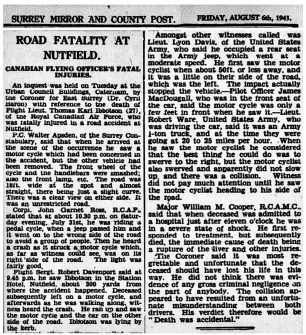 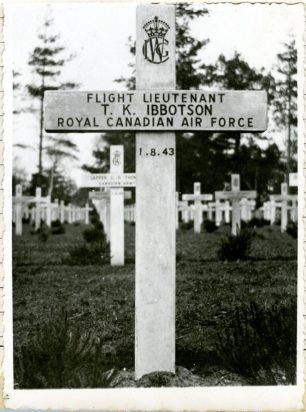 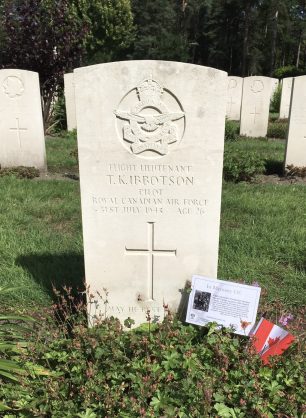 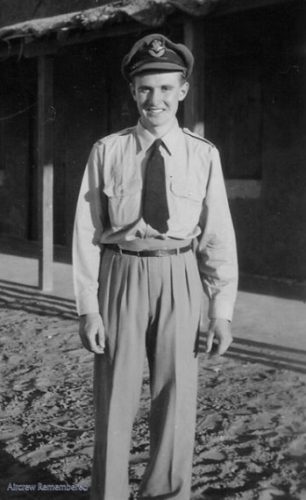 F/O Delbridge taken outside the camp in Sudan in July 1942.
Wanda Robinson via Aircrewremembered 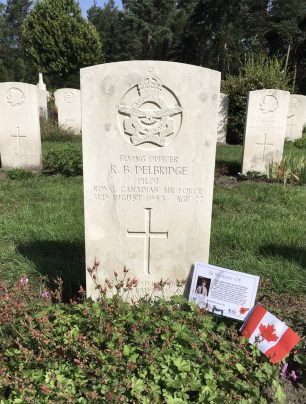 401 squadron RCAF were stationed at RAF Redhill at the end of July 1943, when they lost two pilots in unrelated accidents only a couple of days apart.

On the night of Saturday, 31st July, 1943, Flight Lieutenant Thomas Karl Ibbotson took a bend too wide on his motorbike and collided with a jeep belonging to two Americans attached to the squadron. The accident happened between Nutfield Ridge and RAF Redhill. He was removed to No.14 Canadian General Hospital and admitted at 23.05pm. Despite emergency surgery, he died of internal injuries at 3.45am on 1st August.

At 11.35am on 3rd August 1943, Flying Officer Ralph Balkwill Delbridge was flying Spitfire VB (BL339, YO*M) on a day training flight  North-West of Reigate. Witnesses reported that he made two low runs over the fields at about 250ft, turning and diving in and out of the valley between passes, before coming round again fast, at a height of 50-60ft. He rolled over into an inverted position, turning to the right and struck the ground. The aircraft disintegrated on impact and debris was spread over an area of about 75 yards at Underhill Farm, Buckland. Delbridge was killed instantly. He was 22 years old.  Local researcher, Colin Lee, corresponded with a resident who remembered the incident and said that a woman ran up the hill towards the crash with whiskey for the pilot but met a man coming the other way who said, “He won’t be needing that” – testament to the devastating crash that had taken Delbridge’s life.

All inspections had been carried out with due diligence and as the aircraft had been flown earlier that day by another squadron pilot, and found serviceable, it was concluded that pilot error rather than mechanical failure was to blame for the crash. It has been suggested that Ralph knew the occupants of the farm and may have spent some ‘leave’ there.

Recommendations were made to encourage members of the public to report incidents of low flying to the police.

The two unfortunate Canadians were laid to rest with full military honours on 4th August 1943, in a double funeral at Brookwood Military Cemetery, where they lay side by side in graves 45.C.6 and 45.C.5.

Flight Lieutenant Thomas Karl Ibbotson was born on 1st January, 1917, at Onion Lake, Saskatchewan. His Father, Percy John Ibbotson, was from Rickmansworth, England, and worked as a grain buyer. His Mother Alphena Skogg was deceased. He had two brothers, Lieutenant John Rupert Ibbotson, who was serving in the Royal Canadian Engineers and P/O Donald Alleyne Ibbotson who served with 202 squadron in Gibraltar and Ireland.

Prior to joining the RCAF, “Ibby”  had already graduated from the University of Saskatchewan and had been working as a pharmacist for a couple of years. He enlisted at the recruiting office in Regina on 8th August, 1940, and impressed the interviewing officer with his maturity and pleasant manner. He noted that Ibbotson was, “officer calibre,” a “good prospect.”

Thomas continued to make steady progress throughout his training and was praised for his initiative and common sense. He particularly excelled in navigation and instrument flying. He received his wings and was commissioned on 5th August, 1941.

After being sent overseas to England, Thomas spent two months training on Spitfires at No.53 OTU, and then joined No.401 squadron on 9th June 1942.

He brought down a FW190 on 28th August while stationed at Biggin Hill, and was still with 401 when they came to Kenley in September for four months. By all accounts a shy man, Ibby’s death left 401 Squadron, “shocked and saddened.”

Ralph excelled at athletics and was a keen horse-rider and basketball player. After leaving school, he did a ‘Complete Office Course’ and was working as a book-keeper when he enlisted in the RCAF in March, 1941. In his spare time, he built model aeroplanes and had read “a great many instructive books on flying,” although he had only spent one hour in the air as a passenger before he joined the Air Force.

During his training he was keen and determined, making slow but steady progress as a pilot. His instructor at No.9 SFTS noted that he “needed practice in aerobatics.”

Ralph was commissioned and received his ‘wings’ on 19th December, 1941. He was posted overseas and spent most of 1942 serving in the Middle East, before being posted to the UK. He joined Course No.46 at No.57 Operational Training Unit, Hawarden from early March until 6th June, 1943, where he converted to Spitfires. He joined 401 Squadron on 8th May, 1943, for the couple of months before he lost his life in the accident at Underhill Farm.