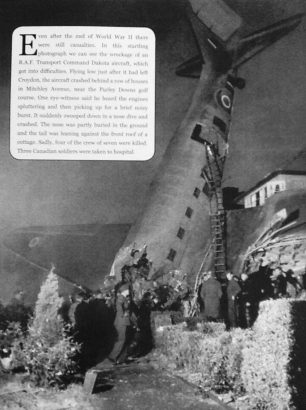 On 19th October, 1945, No.435 squadron, RCAF, had only been at Croydon for a few days when one of their Dakotas (KG439) stalled and dived into the front garden of a house in Mitchley Avenue, Sanderstead, not long after take-off.


Witnesses saw the aircraft flying low towards Kenley, when the engines sputtered to a halt, and surmised that the pilot had attempted to make a forced landing on Purley Downs Golf Course.

Three Canadian crew members were killed instantly, as well as an RAF Sergeant, Frank Moore. One other crew member and two passengers were injured, but survived. Mercifully, there were no civilian casualties. Mrs. Tonkyne, who lived in the house, was out shopping with her neighbours, Mrs. Skinner and Mrs. Thorn. 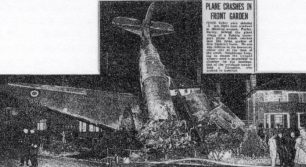 The three Canadians killed were:

Sergeant Frank Edward Moore RAF, also of No. 435 squadron, died on the 20th October and lies at rest in Edmonton Cemetery, Middlesex. Sec. W, Grave 55. His wife was a recently discharged WAAF – they had only been married a year.

Investigations revealed that the fuel selector was positioned on an empty tank at the time of the accident. Other tanks were properly fuelled, so the cause of the crash was probably a failure on the part of the crew to check the fuel selector prior to take-off, leading to fuel starvation.

The crash was the last involving a Services aircraft flying from Croydon and was all the more tragic because the airmen involved were due to return home, as their war service was over.

Flying Officer Gordon Angus McIntyre was born in December 1919, in Marriott, Saskatchewan, Canada. His parents, Robert and Louise were both born in Ontario and had six children – five boys and a girl. 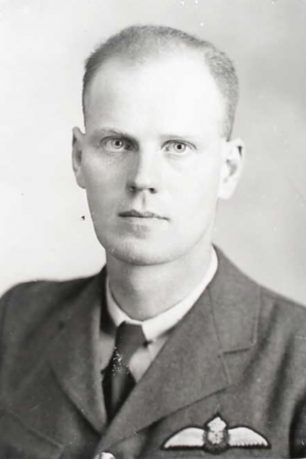 Gordon left school after Grade VIII and completed his High School education by correspondence, working as a farm labourer to buy his school books and clothes. He seems to have had considerable ability as a mechanic and could “overhaul almost any kind of farm machinery,” including tractors and combines. As well as labouring, Gordon worked as a tractor operator.

On 22nd October, 1939, he married Marie (Tremblay?) in Portage-La-Prairie.
Gordon enlisted in the RCAF on 21st November, 1941, despite never having flown in an aircraft, not even as a passenger. (Two of his brothers also joined the service.) He found the classroom work difficult during training but his instructors recognised that he was “bright” and that his problems were largely due to his poor education.

He showed “considerable natural flying ability” and appears to have been retained in Canada as a flying instructor, after he got his wings in June 1942. 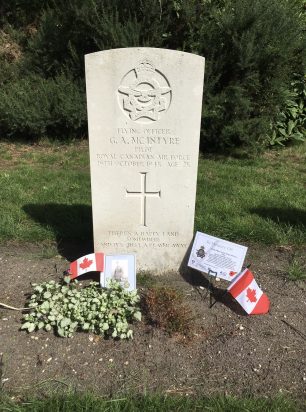 McIntyre wasn’t sent overseas until June 1945 and was only taken on strength by 435 squadron a month before the crash at Mitchley Avenue, which cost him his life. Although he had 1300 hours total flying time, only five of those hours were on Dakotas.

Tragically, on 20th September 1945, Gordon signed a letter forgoing the opportunity for repatriation to Canada and chose to stay with his squadron in England.

Gordon had divorced his wife earlier in 1945, and his will left everything to his Mother, Louise. However, the decree absolute for his divorce was in England and the RCAF wouldn’t release his estate. In October 1946, Louise wrote a letter to the RCAF begging for the situation to be resolved as the McIntyre’s faced considerable hardship due to their crops having completely failed that year. Gordon’s estate did, eventually, go to his Mother.

Flying Officer Frank Harry Seaman was born in South Fort George, British Columbia, Canada, on 17th May, 1915. His parents were Harry Chipman Seaman, who died in 1939, and Ruby Maud McCaffery, who was originally from Kansas. Frank had one brother, William. 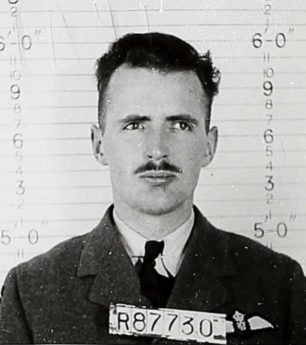 From 1934-1935, he studied Physics, Chemistry, Mathematics, Biology and German Literature at the University of British Columbia, before pursuing a Diploma in Banking. During this time he was also in the Canadian Officers Training Corps. After that, he worked as a Teller and Ledger Keeper at the Bank of Nova Scotia, while also serving in the Seaforth Highlanders of Canada, a Reserve Infantry Regiment. His hobby was target shooting.

Frank enlisted in the RCAF on 10th January, 1941 and was considered an intelligent, well-adjusted older type. Throughout his training he was praised for his diligence and determination, but flying did not come easily to him and he lacked confidence in himself. He did, however, excel at navigation and gained his pilot’s “wings” on 7th October, 1941. A course at the General Reconnaissance School, Charlottetown, followed – Frank made a poor start and found the work difficult but persisted and became a “thoroughly reliable navigator.”

He trained on flying boats at No.13 Squadron, Patricia Bay and from August 1942 until May 1943, served with No.5 Squadron, flying the Supermarine Stranraer and Consolidated PBY (Catalina) on anti-submarine patrols. Frank had 700 hours on this type as a co-pilot, but was involved in two crashes.

In July, he was posted to No.124 Ferry squadron and in October joined No.164 Heavy Transport squadron, who flew Lockheed Lodestars and Douglas Dakotas. In May 1944, Frank joined No.1 Photo Reconnaissance Flight at Rockcliffe. 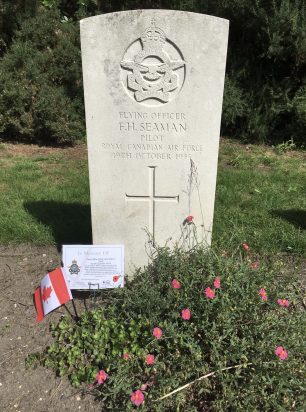 After spending the early part of 1945 at No.6 Operational Training Unit, Frank was sent overseas to England and disembarked on 20th June. It’s not clear when he joined No.435 Transport Squadron, but it can’t have been more than a couple of months before the fateful crash of KG439 on 19th October – 10 days before the first birthday of his baby daughter.

Flying Officer Earl Joseph Shaw was born in Mount Forest, Ontario, in 1912. He came from a large farming family – the oldest of four sons and four daughters born to Francis Wilfred Shaw and his wife Marion Monica Coffee. 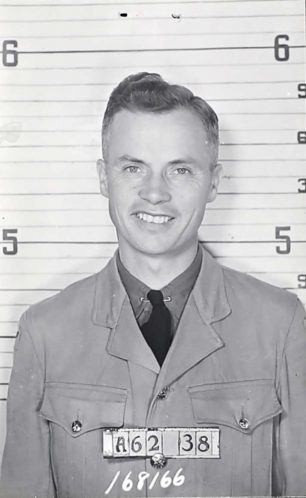 Until 1940, he worked for his Father, probably on the farm, giving his trade as “mechanic”, but in 1936 he studied Aeronautics at Calgary Tech for a year and then did a correspondence course in Radio Service and Repair. He obviously had his heart set on a career in aviation and went to work as a fitter at Fleet Aircraft Ltd. in Fort Eyrie, in 1940. In February the following year, Earl married Garnette June Sims Letourneau in Calgary.

Earl enlisted in the RCAF in June 1942 and hoped that when his service was over he would be able to do a University Degree in Aeronautical Engineering. His talent for mathematics led him to be selected for training as a Navigator. He began his Initial training in October 1942, and his instructors found him “intelligent and ambitious”. He came eighth out of the 122 students on the course. Earl completed his training as a Navigator and was appointed to a commission on 11th June, 1943.

More training followed at No.1 Central Navigation School, Rivers, and then a posting as an Instructor to No.1 Air Observers School, Malton. He enrolled on a course for Staff Navigators in early 1944 and his work was found to be “methodical and painstaking”. Shortly after that, Earl and Garnette adopted a one year old girl, Mary Anne. 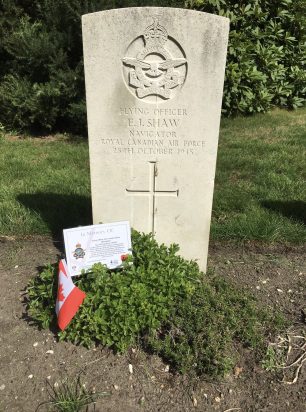 Flying Officer Shaw was posted overseas and arrived in the UK on 12th June, 1945. He was sent to No.17 Air Crew Holding Unit at RAF Snaith and then attached to RAF Down Ampney on 26th August, where No.435 Transport Squadron were based. They moved to RAF Croydon on 9th October, only 10 days before the crash at Mitchley Avenue.