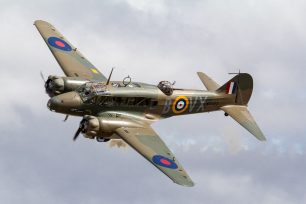 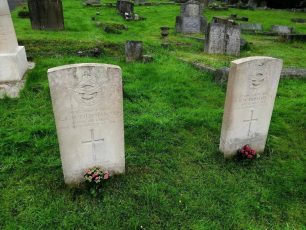 The graves of W/Cdr Chapman and F/Lt. Priestly in Caterham and Warlingham Burial Ground.
Julie Starmer 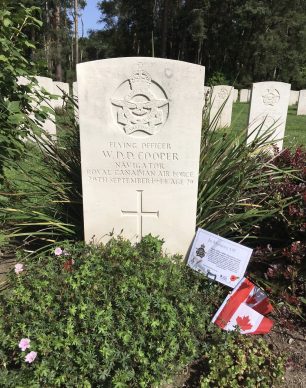 On 29th September, 1944, five men perished in Avro Anson NK607, as it hit a tree in thick cloud and crashed in woods, somewhere within the grounds of an Army Ordnance Depot, near Dean Lane, Merstham, about three miles from RAF Kenley.

After taking off from RAF Northolt at 9.40am, the aircraft was “heard apparently circling over the neighbourhood of Merstham… It then broke cloud at a very low altitude over wooded country and was seen to be banked almost vertically to the left. It crashed almost immediately afterwards but, before it did, the tip of the port wing broke away.”

The five men who died were:

W/Cdr. ROWLAND BRANSTON COX. RAFO. Aged 31. (Pilot)
Commanding officer of 34WSU at the time of his death.
Cox joined the RAF in January 1936. In 1937-38 took part in the Waziristan (North West Frontier) campaign. In 1940-42 served in Wavell`s first Libyan campaign, the early part of Auchinleck`s Libyan campaign, and the Eritrean campaign. After a period with Coastal Command, he was attached to the Canadian First Army in Britain as Air Liaison Officer with the rank of Acting Group Captain.
Son of Norman Simpson Cox and Margaret Heaton Cox, husband of Rose Anne Cox, of Newport, England.
Buried in Newport Churchyard, Essex (St. Mary).

Avro Anson NK607 was with 34 WSU (Wing Support Unit), based at Northolt. The unit had been formed on the 26th July, 1944, to provide transport for 34 Wing – four squadrons involved in photographic and strategic reconnaissance. In the aftermath of D-Day, 34WSU remained at Northolt when their Wing moved to the Continent at the beginning of September. Around the 26th-28th September, the Wing moved from B.48 Airfield (Amiens/Glisy) to B.58 Airfield (Melsbroek).

So, NK607’s flight on the 29th September was most likely to ferry those on board to their new base or a conference , which accounts for the high ranking personnel on board. It must have been a big blow to the Wing to lose two Commanding Officers when they were working at full stretch. The big mystery is why the Anson was flying so low in such poor weather, which seems to have been a sensitive subject in the accident report.

The aircraft was being flown by W/C Cox, who had flown comparatively infrequently, prior to the crash, probably due to more pressing responsibilities. He was probably trying to get some flying time in. The crash investigation, which had initially concentrated on structural failure, tried to ascertain how many hours he had flown but were unable to consult his logbook (he probably had it with him during the crash). During 1942, they could only find records amounting to 25 hours flying time. The movement records since he had taken command of 34WSU, on 9/8/44, indicated roughly 2 hours flying time. The investigators concluded that, although the cause of the crash couldn’t be definitely established, the most likely scenario was was that the pilot had lost control of the aircraft in cloud due to illness or lack of competence in instrument flying.

An improvised memorial now marks the location of the crash.