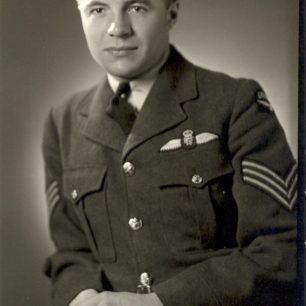 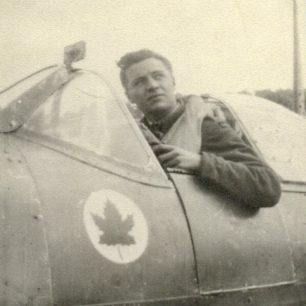 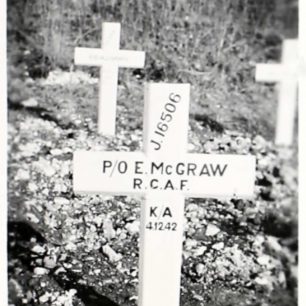 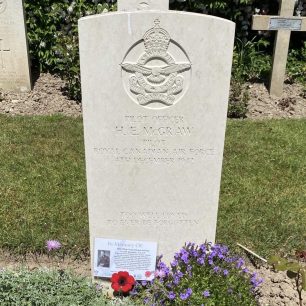 The grave of P/O McGraw. May 2022.
Jane Collman Williams 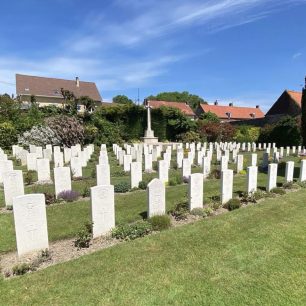 They rendezvoused over Kenley and had reached 12,000ft by the time they crossed the English coast at Dungeness, turning south and flying parallel to the French coast to gain more height, with time in hand. Enemy aircraft were reported inland so they turned south of Boulogne, at 25,000ft and climbed towards Audruicq. They had reached 28,000ft when they were ‘bounced’ and 401’s sections broke formation to take evasive action. Both squadrons were hampered by poor visibility caused by frost on their windscreens. As 401 attacked the enemy aircraft, W/Cdr. Fee ordered 402 to cover their withdrawal over Boulogne at 32,000ft. Sgts. Honeycombe and McGraw were missing after this sortie. In return, Pilot Officer N. A. Keene claimed a victory and Flying Officer H. A. Simpson damaged one enemy aircraft and probably destroyed another after being ‘jumped.’ He had problems with his oxygen system and crash landed at Hawkinge, uninjured.

Prior to enlisting, Hugh had a variety of jobs. For a year, he worked as an assistant watchmaker at Sole Brothers Jewellers, but was offered a higher salary and went to work at Mitchell hardware as a clerk. After that, he spent 6 months as an attendant at the Imperial Service Station. In January  1940, he took a job as a miner at Kirkland Lake gold mine, but left after 8 months because of the conditions and poor ventilation, moving on to McWright Hargreaves gold mine, who were his employer when he joined the RCAF, on 3rd January, 1941.

Hugh started Course 28 at No.1 Initial Training School, Toronto, on 9th June, 1941, where his maturity and teamwork impressed his instructors. When his flying training began in July at No.3 EFTS, London, Ontario, Hugh worked hard, but lacked confidence. Nevertheless, he continued to make slow and steady progress and was passed onto Course 38 at No.6 Service Flying Training School, Dunnville, commencing 13th September. His instructor noted that Hugh was nervous during tests and graded him as “low average” but he passed the course and was awarded his ‘wings’ on 5th December, 1941.

On 8th January, 1942, McGraw was on his way overseas to England. On arrival, he was sent to No.3 Personnel Reception Centre, Bournemouth. After a few weeks at No.17(P) Advanced Flying Unit, Hugh commenced Course No.17 at No.53 Operational Training Unit, LLandow, on 7th April 1942, where he nearly came to grief twice. On 30th April, he was flying Spitfire IA, X4587, when he undershot the runway on a training flight, touched down on rough ground and failed to open the throttle in time to stretch his glide onto the runway. The undercarriage collapsed and he belly landed on the runway. As a result, it was recommended that his log book be endorsed in red ink with “Gross Carelessness.”

However, McGraw seems to have redeemed himself on the 10th May. During a formation flying exercise, the engine of Spitfire IIa, P8423, started to vibrate and emit white smoke. Losing height, he cut switches and managed a wheels-up landing on a hillside at Brynmawr, causing minimal damage to the aircraft.

A very keen and dependable pilot. Carried out a good wheels up landing under difficult conditions when engine failed.

Hugh McGraw was posted to 402 Squadron, RCAF, and joined them on 9th June, 1942, at Redhill. On 13th August, 402 moved to Kenley, and Hugh flew operationally with the squadron throughout the Autumn until he was killed in action on 4th December, flying Spitfire IX, BS450.

The details of his fate were unknown until after the war when F/Lt. Laronde, of the Missing Search and Enquiry Service found a witness to his crash. M. Clay had seen a Spitfire in combat with four enemy aircraft at 1500hrs on the day in question. It had crashed on his property, “Les Salines” at Les Baraques, in the commune of Sangatte. M. Clay was first on the scene and noted that the downed fighter carried the squadron code AE*R. Sadly, the pilot had been killed by a bullet to the head. His body was taken away for burial, by the Germans, that evening, who laid him to rest at Pihen Les Guines cemetery.

The inscription on his grave reads:

Too well loved to ever be forgotten.

Many thanks to Pierre Lagace. Sources: Service files and RCAF Operations Record Books.