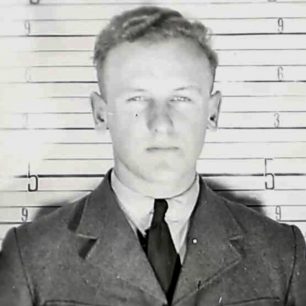 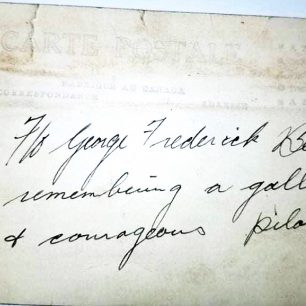 This note from George Beurling belongs to the family of F/Sgt Douglas Stewart 'Curly' Hill, who lost his life while serving at Kenley on 29/11/1942.
Gord Hill 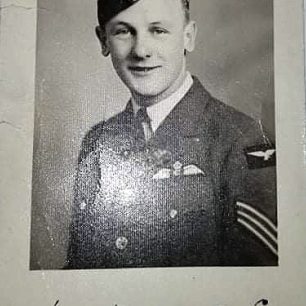 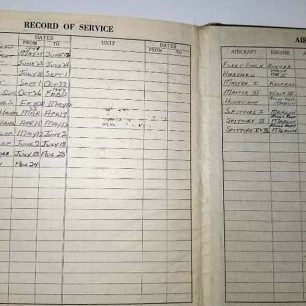 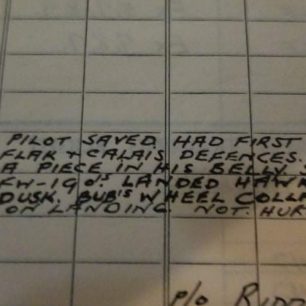 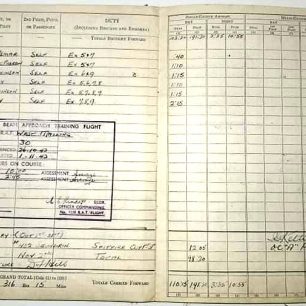 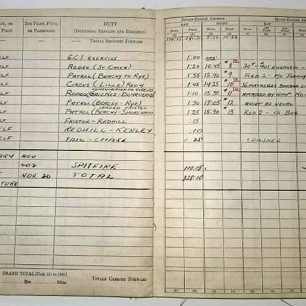 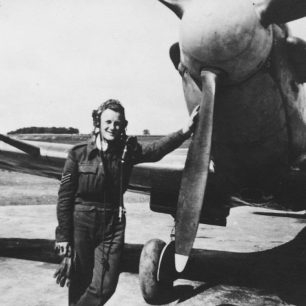 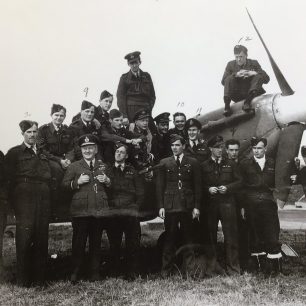 402 Squadron RCAF, during the visit of Air Marshal "Billy" Bishop, on 16th September, 1942. "Curly" Hill is crouching on the wing just to the right of the pilot labelled No.9.
Harlan Perry Fuller via Steve Wise,

On 29th November, 1942, 402 Squadron RCAF took off from Kenley at 9.35am for a Squadron Formation training flight, led by Squadron Leader D. G. Malloy.


Among the pilots taking part was 20-year-old Flight Sergeant Douglas Stewart Hill, in Spitfire Mk.IX, BS316. Everything seemed to be routine, until he returned to Kenley sometime between 11.00 and 11.20am:

During the last 90 degrees of the approach, the aircraft went into an incipient spin at approximately 250ft due possibly to hitting a down draft , at a low airspeed. The aircraft did three quarters of a spin before hitting the ground. It burst into flames immediately, the pilot being instantly killed.

Douglas Stewart Hill was born 22nd February, 1922, in Verdun, Quebec. His Father, Norman Douglas Hill, was born in Whitefield, Manchester, England, and emigrated to Canada in 1912. In 1917, he was drafted for Military Service and served with various units of the Canadian army. He was briefly sent overseas, arriving in England in October, 1918, before returning to Canada the following month. In June 1919, he married Marion Elizabeth Weir, of Montreal, and the couple had two sons – Douglas and Hilton ‘Ross’ Hill, born 1929. Apart from his brief sojourn in the Canadian army, Norman seems worked as a bookkeeper, and was the Secretary Treasurer of the Verdun School Board, in 1941.

Douglas was educated at Riverview and then Verdun High School from 1935. He completed his Grade XI year in 1939 and passed, obtaining McGill matriculation standing. At school, he was a good athlete and considered conscientious and reliable by his teachers.

From September 1939 until February 1941, Douglas worked as a clerk for the Royal Bank of Canada, before taking a job as a linesman for Bell Telephone in March. On 28th May, 1941, he enlisted in the RCAF, at their recruiting centre in Montreal, despite having no experience of flying, not even as a passenger. The recruiting officer sized him up as “good material,” “quiet, well-mannered and courteous” and noted his interest in sports, especially rugby, hockey, basketball and softball. Douglas aspired to becoming an athletic director when he returned to civilian life – an ambition he sadly never fulfilled.

‘Curly’ got off to a good start when his training began in earnest at No.1 Initial Training School, Toronto, on 28th July, 1941. He was recognised as being “commission material,” and passed Course 32, being promoted to Leading Aircraftman on 1st September and posted to No.7 Elementary Flying Training School, at Windsor to commence course 37. In the air, he was a quick learner and although his aerobatics were “erratic” he completed 29.35 solo hours in the Fleet Finch bi-plane trainer, with “no outstanding weakness.” However, on the ground it was a different story – Douglas was “very slow” in the classroom.

Despite this, Hill was passed on to No.13 Service Flying Training School at St. Hubert for Course 41, on 27th October, 1941, where he proved to be “rough on the controls” of the more powerful Harvard trainer and “not very studious” in the classroom. However, it was noted that he was still very young and was likely to improve with maturity. He passed his course and obtained his ‘wings’ on 16th January, 1942, along with a promotion to Temporary Sergeant.

Douglas didn’t have to wait long to be sent overseas – his two weeks Embarkation leave began on 14th February, 1942, and by the end of March he was in England, at No.3 Personnel Reception Unit, Bournemouth, where he remained until mid-May when he was posted to No.5 (Pilot) Advanced Flying Unit at Ternhill for a month.

The final stage of his training began on 3rd June, when he joined Course 16 at No.61 Operational Training Unit. By this point, his natural flair seems to have returned and he was promoted to Temporary Flight Sergeant on 16th July:

An above average pilot who has led a section well and has dash and initiative. He should do well with a commission after a short time with his squadron.

Hill joined 402 Squadron RCAF on 25th August, 1942, although he doesn’t appear in the Operations Record Book until 1st September, when he made his first training flight from Kenley in Spitfire BR636. After five more familiarisation and formation flights, ‘Curly’ made his first operational convoy patrol at 4.50pm on 18th September, with F/Sgt. Harlan Fuller. The squadron kept up a standing patrol between Dungeness and Beachy Head, that day, with each section of two aircraft taking-off at hourly intervals.

He had to wait until 24th for his next operational flight – according to the squadron records, he was ‘scrambled’ at 4.30pm, in Spitfire BS130, but elsewhere the day’s flights were noted as routine patrols.

Early October brought more training flights, including some local flying in the squadron Tiger Moth, along with a couple of patrols. The next milestone for Hill came on 11th, when he took part in his first ‘Rodeo’ – a fighter sweep of 24 Spitfire IX’s from 401 and 402 Squadrons over the St. Omer area – however, ‘nothing of interest’ was seen.

2nd November began with a Ground Controlled Interception training flight with three other pilots, at 11am, followed by another ‘Rodeo’ to St.Omer alongside 401 Squadron in the afternoon. This time the two squadrons of Spitfires, led by Wing Commander Kingcome, were vectored onto several small formations of FW190’s between Boulogne and Le Touquet, but they dived inland and never came within range.

401 and 402 Squadrons were again led by Wing Commander Kingcome for ‘Circus’ 235, on the morning of 8th November. Their task was to provide forward support for 38 B-17 Fortresses of the 301st and 306th Bomber Groups as they returned from Lille, France – this was a much larger operation than anything F/Sgt. Hill had been involved in up to this point. Between nine and twelve FW190’s were seen flying in pairs above and below the wing between the target and the French coast. Yellow section of 401 Squadron engaged the enemy aircraft but came off worse, losing Flying Officer Douglas Russell Manley (killled) and Flight Lieutenant Donald Morrison (P.O.W.), but 402 Squadron returned to Kenley unscathed.

During the afternoon of the following day, Hill took part in his last large ‘Rodeo’ fighter sweep. Kingcome led the Wing into France at Ambleteuse / Audruicq and back out over Gravelines. They turned west and crossed the French coast again near Sangatte, at 25,000ft. Biggin Hill reported that they were engaged in the St. Omer area and would be heading for the Boulogne / Cap Gris Nez area, so the Kenley wing flew to a point north of Boulogne and ran into 6-8 FW190’s who came at them from out of the sun, diving and firing. Engagement was impossible, but again the Wing escaped unscathed. They orbited Gris Nez several times before returning to Kenley.

In the days that followed, ‘Curly’ flew a couple more uneventful patrols with F/Sgt. Fuller. The pair got stuck at Redhill after a morning patrol between Beachy Head and Shoreham on 24th, when the weather closed in on them – they only managed to fly back to Kenley two days later!

‘Curly’ Hill had taken part in a dozen operational sorties when he lost his life on 29th November landing after a Squadron Formation practice. The Operations Record Book noted the incident rather bluntly:

Flight Sergeant Douglas Stewart Hill was laid to rest at Brookwood Military Cemetery, alongside his fellow Canadians, on 1st December, 1942, where the inscription on his grave reads:

Many thanks to F/Sgt. Hill’s nephew, Gord Hill, for sharing F/Sgt. Hill’s logbook and photo and Tony Adams for enhancing the images.