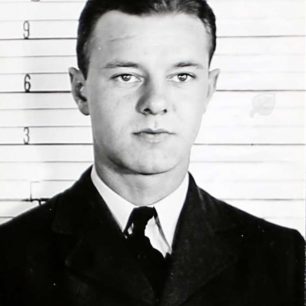 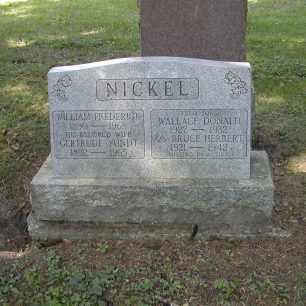 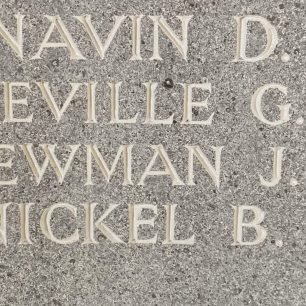 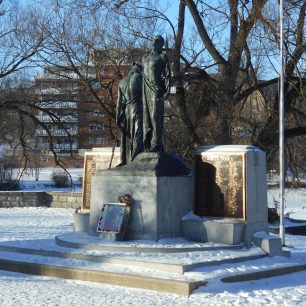 The cenotaph at Startford, Ontario, where F/Sgt. Nickel is remembered.
John. P. Sargeant 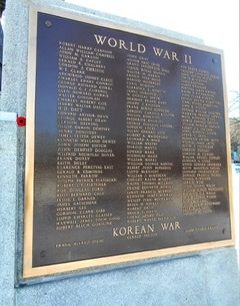 The WWII panel on the cenotaph at Stratford, Ontario. Nickel's name can be seen towards the bottom of the centre column.
John P. Sargeant


They rendezvoused over Kenley and had reached 12,000ft by the time they crossed the English coast at Dungeness, turning south and flying parallel to the French coast to gain more height, with time in hand. Enemy aircraft were reported inland so they turned south of Boulogne, at 25,000ft and climbed towards Audruicq. They had reached 28,000ft when they caught sight of several FW190’s and made a head-on attack from above. However, the advantage of height brought its own dangers – as well as the perils of oxygen failure, 401 found frost creeping over their windscreens, hampering their visibility with disastrous consequences.

The Wing had penetrated about ten miles inland (France) when Sgt. B. Nickel went into a spin and is thought to have crashed, as smoke was seen coming from a spot on the ground shortly after. This was not a result of enemy action and it is thought that Sgt. Nickel must have had some trouble with his oxygen supply, causing him to black out, from which he never recovered. P/O J. W. Fiander and Sgt. H. M. Batters were never seen [after a combat] but ops room reported that they had both baled out over the sea. P/O Fiander was later picked up by the ASR patrol and taken to the naval hospital at Dover where it was found he had been wounded in the left knee. A search was made until dusk for Sgt. Batters but without success.

Bruce Herbert Nickel was born 30th June, 1921, in Stratford, Ontario, Canada. His Father, William Fred Nickel, a Trust Officer, married Gertrude Elizabeth Yundt, in July, 1913, in Perth, Ontario. The couple had five children – Gutave (Harry), Douglas, Wallace, Bruce and Ferne, (the only girl). Sadly, Wallace died, aged 6, in 1932, when he was hit by a truck in Stratford.

Bruce studied for his General Matriculation at Stratford Collegiate from 1934-1940 and then worked as an apprentice machinist at the Canadian Railway shops in Stratford. He enlisted in the RCAF on 17th May, 1941. Unlike many new recruits, he had actually flown before – but only for 10 minutes as a passenger.

After a couple of weeks at No.1 Manning Depot, Toronto, Bruce was posted to No.32 Air Navigation School, Port Albert, in June 1941. On 8th August, he joined Course No.33, at No.1 Initial Training School, Toronto. He passed and was sent for pilot training at No.9 Elementary Flying Training School, St. Catherine’s, commencing Course No.38, on 13th September. He seems to have taken to flying easily but not been so successful with ground training.

Ground training continued to be a problem at No.6 Service Flying Training School, Dunnville, where Bruce took Course No.42, commencing 10th November, 1942. He just managed to pass, but his instructor felt that he had made “insufficient effort.” However, it was a different story in the air, where Bruce really came into his own, obtaining the highest marks in his class for navigation and also scoring above average on instrument flying. His instructor assessed him as a “high average pilot with no outstanding faults.” Nickel obtained his ‘wings’ on 27th February, 1942.

Bruce was posted overseas and set off for England on 20th March, 1942. Like many, he spent a few weeks at No.3 Personnel Reception Centre for Dominion Aircrew, at Bournemouth, before being posted to No.17 (Pilot) Advanced Flying Unit at Watton, Norfolk, on 26th May, for further training. At the end of June, Bruce converted to Spitfires at No.53 Operational Training Unit, RAF Heston, where they thought he was, “a very good, keen type.”

Nickel was posted to No.401 Squadron on 22nd September, 1942 – the day they were packing at Biggin Hill in preparation for their move to RAF Kenley. The operations record book doesn’t appear to record Nickel’s arrival, but he made his first non-operational flight from Kenley on 12th October.  Bruce made three more familiarisation flights, one with Sgt. Evans and another with Sgt. Kinnaird, before his first operational  patrol on 27th October, with Wing Commander Hodson DFC. On 31st, he flew one of 7 Spitfires for an afternoon scramble to Dungeness. During November, Nickel only flew one operational patrol, on the 7th, with Wing Commander Hodson DFC, but was kept busy when the weather allowed,  practicing air firing, evasive action, a line astern chase, a height climb and cine gun practice.

However, all this careful preparation couldn’t  help Bruce withstand the failure of his oxygen system which was the likely cause of his death on 4th December. Bruce was posthumously promoted to Flight Sergeant in October 1944, with effect from 27th August, 1942.

Bruce Herbert Nickel, having no known grave, is remembered on the Runnymede Memorial and his family’s grave marker at Avondale Cemetery, Stratford, Perth County, Ontario.