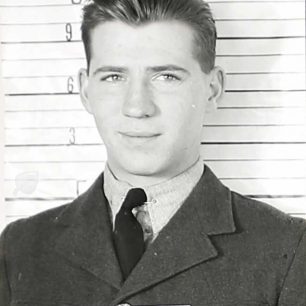 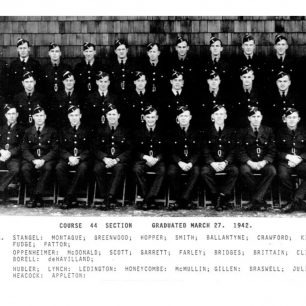 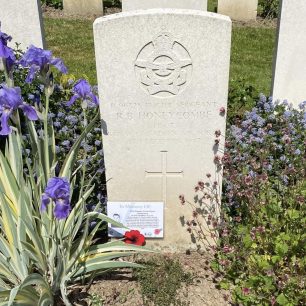 The grave of F/Sgt. Homeycombe. May 2022.
Jane Collman Williams 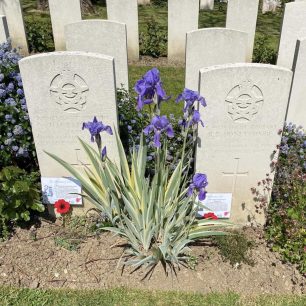 Batters and Honeycombe lie side by side in Longuenesse (St. Omer) Souvenir Cemetery
Jane Collman Williams 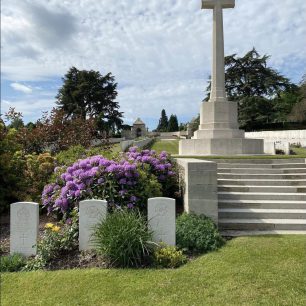 They rendezvoused over Kenley and had reached 12,000ft by the time they crossed the English coast at Dungeness, turning south and flying parallel to the French coast to gain more height, with time in hand. Enemy aircraft were reported inland so they turned south of Boulogne, at 25,000ft and climbed towards Audruicq. They had reached 28,000ft when they were ‘bounced’ and 401’s sections broke formation to take evasive action. Both squadrons were hampered by poor visibility caused by frost on their windscreens. As 401 attacked the enemy aircraft, W/Cdr. Fee ordered 402 to cover their withdrawal over Boulogne at 32,000ft. Sgts. Honeycombe and McGraw were missing after this sortie. In return, Pilot Officer N. A. Keene claimed a victory and Flying Officer H. A. Simpson damaged one enemy aircraft and probably destroyed another after being ‘jumped.’ He had problems with his oxygen system and crash landed at Hawkinge, uninjured.

Richard Byrne Honeycombe was born 5th February, 1922, in Toronto, Ontario. His Father, Harold Richard Honeycombe, died the same year, leaving his wife, Gladys (nee. Byrne), a widow. It appears that she moved to America and settled in Mystie, Conneticut, where Richard was educated at John Mason School. He was very keen on horse-riding and took a variety of Summer jobs during the late ‘thirties. Gladys and Richard re-located to Brooklyn, New York, sometime after Richard left school and he was working for the British Purchasing Commission as a clerk/bookkeeper when he enlisted in the RCAF, on 2nd June, 1941. Some sources list Richard as an American, but his records clearly state that he was a Canadian citizen.

Richard had a special reason to join the RCAF – on enlistment he wrote:

My Father went overseas with the 3rd Canadian Infantry in 1914. At close of war he was a Lieutenant in the R.A.F. I would like to follow him.

Harold Honeycombe had indeed joined up in 1914 and served in France, but by 1916 he appears to have been suffering from various debilitating illnesses that necessitated a series of hospital admissions. In June, 1918, he spent six months on an RAF cadet course at No.1 School of Military Aeronautics, (presumably at Reading), after which he was transferred back to the Army at Witley Camp with the rank of Acting Sergeant, and was subsequently repatriated and discharged in Spring 1919. Richard also gave the reason for his Father’s death, as “war wounds,” but again, the records show that Harold’s death wasn’t due to his military service.

In any event, it was Harold’s service in the Great War that inspired his young son to join the RCAF. At interview, they found him “very intelligent” and his application was accepted.

He passed Course No.34 and was sent on to No.10 Elementary Flying Training School, Hamilton, on 13th October. Here, he had his first taste of flight, proving to be a “good average student.” Although he was weak on aerobatics, his instructor thought he had the potential to be an above average pilot. Richard moved on to Course No.44, at No.6 Service Flying Training School, Dunnville, on 7th December, 1941. He was a quick learner but “inclined to be overconfident,” – on 22nd February he received 28 days detention (with 6 days remitted) for unauthorised low flying. Nevertheless, he was promoted to Sergeant and awarded his Pilot’s flying badge on 27th March, 1942.

Richard’s wish to follow in his Father’s footsteps was fulfilled, with the news that he was to be posted overseas to England. On arrival, in May, he spent about six weeks at No.3 Personnel Receiving Centre, Bournemouth, before heading to No.5 Advanced Flying Unit at Ternhill for further training. On 14th July, 1942, Richard commenced Course 18, at No.61 Operational Training Unit, to convert to Spitfires. He showed above average ability in aerobatics and formation flying, as well as scoring an impressive 94% in ground training for navigation. However, he tended to under-deflect in air firing practice. His instructors praised his “exceptional keenness’ saying he was, “always willing and eager to make himself useful and accept responsibility.”

On 11th September, Richard had been flying Spitfire I, R6835, for 1 hour, 40 minutes, when he found he had no air pressure – it was later discovered that the pipe from the air compressor to the oil seal had fractured. Despite this, he made a good landing at Montford Bridge, but was unable to avoid swerving off the runway because he had no flaps or brakes. The port oleo leg (undercarriage) collapsed inwards and the wingtip struck the ground. However, no blame was attached to Richard.

With his training finally completed, Sgt. Honeycombe joined his first, and only squadron, No.402, at Kenley on 6th October, 1942. He made his first operational flight on 24th – a patrol from Dungeness to Beachy Head with F/Lt. I. G. Keltie. In addition to local training flights, he flew a further eight patrols, one scramble and a ‘Rodeo’ fighter sweep, (led by W/Cdr. Brian Kingcome on 9th November), before becoming one of four Kenley pilots to lose his life on 4th December.

Richard Byrne Honeycombe was posthumously promoted to Flight Sergeant. He lies at rest in Longuenesse (St.Omer) Souvenir Cemetery, next to F/Sgt. Batters of 401 Squadron, who was killed in action on the same sortie.