You are here: Home>History>Timeline of RAF Kenley>1931 - Outbreak of World War II>The Early Hurricanes of No.3 Squadron and the Crash of Hugh Henry-May.

The Early Hurricanes of No.3 Squadron and the Crash of Hugh Henry-May. 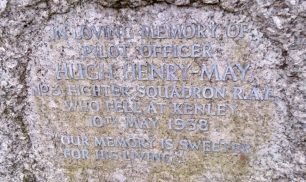 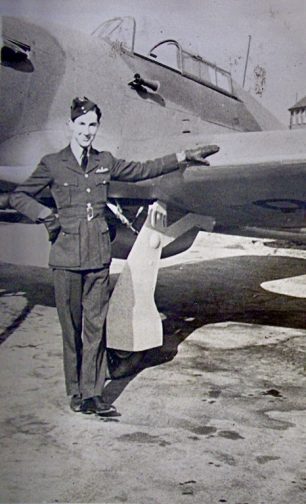 In March 1938, No.3 Squadron were proud to be the second R.A.F. Fighter squadron, after No.111, at Northolt, to get the latest monoplane fighter aircraft, the Hawker Hurricane.
This was the early version, with a fixed pitch wooden twin-bladed Propeller. These aircraft would need every inch of Kenley’s grass runways to get airborne. In fact, locals would hide in the bushes outside the Airfield to watch these modern marvels only JUST clear the hedges on their take off runs!


Problems became apparent when, on the 5th May, 1938, one of the new Hurricanes stalled on take off and was badly damaged. The first fatality came just 5 days later….

On the 10th May, a formation of 3 Squadron Hurricanes, returning from practice flying, were on final approach to land at Kenley, when, at 200 feet, one of them (L1579) stalled and fell to the ground. Twenty year old, Pilot Officer Hugh Henry May was killed  in the crash. Today he lies with many other of his R.A.F. comrades, in St Luke’s graveyard, Whyteleafe.

“I was fourteen years and seven months of age.  Not working during the month in question. I would often visit Kenley, on this occasion it was a fine sunny afternoon, a Tuesday or Thursday.  I arrived about 2.45 p.m..  All was rather quiet, Three squadron was airborne.

Standing near the trees on the South-eastern edge of the aerodrome near the end of the married quarters next to Hayes Lane. A few other persons were also there, plus some children, about eight of us in all.

At approximately 3.45 p.m. the nine aircraft returned in formation from South to North direction turning left into a down wind leg circuit and landing in loose threes.

The ground staff now were meeting their prospective aircraft on the tarmac and we persons were watching the aircraft taxi in, all us us facing North, North-east.

The final three now turning finals over Coulsdon Common, I turned to watch them.  To my horror one of which, perhaps the second from the last, dropped the port mainplane, turned left into a vertical nose down and plunged into the valley out of sight with a muffled crunch. I stood for a moment frozen to the spot, turned to the others watching the aircraft taxi in , and said, “Did you see it?”  “See what?” was the reply. It would seem I was the only person to see the crash, perhaps some small children also, but it was not really apparent.

I then called over to the ground staff, they didn’t see it, in fact two came over to me, requesting directions to the location.  At that moment about six women came rushing out from the back of the married quarters, waving, shouting and some quite distressed. They had seen it.

All this took some five minutes from the time of the crash.  The ground staff, about six of them, went over to the women, then to the site.  The RAF Ambulance arrived, jumping over the rough field to the wire fence at the top of the bank, before the steep slope into the valley.

I waited until the pilot was carried up to the ambulance, that made its way back up to Hayes Lane.  I then proceeded with my bike to the top of the bank, left the bike against the fence, requested permission from a service man, and then down the steep bank I went to locate the aircraft.  I couldn’t find it at first, was walking in the wrong direction.  It was very quiet.

I then came out from woodland into a field and only then did I see the aircraft lying flat on a thick hedge.  The trailing edge was about level with my shoulders, the rear fuse and empenage not a mark on it, as new.  The prop and complete engine assembly had broken off at the cockpit and thrusted forward .  Only the pilot’s seat remained attached to the fuselage bulkhead.

An airman at the site told me the pilot was bleeding from  his ears, nose and mouth and was not expected to survive. I departed the site some 30 minutes later.

About one week later the aircraft had not been moved.  This I viewed from a different location in the valley, known by the locals as the Grass Road, part of which is still there to this day.

The inquest reported in Caterham Weekly Press stated the aircraft touched the trees.  It did not touch any trees. On reflection there are two possible causes.  1.  Asymmetrical flaps; if the port side had blown up from fully down position, owing to system or linkage failure, the aircraft’s position was indeed in this type of situation.  (A well known defect in later years).  2.  Before the nose down plunge I noted a slight turn to port, would expect this was to line up for landing because other aircraft were on the aerodrome.  If at the line up correction the airspeed had been near to the stalling speed, it is understandable the aircraft could have developed a stall turn.

This was a very sad outing for me.  It was the first time I had seen the Hurricane at close range; also nine aircraft in formation.  Also, my last visit to the spot, which was closed to the public soon after, when the new Hayes Lane was constructed.”

It was clear, after this incident, that Kenley would need to be modified to accommodate modern fighter aircraft, and, on 4th July, No.3’s Hurricanes were flown to R.A.F. Digby and exchanged for nine Gloster Gladiators, of No.73 squadron. In the run-up to War, Kenley was enlarged and provided with extended concrete runways, which solved the problem.

We are grateful to Bryan Prosper and Colin Lee for this  account of May’s accident, which was transcribed for Kenley Revival by Monica Bayley.