You are here: Home>History>Timeline of RAF Kenley>1931 - Outbreak of World War II>Pilot Officer William Daniel Disbrey - A Horseshoe for Luck! 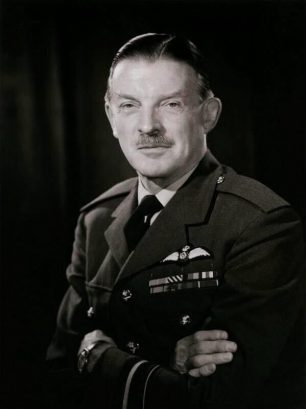 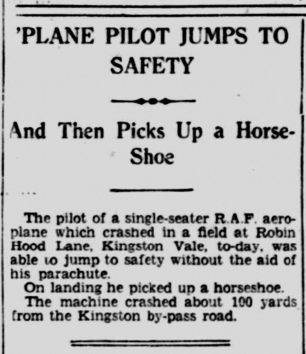 William Daniel Disbrey was born in Hackney, London in August, 1912, the eldest son of Horace William Disbrey, a provision manager, and his wife Frances Mary Disbrey (nee Thornell). At the time the family were living at Kersley Rd, Stoke Newington.

William entered the RAF in 1928 as an apprentice, winning first prize in academic and practical subjects as well as the Lord Wakefield Scholarship and a cadetship at the Royal Air Force College, which he entered as a Flight Cadet in 1931. At Cranwell, he attained the rank of Flight Cadet Sergeant and won the Hyde Thompson and Humanities trophies, as well as representing the College at swimming.

Having obtained his “wings”, he was appointed to a permanent commission on 15th July 1933, and posted to No.3 Fighter squadron, then stationed at RAF Upavon, on the same day. On 22nd March, 1934, he was part of No.3 Squadron’s three man team for a map reading competition at Duxford – they brought home third prize. On 10th May, 1934, the Squadron moved to RAF Kenley and Disbrey was appointed Adjutant to the Squadron five days later.

So far, so good, but Disbrey was about to find out whether Lady Luck was really on his side…

On 24th May, the Squadron Operations Record Book reported that:

Night flying was a dangerous business at this time and Disbrey was indeed fortunate to escape with his life. However, a week later, he wrote off another of the Squadron’s Bristol Bulldogs!

This matter-of-fact description belies the seriousness of Disbrey’s predicament. The aircraft (K2487) had narrowly avoided hitting an oak tree and skimmed over a hedge before crashing into a field about 100 yards from the Kingston by-pass, at Robin Hood Lane, Kingston Vale. Disbrey appears to have escaped relatively unscathed after jumping from the aircraft without the aid of a parachute! However, he must have felt like his luck needed a boost as he picked up a horseshoe on ‘landing.’

From 3rd July, 1934, until 2nd September, he was attached to RAF Leuchars for a Fleet Spotter Reconnaissance Course and subsequently flew with No.823 Squadron of the Fleet Air Arm until 1938, carrying out 270 deck landings, 33 at night, mainly on H.M.S. Courageous and H.M.S. Glorious.

In fact, fourteen of those night deck landings were operational flights carried out during the Abyssinian Crisis in 1936. Some of the others were experimental, and Disbrey’s work contributed to the standardisation of deck lighting. For his efforts, he was awarded the A.F.C.

A few days before war was declared, Disbrey tied the knot with Doreen Alice Ivory at Hitchin, Hertfordshire, and the couple appear to have set up home at 130 Queen Street, Hitchin.

At this time Disbrey was on a specialist engineering course at RAF Henlow   and this training was put to good use in Disbrey’s wartime appointments as Engineer Officer, HQ Fighter Command (1941) and as the Command Engineer Officer for Tactical Air Force HQ (June 1943), HQ 2nd Tactical Air Force (November 1943) and HQ British Air Forces of Occupation (July 1945). On a personal note, Disbrey also became a Father for the first time during the war years, when Doreen gave birth to a daughter in 1942.

Disbrey later served as Director of Engineering, 1964-1967 and Air Officer Engineering, Strike Command, 1968-1970. He retired from the RAF, having attained the rank of Air Vice-Marshal, in 1970, and became Technical Manager of the Training Institute, Airwork Services, Saudi Arabia.

Air Vice-Marshal William Daniel Disbrey C.B., C.B.E., A.F.C., died in Reading, Berkshire, in 2001, an incredibly lucky man to have survived a high number of deck landings, as well as his two mishaps during his time at Kenley. His lucky horseshoe had done its job well.

Rest in peace Sir, and thank you for your service.