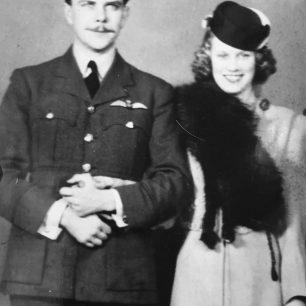 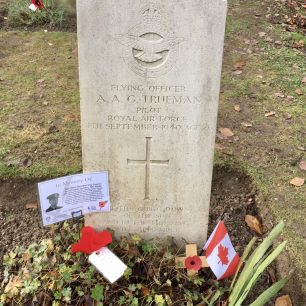 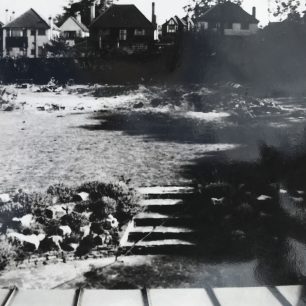 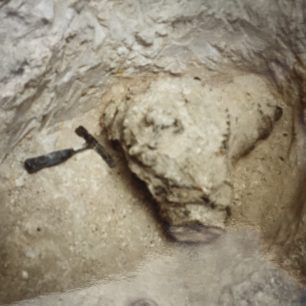 The propeller hub from Trueman's Hurricane as it was found, 11ft below the surface, during the excavation in 1999.
Colin Lee

Alec Albert Gray Trueman was Canadian. He was shot down and killed on 4th September 1940, his Hurricane crashing to the rear of ‘Greenbrowe,’ No.5 Tudor Close, Banstead. Trueman was buried in St. Luke’s, Whyteleafe on 10th September, 1940. His wife gave birth to twins shortly after he died.

Martin Parkes was still a child when he witnessed Trueman’s fatal crash. In 1999, he recalled the event in a letter to Colin Lee:

I remember there had been an uneventful alert that morning and the ‘All Clear’ had sounded. About ten minutes later I was in the front room of our house at Green Curves, when I heard the sound of an aircraft rapidly getting louder and obviously very low. I looked up to see the underside of a Hurricane diving into the ground behind the houses opposite. I suppose the whole episode lasted less than two seconds.

There was the most horrendous sound of the crash followed by flames, smoke and the sound of exploding ammunition. I and my two elder brothers were forbidden to leave the house for about an hour. Eventually, my Father, an army captain home on leave, put on his steel helmet and went to the crash-site with us three boys following a few yards behind.

The plane had come down in a garden immediately behind my great friend’s house, No.8 Green Curves. We went up to his garden and looked over the remains of his fence to see a very large crater. I remember seeing an AFS fireman standing in the pit hosing down a few smouldering remains of the aircraft. The whole area was covered with unrecognisable pieces of twisted metal, none much bigger than your hat. I did recall seeing a hopelessly buckled undercarriage leg and a shredded tyre.

There were three firemen there and a couple of policemen and lots of people like us looking over their garden fences at the ghastly mess. It was very quiet, but there was a heavy smell of oil and glycol. Presumably, by the time we got there the remains of the poor pilot had been removed, because no one at the time knew if the pilot had been on board or not.

I recall standing in the crater a day or so later with my friend Peter Sandal, who now lives in Vancouver; our heads were well below ground level. Looking back at it now, it seems awful, we stood there where that pilot’s life had ended so violently, and we had not given it so much as a thought, but when you are a couple of battle-hardened twelve year olds, you do become pretty callous.

I have often thought of the circumstances surrounding this crash. It has been suggested the pilot was unconscious from oxygen starvation. If you look at the ring of houses surrounding the crash site and liken them to the doubles ring of a dartboard, with Tudor Close extending from the twenty to the bullseye, and that fighter hitting the ground at treble sixteen without so much as breaking a window, then the people in those houses were incredibly lucky. If, as I think, he regained consciousness for a few seconds before crashing and found that he had no hope of escape, he deliberately aimed for about the only empty space available to him. He was incredibly brave and we locals should be exceedingly grateful to him.

Colin Lee led a dig at the crash site in August 1999. They found the propeller hub 11ft below the surface in chalky ground – testament to the high speed and trajectory of the Hurricane’s impact.

Many thanks Colin Lee.