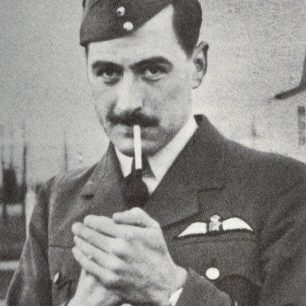 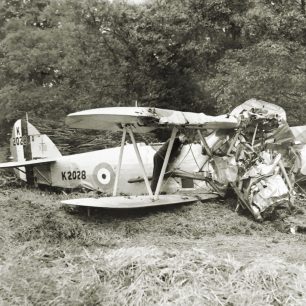 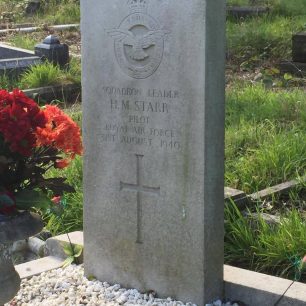 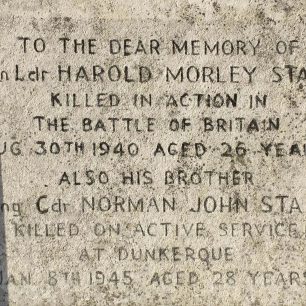 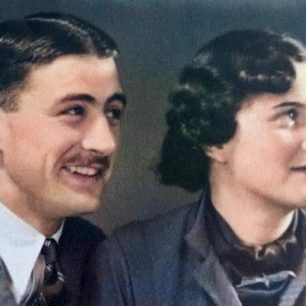 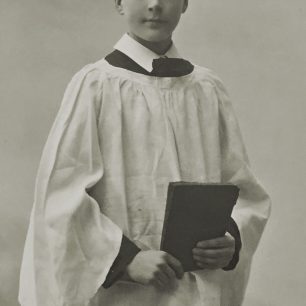 Harold Morley Starr as a choirboy, circa 1915.
Peter Starr Mills 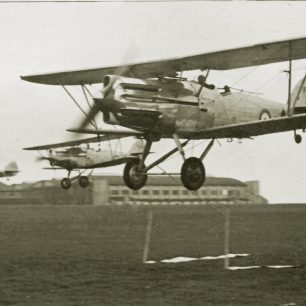 Harold Morley Starr was one of two brothers who both served with the RAF during World War II. Harold was born in Swindon in September 1914. He was the son of Morley Walter Watson Starr and his wife, Ellen Louise (nee Flocks).

Following his education, Harold joined the RAF on a short service commission in March 1934, with his initial training taking place at Sealand. His first squadron posting was to No.13 Army Co-operation Squadron at Old Sarum on 6 March 1935. It was while flying with No.13 Squadron, in June 1936, that his Hawker Audax suffered an engine failure and crashed near South Marston in Wiltshire. Starr suffered serious injuries in the crash and was not expected to survive. Consequently, his leg wasn’t ‘set’ by medical staff and he subsequently walked with a limp. Harold did not return to flying duties until June 1937, again at Old Sarum, this time with No.59 Squadron. He subsequently joined No.2 Squadron at Hawkinge, in January 1938.

After a six month tour as a staff officer at RAF Uxbridge, Starr, by now a Flight Lieutenant, returned to No.2 Squadron at RAF Andover, in November 1939, as a Flight Commander. He was subsequently promoted to Squadron Leader on 1st June, 1940. The following month, Starr was posted to No.6 Operational Training Unit, at RAF Sutton Bridge, for conversion to Hurricanes. On completion of his course he was posted to No.245 Squadron at RAF Aldergrove.

Starr was given command of No.253 Squadron at RAF Turnhouse on 8th August, his predecessor Squadron Leader T. P. Gleave remaining on strength as a supernumary.

No.253 Squadron moved south to RAF Kenley on 29th August, with the squadron commencing operations the following day. Harold Starr’s stay at Kenley was all too brief – his Hurricane was damaged near Redhill during his second sortie on the 30th, but he returned to Kenley uninjured and took part in another sortie later that day.

The following day Starr’s Hurricane was shot down at around 8.25am, on the first interception patrol of the day. He was controversially killed after bailing out –  it was reported he had been machined-gunned in his parachute by enemy fighters. Harold’s body fell to earth at Hammill Brickworks near Eastry in Kent, with his Hurricane crashing some six miles away, at Dene Farm, West Stourmouth.

Sadly, Harold’s death wasn’t the only tragedy to befall the Starr family.


In January 1940, Harold had married Bette Tyler Rees, in her hometown of Wrexham. At the time of her husband’s death, Bette was only a couple of months away from giving birth to their first child.

Bette had travelled to Swindon for Harold’s funeral on 6th September, 1940, and was staying in the Central Hotel in Victoria Rd, Swindon, which was being run by Harold’s older sister, Doris, but she was too distraught to see her husband laid to rest. The funeral was held at Christ Church in Old Town, Swindon, before Harold’s coffin, draped in the Union Flag, was driven slowly through streets lined with mourners, to his final resting place at Radnor Street cemetery.

Six to eight weeks later, Bette gave birth to Harold’s daughter, Carolyn, but the joy of her arrival was tempered by a new worry, for Carolyn was unwell from birth.

To add to Bette’s woes, her newlywed brother, Ken Rees, was shot down over Norway on 23rd October, 1942, during a mine-laying operation. The Wellington bomber he was flying crash-landed into a lake, and Rees, together with two other crewmen, was captured. He was sent to Stalag Luft III, where he gained a reputation for antagonising the German guards, spurred on by thoughts of what had happened to his brother-in-law, Harold. He was later involved in ‘The Great Escape.’

As 1943 drew to a close, little Carolyn gave up her struggle to live, and passed away two months before her third birthday. She was cremated in North Wales and Bette, now serving with the American Ambulance (A.A.G.B.), travelled back to Swindon to scatter her ashes on Harold’s grave.

Tragically Harold’s brother, Norman, also lost his life whilst serving with the RAF. On 8th January 1945, Wing Commander Norman John Starr and three fellow officers were returning from Belgium to England to attend his wedding, when the Avro Anson he was piloting was shot down by anti-aircraft fire from the besieged port of Dunkirk. Norman Starr was buried in Dunkirk Town Cemetery.

Bette never re-married and became a sub-postmistress in North Wales. Her nieces described her as “The Fun Aunt.” She passed away in 1994, aged 77.

Harold and Norman have both been honoured with blue plaques at the site of their birthplace – The Central Hotel, Regent Street in Swindon, which was demolished and replaced by the Savoy Cinema. They were unveiled on what would have been Harold’s 102nd birthday.

Many thanks to Squadron Leader Peter Starr Mills (Harold’s nephew) and Noel Beauchamp.

We are grateful to Peter Starr Mills for the photographs and additional information. Sources: Kenneth G Wynn: The Men of the Battle of Britain. Bruce Barrymore Halpenny: Action Stations 7. Bruce Barrymore Halpenny: Action Stations 9. The National Archives, Kew. London Gazette. Many thanks to Vince Reed for the photos of Harold's grave.

Squadron Swapovers - 615 and 253 during the Battle of Britain