The Art of RAF Kenley 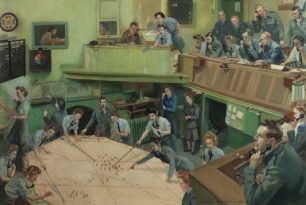 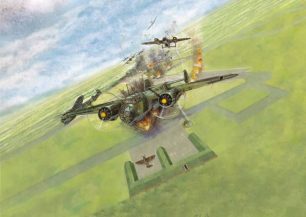 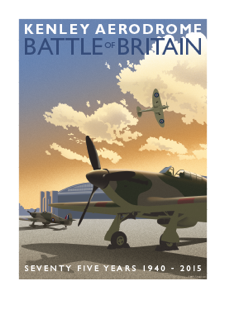 Art is significant, recalling and interpreting every possible aspect of life in many ways. Photos more recently have provided vivid screenshots, widely demonstrated from the portfolio of images depicting life and conflict at RAF Kenley during the Second World War. However, the popularity of photography as a form of art evolving during the 20th century somewhat overshadows other forms of art used to capture life at RAF Kenley, which should receive more recognition, one of these artists even served at Kenley during the war.

Born in 1914, Lilian Buchanan came from an artistic family and established herself as an illustrator. She served in the W.A.A.F (Women’s Auxiliary Air Force) during the Second World War and was based in Operation Rooms of Fighter Groups in Kent as well as at Kenley and Biggin Hill airfields. She was commended by the late Queen Mother at Kenley for her work in the Operation Rooms, which was considered a dangerous but vital job on the airfield.

Her artistic talent was noted at Kenleyand was asked to paint portraits of Canadian pilots based there, many of whom did not survive. These portraits were sent to the pilot’s families in Canada. The most prolific painting however is her painting of the Operations Room at RAF Kenley.  Lilian’s first-hand experience resonates in this painting. The painting captures the demanding environment, some two dozen men and women seen actively engaged in numerous roles. Two significant things to note are the number of women outnumber the men in the painting and also the setting of the Operations Room. Both these aspects are often understated in the RAF when the frontline pilots and dogfights dominate.

Painting can be used to create a reinterpretation of RAF Kenley during the war, even decades later by contemporary artists. One such artist is Mervyn Sullivan who painted from a bird’s eye perspective re-imagining the powerful scene of the aerial bombardment of RAF Kenley from the Luftwaffe on 18th August 1940, during the Battle of Britain. Peter Channon, a friend of the artist lived and learned to fly on the airfield. He and Sullivan collaborated to recreate the scene with immense historical accuracy, from flying above the airfield to gain perspective of the airfield to researching the aircraft and angles the Luftwaffe intercepted the airfield.

ry Weekley, who specialises in aviation art, has done numerous oil paintings and sketches of aircraft ranging from the First and Second World War, including a few paintings of Kenley, one including a Spitfire plane dominating the frame with RAF Kenley visible in the background. The detail is more profound compared to Sullivan’s work, particularly evident in the Spitfire, capturing its sheer beauty, which is not often seen due to few Spitfires being left after the war or often depicted in black and white does not do it justice.

Artist Simon Grant has taken a more unique approach, and has used print to reinterpret Kenley through poster art. It bears a striking resemblance to the work of Fra 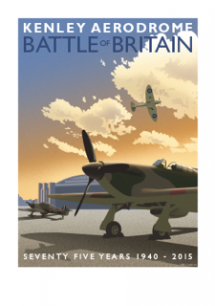 nk Henry Mason, who was best known for his art-deco style vintage railway posters of the 1930s, which has evidently seen a resurge in popularity in memorabilia. Grant’s work is clearly influenced by this style, with simple but bold colours to capture one’s imagination and evoke awe. What’s more is Grant’s use of poster art today creates a tangible link to the importance of propaganda posters during the Second World War, with a contemporary spin. The use of poster art can be seen more widely and catches one’s attention as a result of the bold colours and simple imagery and text. Sometimes, print or a painter’s palette and the artist’s interpretation can create an image which evokes as much admiration and delight as a photograph.