The Kenley team have previously posted about the RAF Kenley Tribute and about how it was moved forward out of the blast pen, the reason the Kenley Revival Project did this was to restore the pen back to its original form with a spine wall running down the middle, as this blast pen was one of the most intact pens throughout the airfield, and had the tribute area inside it. We wanted to write a post that let everyone know a bit about the RAF Kenley Tribute. 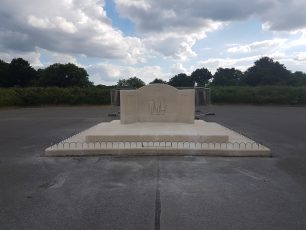 A little history about the RAF Kenley Tribute:

The tribute was originally created as a millennium project, in 1998 the Kenley and District Residents Association (KENDRA) listened to their residents who were asking for a millennium project, and for this to be a memorial of some sort on the airfield; KENDRA member Mike Street headed the project along with Chris Baguley. The RAF Association (RAFA) had a similar millennium project idea, wanting to create something to put on the airfield, in discussion with Chris Baguley RAFA members Ian Croft and Fred Webb joined the memorial project, supporting KENDRA.

Various permissions were needed, and choice of blast pen was decided with the group plus the superintendent of City of London Commons, Mike Enfield and they were given the go ahead. The reason the blast pen that the Tribute is in was chosen was purely because the Hayes Lane entrance to Kenley Airfield is the most popular, meaning a lot more people would get the chance to see it. At the beginning September 1999 the group opened a bank account to accommodate donations, they had already received £5000 from KENDRA and £6000 from Stephen Bungay at this point.

RAFA set out a competition to people, allowing them to design ideas for what the Tribute could look like; Fred Webb won this and designed what the look we have, it was also decided that the name would be the ‘RAF Kenley Tribute’, named this as it stands to pay tribute to all of those that served at Kenley and the squadrons that were there. On 11th September 1999 an appeal to support the tribute, held at the RAFA club, which the local press were present for.

19th August 2000, the RAF Kenley Tribute was unveiled by Air Chief Marshall Sir Anthony Bagnell (Commander in Chief of RAF Strike Command) with around 6000 people attending, the day was ended with a Battle of Britain flight which included a Lancaster Bomber.

Since the unveiling Mike Street continually supported the maintenance of the RAF Tribute, doing this with fundraising. Mike also organised an annual Battle of Britain Memorial Flight flypast on the day of the tribute unveiling and in 2005 and 2010 he organised a full air display at Kenley.

Later in October 2015 the Kenley Revival Project was launched, with many different aspects to it; one of the projects main objectives was to conserve and restore all the blast pens which are listed scheduled monuments by Historic England. Completing this conservation and restoration to the blast pens would mean there was a possibility they could be taken off the monument at risk register that Historic England have.

November 2016 the project begun works on the airfield, including the RAF Kenley Tribute which was being moved forward, allowing for the reconstruction of the spine wall, allowing for the blast pen to be fully restored back to how it would have looked originally. This process took around 6 weeks to complete, starting in April 2017, using an old method of a winch and pulley which means the work was rather delicate as the stone will need to be lifted carefully to mean there is no damage. 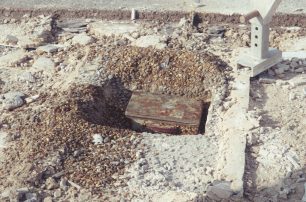 During the process of moving the RAF Kenley Tribute a time capsule was found underneath, this was originally placed under the RAF Kenley Tribute by Mike Street when it was being built, serving 17 years within the stone it had suffered some deterioration, the outside was quite rusted this sadly allowed for the items inside to become deteriorated as well. Found inside the time capsule were a variety of objects; including an RAF gyroscope, several different coins, an original RAF tribute committee leaflet and a policeman’s badge. 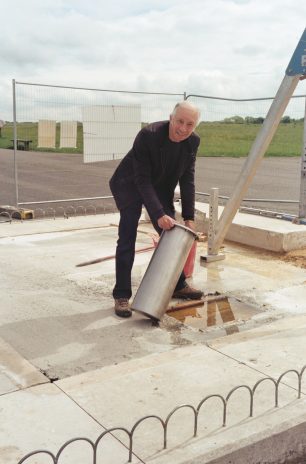 Now if you visit the RAF Kenley Tribute you can see an additional tribute the Kenley Revival Project have made to the pen, having the outlines of both a Spitfire and a Hurricane within the walls of the blast pen, showing the size of the planes and how they would have sat within the pen while waiting to be scrambled.