You are here: Home>History>Women at War>Women's Services in the War

Women's Services in the War

Women's Services in the War

With the outbreak of WWII services looked towards the women of Britain to commit themselves for the war effort, similarly in WWI women would take work on the farms, factories and in civil services, whereas normally all jobs like this would be reserved for men.

A massive variety of jobs opened up opportunities for women to explore skills and interests that they may not have been able to show before; women played a huge part in sustaining the land while men would be fighting for their country. 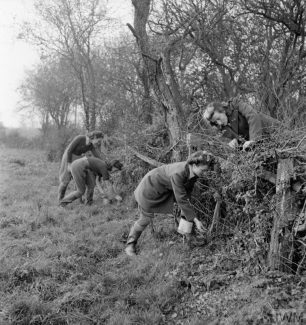 Land Girl Rat Catchers at work as part of their training on a Sussex farm. In the background Audrey Prickett and Betty Long plug a rat hole after inserting poison and in the foreground Eileen Barry lays some bait, as Audrey Willis leans over the hedge to check she is doing it properly. © IWM (D 11256)

The Women’s Land Army, or as they were known ‘Land Girls’, were positioned in various farms up and down the country, originally set up for WWI they were rebooted again in 1939 with WWII looming, by August 1940 only 7,000 women had joined, which was not as many as hoped, however with Hitler’s U-boat, this caused for a major necessity in working the land with fears that the U-boat attacks would starve the country. The WLA was advertised in a glamorous way, as most of the advertisement was suggesting it to be a glorious thing for women to do, however the truth of it was these women living in small farm cottages, a lot of the time without running water or gas; apart from this the WLA did have a good supply of food as they were in the countryside where many hares, pheasants and rabbit could be found.

Many women thought it would be good for them to work in many of the different factories up and down the country. These factories could be the production of many different things from uniforms, to ammunition or aeroplanes, working incredibly long hours. If the women were skilled enough they could be earning up to £2.15 a week, this may have seemed good to them, however men would have be earning around double that amount for the same jobs, women later realised that this was unacceptable and they were actually doing the same good work a man would, so at the Rolls Royce factory in Glasgow the women decided to go on strike, which was not taken too well as it was seen as unpatriotic during war time; this did however end with the women being paid the same as a semi-skilled male worker, which was definitely a positive for the women workers.

Another role women would have got involved with was the Women’s Voluntary Service, these women were mainly providing the fire services, and others that needed it with tea and refreshments, a lot of the time during a clear up of a bombing or similar, by 1943 the WVS had nearly 1 million members, also as most of the younger women would be at work on the farms or in the factories, they would be too tired to help with the voluntary service too so most of the women that were involved with the WVS were older. Something else the WVS would do was giving support to those who had lost their homes from raids and were in shock from the loss, also many of the women would knit socks, balaclavas and more for the service men. 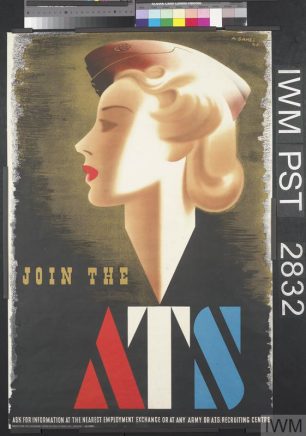 The Auxiliary Territorial Service was one of the military roles a woman could have the opportunity of joining, women had the chance to work in the army, air force, navy and could be appointed as air raid wardens. The ATS were within the army, women would wear the khaki uniforms, just like the men would. Similarly to the Land Girls, the recruitment posters were extremely glamorous looking, many women joined the ATS believing it would be glamorous work, however it was far from it, women would be drivers, cleaners and even work in the mess halls preparing food. Order made by Winston Churchill was to not allow women to fire any form of gun, his reasoning for this was he thought women may not be able to cope with the thought of shooting and possibly killing young German men. By July 1942, the ATS had 217,000 women that had joined, also as the war continued women slowly were given the chance to do jobs such as welding or carpentry, which were more exciting. 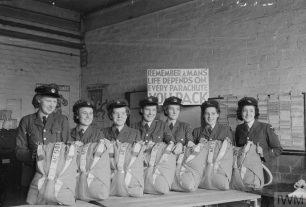 Women who joined the Royal Air Force would be a part of the Women’s Auxiliary Air Force, active in the First World War from 1918 which it was then disbanded in 1920, later to be reformed in 1939 when a second war seemed imminent. Initially WAAF’s were given the jobs of kitchen orderlies, drivers and even clerks; however later duties changed to things such as, telegraphy, interpretation of codes and ciphers, mechanics, electricians and more, the only job the WAAF were not allowed to do was flying, however in 1940 the Air Transport Auxiliary which allowed a select few women to transported RAF planes from factory to fighter squadron bases. Some WAAF’s had the job with new radar stations used to trick incoming enemy bomber formations, these stations were usually one of the first target the Stuka dive-bombers had meaning these WAAF posts were one of the most dangerous.

Some women became members of the Special Operations Executive; these meant that women were acting as secret agents, usually being parachuted into occupied France to bring back intelligence. These women would be risking being captured, torture or even death by becoming a secret agent; their work would support allies with the planned landings in Normandy June 1944.

By the time the war ended in 1945 there were around 460,000 women in the military and over 6.5 million in other war services, without these contributions our war effort would have been completely different and most definitely weaker, and possibly unable to fight as well as we did without these women.