The Air Transport Auxiliary (ATA) was a civilian organisation set up during World War II to ferry new, repaired and damaged military aircraft between factories, assembly plants, maintenance depots and so on to active service squadrons and airfields, as well as transporting service personnel on urgent duty and performing some air ambulance work.

Originally intended to carry personnel, mail and medical supplies, its pilots were soon in demand to work with RAF ferry pools in the transport of aircraft and by 1st August 1941 had taken all ferrying responsibility, freeing up much-needed pilots for combat roles.

In November 1939, Commander Pauline Gower was given the task of organising the women’s section of the ATA. The first eight women were accepted into service on New Years Day 1940, initially cleared only to fly Tiger Moths. They were Joan Hughes, Margaret Cunnison, Mona Friedlander, Rosemary Rees, Marion Wilberforce, Margaret Fairweather, Gabrielle Patterson, and Winifred Crossley Fair. Although at first seen as less-skilled than their male counterparts, in time they fly all types of aircraft, from Hurricanes and Spitfires to four-engine heavy bombers such as the Lancaster and Flying Fortress.

In World War II the ATA flew 415,000 hours and delivered more than 309,000 aircraft ranging from smaller planes such as the Spitfire and Mustangs to heavy bombers such as the Lancaster and American B17 Flying Fortress. 174 men and women pilots of the ATA were killed during the War – around 10% of the total who flew for the ATA. Initially, as the pilots were civilian and/or women, the aircraft were ferried with unloaded guns or other armaments. However, after encounters with German aircraft in which the ferried aircraft were unable to fight back, RAF aircraft were then ferried with guns fully loaded.

The ATA had women who were (almost) all young, and sound of mind and body, and were unsuitable for combat duty because of their gender, although many had as much, if not more, experience of flying than their male counterparts. According to one of the best women pilots, Gabrielle Patterson, there weren’t many of them because until 1938 “women pilots hitherto have consisted only of those with large enough bank balances”. Gabrielle Patterson helped to set up the Civil Air Guard which offered subsidised flying lessons for the less well-off, although hadn’t managed to complete their “A” licence before civilian flying was stopped at the outbreak of WWII.

The ATA was one of the few diverse organisations during the War – apart from accepting women as well as men, there were disabled pilots, older pilots and people of many nationalities, including from neutral countries. There were 28 different nationalities who flew with the ATA. Women were paid the same as men of equal rank – the first time that the British government had allowed equal pay for equal work for an organisation under its control. At the same time, American women flying with the Women Airforce Service Pilots (WASP) received as little as 65 per cent of their equivalent male colleagues.

The role of the ATA was vital to the success of the RAF in WWII and to the outcome of the war. As Lord Beaverbrook said at the disbanding of the ATA on 30th November 1945, “Just as the Battle of Britain is the accomplishment and achievement of the RAF, likewise it can be declared that the ATA sustained and supported them in battle. They were soldiers fighting in the struggle just as completely as if they had been engaged on the battlefront.” 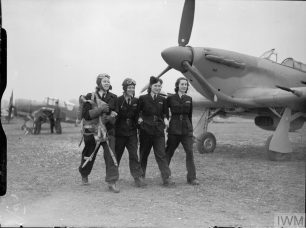